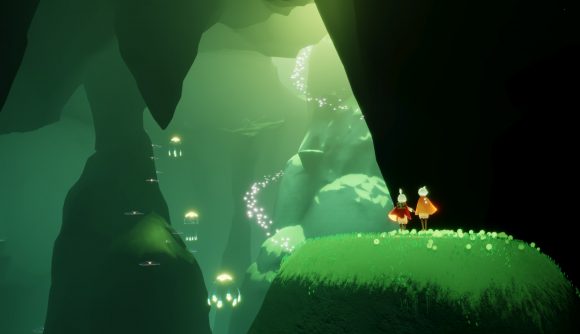 thatgamecompany’s social adventure game, Sky: Children of the Light, has achieved 20 million downloads since its launch back in July 2019. Sky’s official twitter revealed the news, with the promise of in-game celebrations and events, because, as you might surmise from the release date: Sky is almost one year old! That makes 20 million downloads all the more impressive.

Some of the celebrations on offer include an in-game event – details of which will follow – a special anniversary hat, the new ‘season of sanctuary’, and, if that wasn’t enough, official Sky merch is finally launching – for all of you who’ve been waiting to get yourself a flying poncho.

For those of you unaware, Sky launched last year on iOS to critical acclaim, and came to Android earlier this year. The game’s formula of social interaction, flight, as well as puzzle and platforming elements garnered it great praise – including in our own Sky: Children of the Light review, which you should read if only for the excellent pun ‘flying colours’.

You can see the original tweet below with info about the anniversary:

Just in time for Sky’s one year anniversary, #thatskygame has hit 20 million downloads! Keep an eye out for more festivities and announcements next week, including:

I, for one, would like to say happy birthday, Sky! It truly is a beautiful platformer, mixing elements of different game formulas to create something entirely new. If you want to see what all the fuss is about, you can download Sky: Children of the Light on Google Play and the App Store.

If you want to know how to make the most out of the Season of Sanctuary, or just how to play Sky, be sure to check out our Sky: Children of the Light guide. Also stay tuned to Sky’s official twitter account for more info related about the anniversary jubilations!