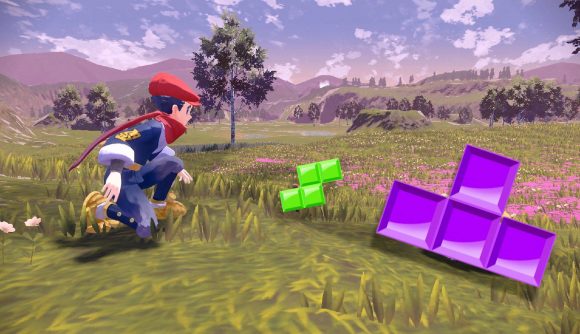 Tetris 99 just doesn’t seem to be slowing down, and has another fantastic crossover lined up for later this month. This next event showcases a theme based on Pokémon Legends: Arceus, promoting the release of the game on January 28. The latest collaboration will feature art, tetrominoes, and music, all based on the upcoming open-world adventure Pokemon Legends: Arceus.

The event starts at 07:00 Friday, January 21 GMT/23:00 Thursday, January 20 PT. It then runs the whole weekend until 07:00 Tuesday, January 25 GMT/23:00 Monday, January 24 PT. Just make sure you compete in matches and earn points if you want to unlock the brand new theme. You need 100 points in total to unlock it, so if you can snag that elusive win you’ll be well on your way.

This is just one part of this month’s promotions for Pokemon Legends: Arceus, the next outing in the Pokémon franchise, and a huge step forward from its classic RPG roots. If you want to stay up to date with it, be sure to check out our Pokémon Legends: Arceus release date guide for more information, including new Pokémon, and much more.

Keep an eye on Nintendo’s social accounts for further looks at the upcoming theme down the line.

If you just can’t get enough Pokémon action before its release, be sure to check out our Pokémon Legends: Arceus new trailers guide to see all the latest footage in all its glory.