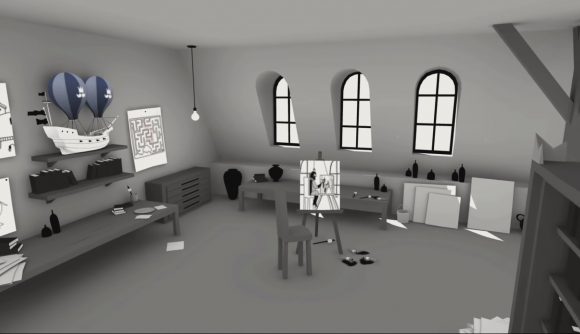 Annapurna Interactive has released the artistic adventure game, The Unfinished Swan on iOS. The game was originally developed by Giant Sparrow, now famous for the popular indie title, What Remains of Edith Finch, and was actually the developer’s first game.

The Unfinished Swan sees you step into the shoes of Monroe, a ten year old orphan who is chasing a swan that escaped from a painting, and ran off into a mysterious storybook kingdom. You traverse the world in chapters, using paint to find a path through different regions, but also encountering all sorts of strange and wonderful characters in search of the eccentric ruler who built the realm.

The Unfinished Swan was originally released on the PS3 back in 2012, and though it’s also available on PS4, never made its way to PC. The game was highly praised, though, and even won two BAFTAs in 2013: one for game innovation, and the other for best debut game. It’s exciting to see The Unfinished Swan make its way to mobile, as we think the walking-simulator-esque format will really suit the platform.

If you want to watch some gameplay for yourself, check out the original launch trailer below:

If you’re looking for some other similar titles, see our best mobile puzzle games guide, or our best iOS games list!