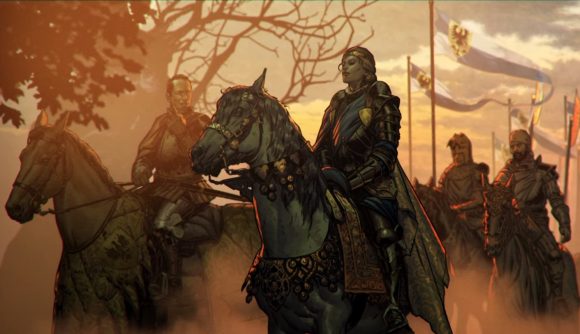 CD Projekt Red, in a sudden turn of events, has launched Thronebreaker on iOS. No one seems to have known that The Witcher RPG was coming to mobile, but it’s a pleasant surprise nonetheless! You can also download Thronebreaker on the App Store right now, for those of you that can’t wait. Since Gwent: The Witcher Card game launched on mobile not so long ago, we’ve been waiting for Thronebreaker news, as a deck building RPG that uses the same card system – check our Gwent review to find out more!

CD Projekt Red originally developed Thronebreaker as the story mode for Gwent, before deciding to create The Witcher Tales and spin it off into its own game. We’re glad it did, though, as Thronebreaker is both an excellent RPG and deck building game.

For those that don’t know, Thronebreaker follows the story of Queen Meve, a beloved character from the books who knights Geralt, hence his ‘of Rivia’ title. Her story involves traipsing across The Continent, trying to reclaim her kingdom, as, all while, the second Nilfgaardian war rages around her.

You can watch the iOS release trailer below if you want to see how it plays:

In celebration of Thronebreaker coming to mobile, CD Projekt Red are giving away a set of rewards, including the soundtrack, some concept art, and an annotated map of Lyria – one of Meve’s kingdoms. Gwent players can also claim some benefits from jumping into Thronebreaker, such as unique ornaments, and 20 new cards.

We’re excited to see Thronebreaker finally take its rightful place on mobile, as a game that is perfectly built for the platform. If you want to find out more about creating the art of The Witcher universe, we spoke to Gwent’s art director not so long ago about creating Gwent’s card art – check it out!