I don’t know about you, but I’ve been disappointed enough times by big mobile releases that, when looking at the promotional material for Tower of Fantasy, I was pretty sure it was too good to be true. However, after gaining access to the closed beta, this exciting, fresh, MMORPG blew my expectations out of the water.

Naturally, it’s a beta build, meaning there are plenty of unfinished features such as only a handful of characters having voice lines, no shop access (so I can’t fully comment on the monetization practices), and some stuttering, performance issues, and bugs. However, despite its rough outer layer boasting a few scratches due to its unfinished state, there’s clearly a brilliant, shining gem within, and I’m so pumped to see the final product.

Tower of Fantasy is based around a truly exciting and engaging futuristic, post-apocalyptic world, where robots, drones, jetpacks, and monsters are a normal part of life. As with many RPGs, you take the role of an amnesiac wanderer, and a newcomer to a small settlement that helps you as you awake. As much as the tried and tested fish-out-of-water format has become something of a cliche these days, it works well here, as you’re introduced to the world along with your character.

What I’ve seen of the lore so far is super interesting, though parts are fragmented due to work-in-progress translations and the occasional dialogue box glitch that leads to text running vertically off the screen. Despite the breathtaking settings and vibrant characters, the central conflict revolving around an outbreak of something called Omnium which causes humans, animals, and plants to gradually transform into aggressive, dangerous beasts unless they have an active suppressor equipped adds a sense of peril to the gameplay, and is the perfect set up for some touching and hard-hitting moments. 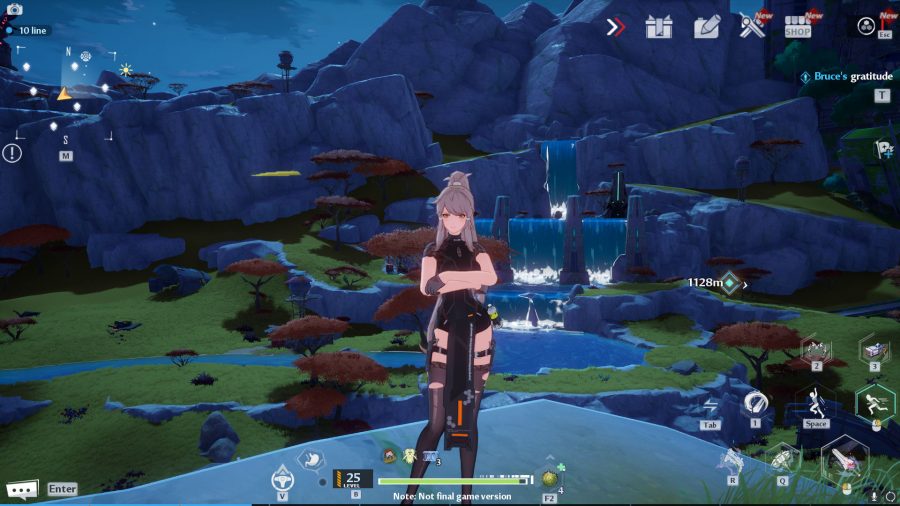 The gameplay is extremely fluid and fun, and offers plenty of variety which has kept me well entertained throughout the many hours I’ve spent playing so far. While there are plenty of core story missions and side quests common to all modern MMOs and RPGs, the world feels highly populated and interactive, and there’s constantly something going on, even though it’s currently a beta build. I’ve frequently found myself getting sidetracked by puzzles, chests, enemy camps, and more while on my way to a mission location, and the exploration continues to feel rewarding even as you progress past the early stages.

Exploring is made significantly easier through your vehicle – a glowing bike which can easily be whipped out and put away at the press of a button. Controlling the bike is a little tricky on mobile with touch screen controls, but with the addition of a controller or on the PC build it’s much more comfortable. You can also climb most surfaces, with controls and stamina usage reminiscent of Genshin Impact. 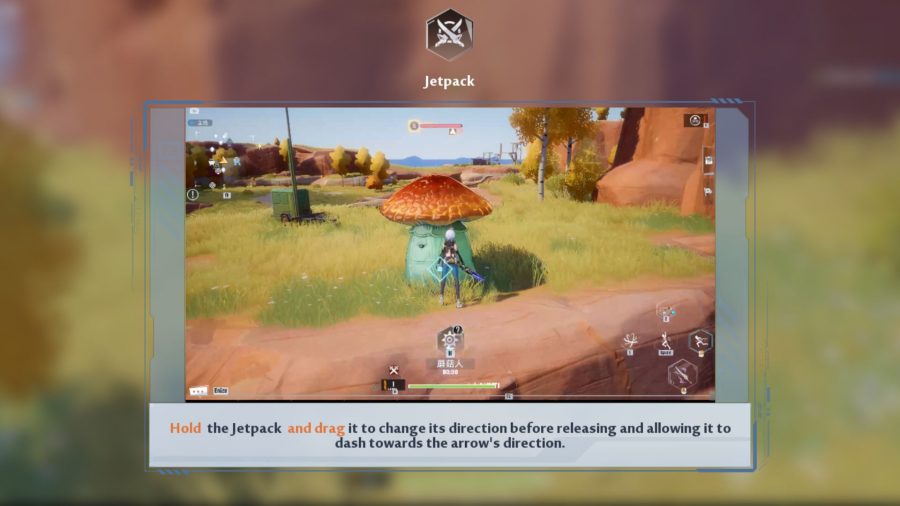 In general, most of the open-world exploration feels similar to Genshin – though instead of a wind glider, you have an equipable jetpack. This has its pros and cons, as the jetpack allows for substantial vertical movement, though I find it can be tricky to adapt to and I certainly struggled to make the most of it, meaning I often resorted to simply driving or climbing instead.

Combat in Tower of Fantasy feels great. The snappy combos, decent targeting system, and powerful moves, all enhanced by vibrant, explosive effects make you feel truly powerful, even when you’re just smacking a rock. Instead of having a set of abilities or spells bound to characters, as is the norm in most MMORPGs and gachas, your skills are tied to your weapons. You can equip three weapons at once, each with its own normal and charged attacks, sprint-attacks, and their own unique, cooldown-based skill. 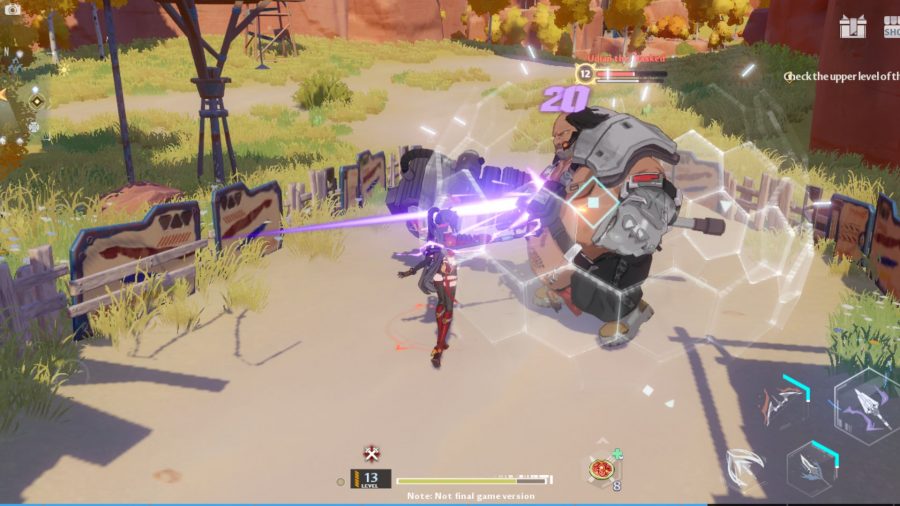 As you fight with one weapon, your other weapons charge. When the gauge is full, switching your weapon unleashes a powerful attack specific to the weapon you’re changing to. For example, Rosy Edge (SSR Meryl’s weapon) has you slam the ground, causing it to erupt with huge ice crystals that form a wall around you, damaging enemies in an AoE. Naturally, the most powerful weapons are locked behind SSR characters (called Simulacra), but once you obtain them, you can equip them to any character you like.

The variety of weapons is really enjoyable, from the heavy-hitting blows of Ene’s Pummeler to the quick, frenzied shots of Samir’s Dual RM Stars. However, due to skills being tied to the weapons and the lack of variation between the Simulacra, the main goal of pulling characters on the banners is to unlock or upgrade weapons, leaving the Simulacra as little more than (very pretty) avatars to run around the world with. 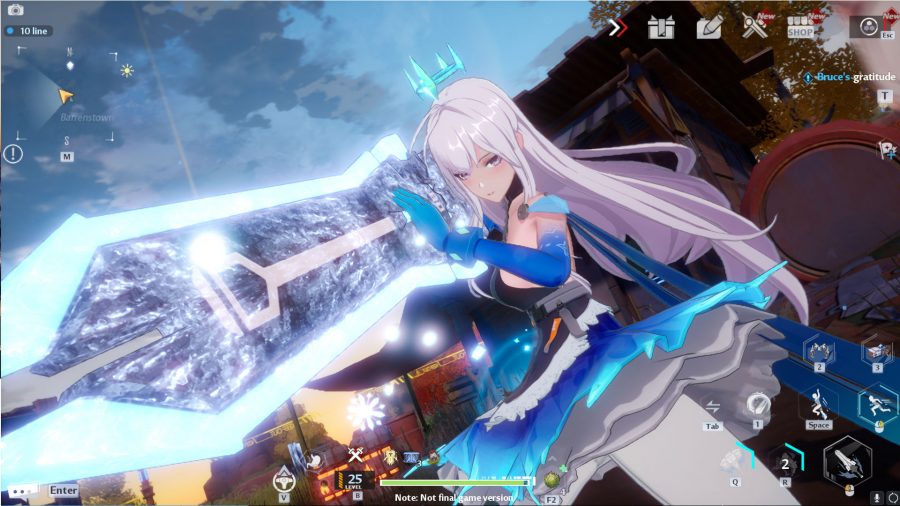 This has its pros and cons. As stated above, the ability to equip super-powerful weapons to your favourite character, even if they’re a lower rank, is really cool. However, it also strips away some of the playstyle variation present in other titles – there’s no mage, brawler, or assassin class here, it’s all about which weapon you equip. I honestly don’t have strong feelings about this either way – it’s just different. Combat is still very fun to me, and being able to switch my weapons to change up my playstyle keeps the gameplay fresh in my eyes

You can upgrade weapons, both by leveling and ascending them through the use of specific materials acquired from gacha banners, missions, exploration, and by equipping them with matrices. Matrices appear to have a similar function to Genshin’s artifact sets, or Monster Hunter’s gem and equipment bonuses, where you need to equip a specific amount of the same kind in order to gain their benefit beyond the base stats they hold. For example, equipping one R-rank Standard Operation Matrix to one of your weapons gives you a small boost in attack and HP, whereas equipping three of them also gives you a boost to the damage dealt by volt weapons. 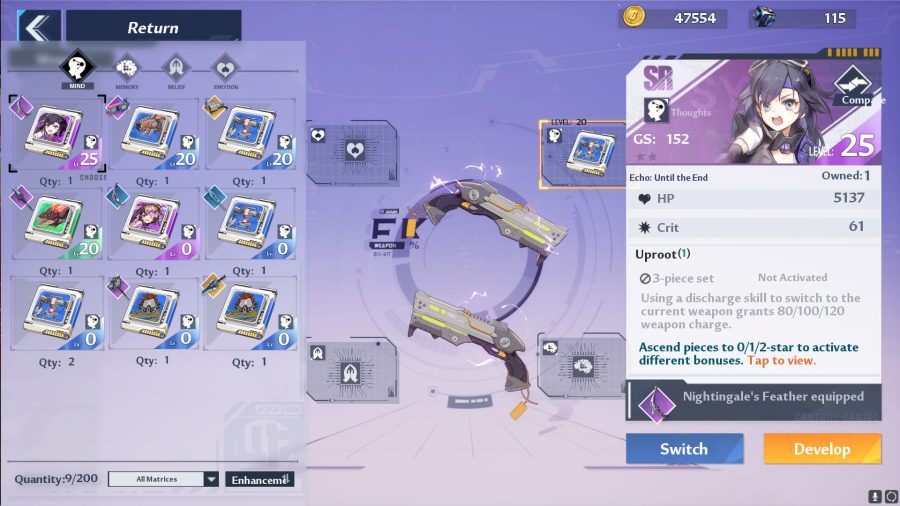 There's a vivid sense of life to the wide, dystopian world you explore

Honestly, when you combine the different weapons, upgrade materials, Simulacra, Matrices, and all the other unique currencies (believe me, there are a lot of different currencies), the game gets a little murky. There are currently five banners running simultaneously – three character/weapon banners, and two Matrix banners, all with their own unique currencies. At the moment, I feel these features are not particularly well explained, and that they pose a serious learning curve for any players who are new to the world of gachas.

However, the rates seem similar to Genshin, which I personally find to be quite forgiving compared to other gacha games. For each banner, you’re guaranteed an SR or an SSR every ten pulls. The Matrix banners also offer a pity system that guarantees you an SSR every 40 pulls, whereas the weapons/Simulacra banners guarantee you an SSR every 80 pulls. 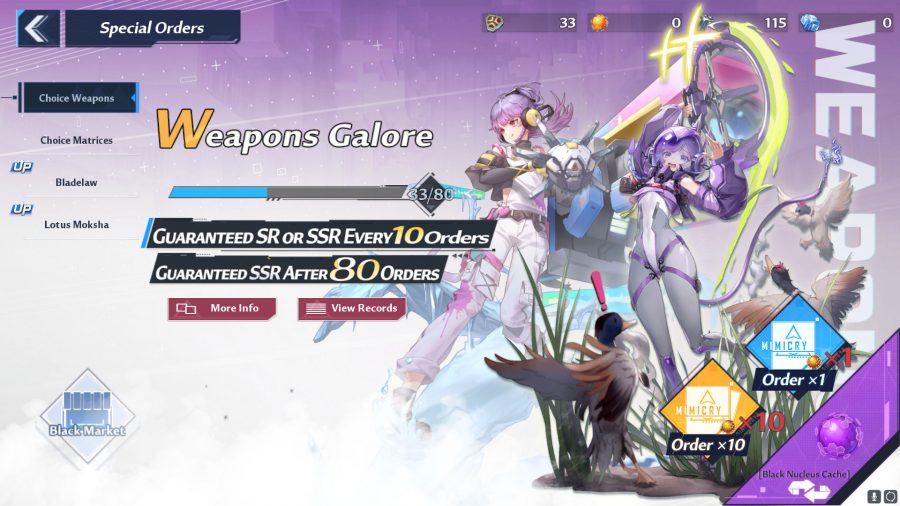 If you’re an MMO or RPG fan and are confused by all that gacha-speak, I’m sure you’re not alone. As such, I hope that Hotta Studio does a better job of explaining all of these currencies and banners to make it more inclusive for players unfamiliar with such systems.

In the way of graphics and performance, I’m extremely impressed with Tower of Fantasy so far. Naturally, due to its pre-release build, there are moments of stuttering and a few bugs, especially during cutscenes, but overall I find both the mobile and PC clients run smoothly for the most part. The characters, enemies, weapons, and environment designs are really gorgeous, managing to bring a beautiful sense of vivid life to the wide, dystopian world you explore. The variation between environments is also striking, from wide, grassy plains and mountains, to snow-capped peaks. 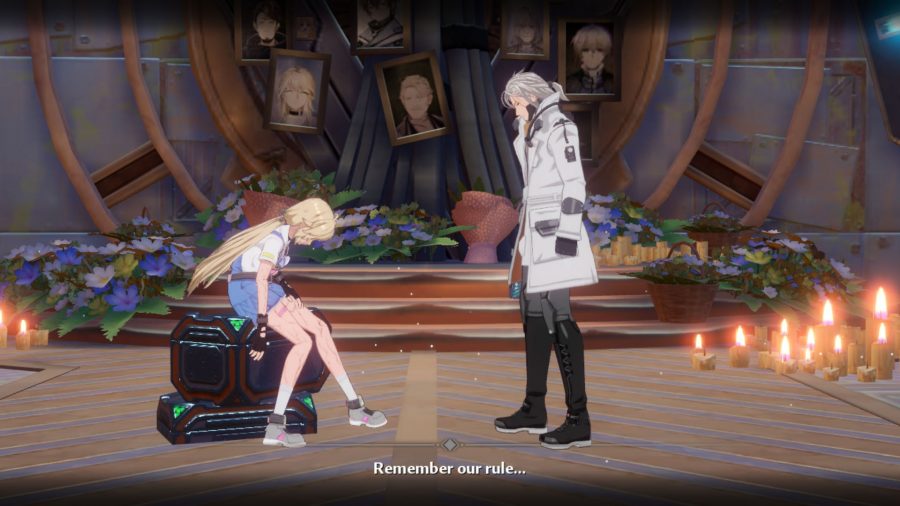 Every character I’ve interacted with, whether plot-essential or background NPC, has had an interesting design befitting the place they live, and the Simulacra are gorgeous. I especially love Ene’s cyborg-esque design, see-through torso, and mechanical spine. I hope to see more male characters in the future, as the roster is currently very female-heavy (and I’m totally not just desperate for a playable version of Zeke…). Regardless, Hotta Studio has done a brilliant job of bringing these fantastic, futuristic anime designs to life in a 3D world.

Tower of Fantasy’s sound design is also lovely, with beautiful orchestral tracks and sound effects that fit perfectly in with the environments and situations you find yourself in. While the English voice acting is not complete yet, the parts that have been dubbed are well-acted and emotive, and the dialogue feels relatively natural for a translation. Additionally, the snippets of lore and fun charts attached to each Simulacra truly help you to bond with the characters. 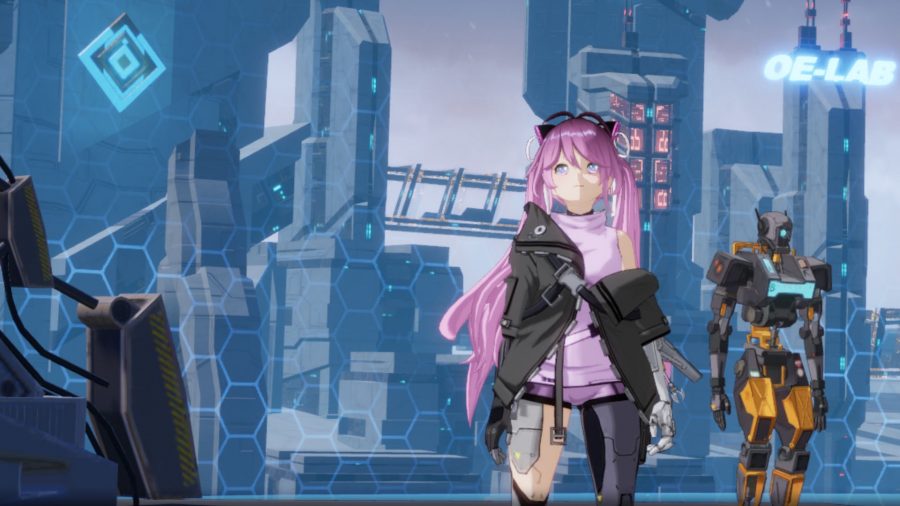 I have a lot of thoughts about Tower of Fantasy. In fact, this game has managed to wedge itself into my mind since I first dove into its world. It’s always tough to comment on a game so long before its full release, but, honestly, I’ve enjoyed every moment I’ve spent in this world so far. From its unique combat system and vibrant, lively world, to its fun characters and deep lore, I’m extremely excited about the future of Tower of Fantasy. It has so much potential and is so much fun already, I truly believe it could be one of the next big things, and I can’t wait for its full release.