Video games are often placed under tight scrutiny when they’re discussed in a narrative form. While certain games like Tetris or Snake can survive on gameplay alone, it’s rare that a game without a sliver of story sneaked in. Whether it’s as simple as ‘aliens want to invade’ or ‘frog crosses the road’, even in Pac-Man, the ghosts all have a back-story and name.

With the line between different forms of media straining ever thinner, some games blur completely between play and publication. While a number of visual novel games land firmly in the gaming camp, adding text-heavy commentary to complement various styles of gameplay. On the other end of the spectrum, there’s pure story-telling with minimal active input from the player.

Whichever your preferred style of narrative-based game, commentary heavy experiences are often best when you can dip in and out of your chosen tome while relaxing on your sofa or bed. Put simply, visual novels were made with portable devices in mind. From the purest perusing playables, to some that are lighter on the syntactic action, we have the best visual novel games for your preferred portable platform.

Now, let’s get into our list full of the best visual novel games on iOS, Android, and Nintendo Switch. 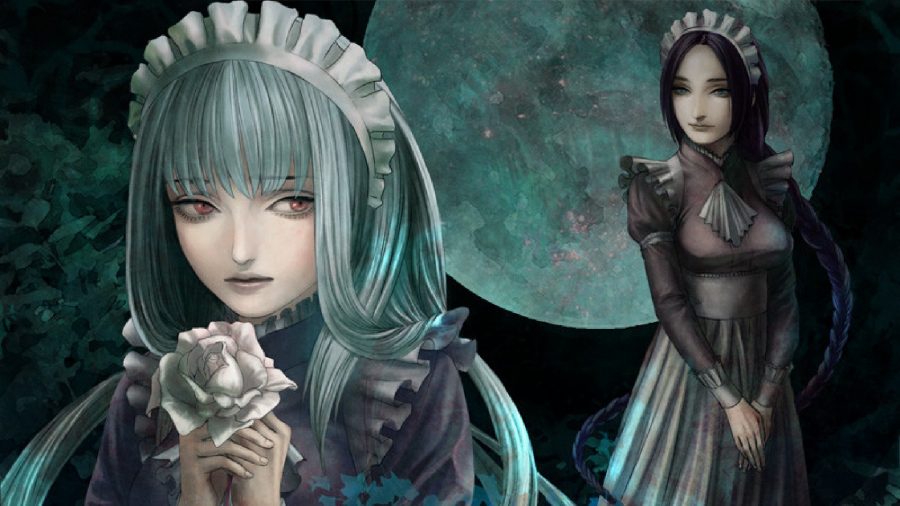 While The House in Fata Morgana gifts players with just a smattering of interactable dialogue choices, they have very little impact on the story. Yet the game suffers little. Before we even speak of the scrumptious story-telling, let’s explore its delicious packaging. The hypnotically dreamy soundtrack transports you into the house’s fantasy world, and can be played on repeat without monotony.

The art takes inspiration from a distinctly old-school Persona style, adding to the mystery. It’s the achingly beautiful story of a man who wakes up remembering nothing of his past in an abandoned mansion, and also all the people who lived there before. In a series of horror tales, where people are mutilated, torn limb from limb, and pierced alive, you follow our protagonist through four past incarnations of the house’s life. It instils a subtle sense of darkness and foreboding that lasts long after the conclusion. 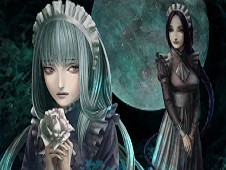 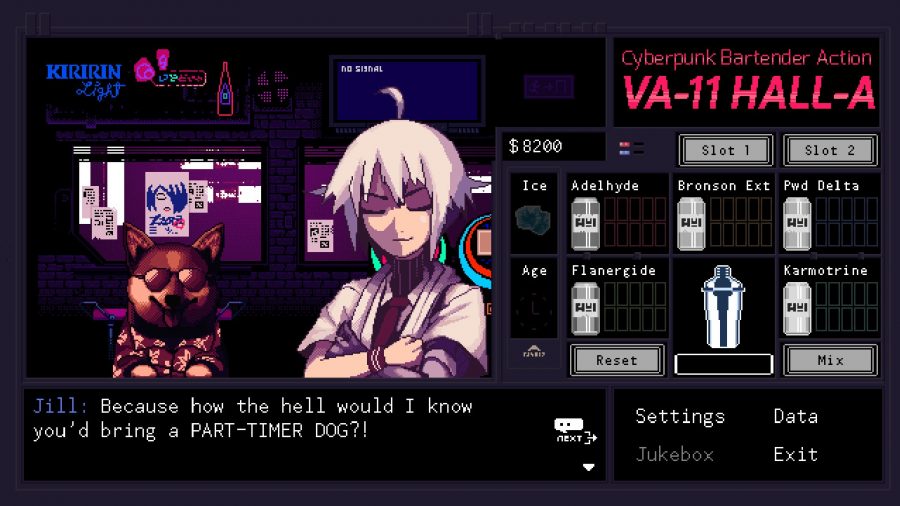 Taking place in the cyberpunk future, you play as Jill, who works in a small dive bar situated in VA-11 HALL-A. Stick to the script and mix drinks just as the recipe book details, or remember what guests describe as their favourite for each particular mood. Either way, it matters little. While you can unlock small glimpses of additional dialogue, overall the words here are king.

The music is injected diegetically via the jukebox with a playlist selected at the start of every scene, and the pixel art style is gloriously detailed and colour restricted, adding to the futuristic vibe. Jill meets a cast of barflies, from rad shibas, to robot sex workers, and a live-streamer who is never off cam, they make up the tapestry of this tome. Whether you individualise by earning tips to decorate your one-room apartment, or don’t, it’s time to mix drinks and save lives. 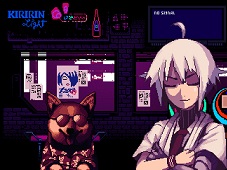 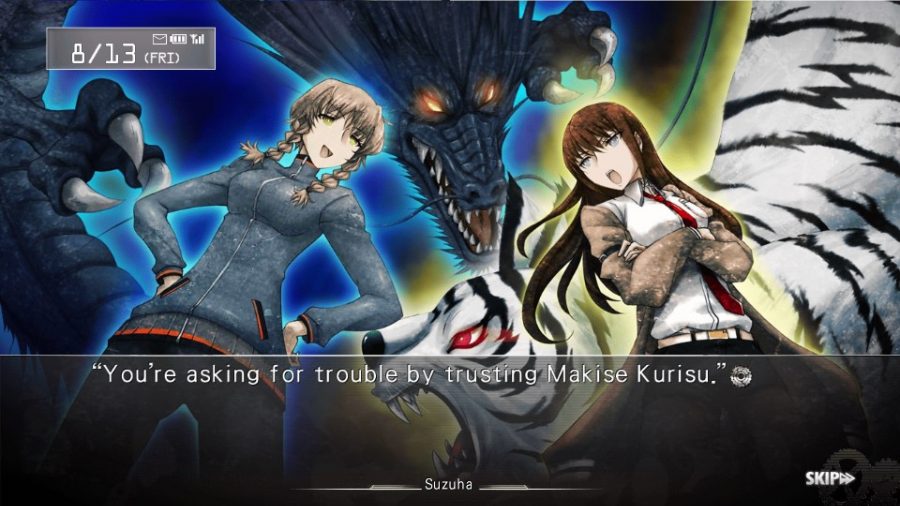 When teenage mad scientist Okabe Rintaro accidentally develops the world’s first time travel device, a phone attached to a microwave with the ability to send short texts to the past, a secret organisation descends on the Future Gadgets Lab, attempting to procure the technology. Altering his reality through flip phones, he faces the deaths of either his childhood friend Mayuri, or his true love Makise Kurisu. Yet through the strategic planning of mobile messaging perhaps you can reach a timeline far removed where both survive: the fabled Steins;Gate.

Nintendo Switch’s Elite version blends the anime of this classic visual novel, with its video game counterpart, giving new life to the tale. However, whichever one you decide to play, you should definitely play. An intricate tale of science-fiction, charming characters and twisting time loops, any fan of reading requires it in their collection. 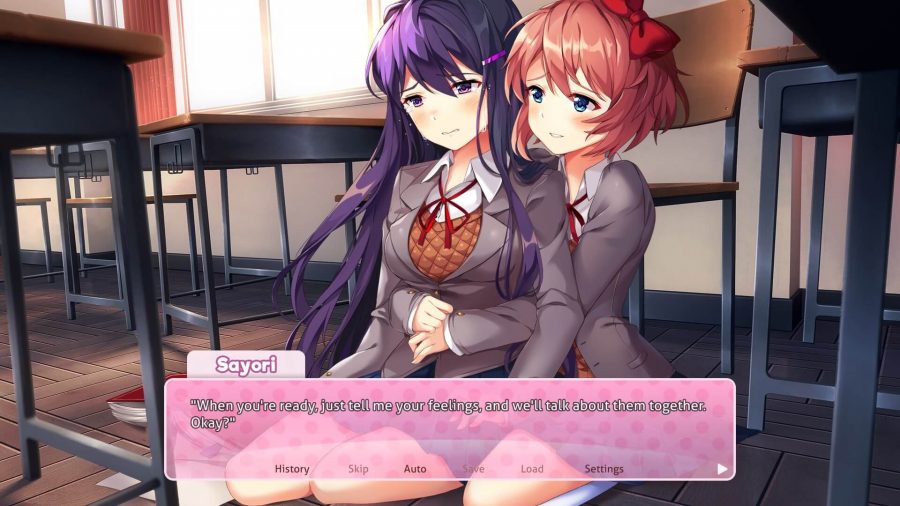 Doki Doki Literature Club Plus works by subverting your expectations, and as such, to even outline the story here would be a disservice to the player and experience. It goes deeper than your usual dating simulator, with themes such as mental health as well as the worth of fictional friendships. How you view DDLC+ is a Kafkaesque reflection of your inner self more than of what is written.

One of the lesser appreciated aspects of the game is the poems which are integral to each chapter. Each aspect is carefully planned. As you progress each girl shares with you their unique style of poetry, surprisingly thoughtful when it could have been trite. Gameplay is provided via the meta aspects of the story, which ends up being a lot, in the double-faceted meaning of that phrase. 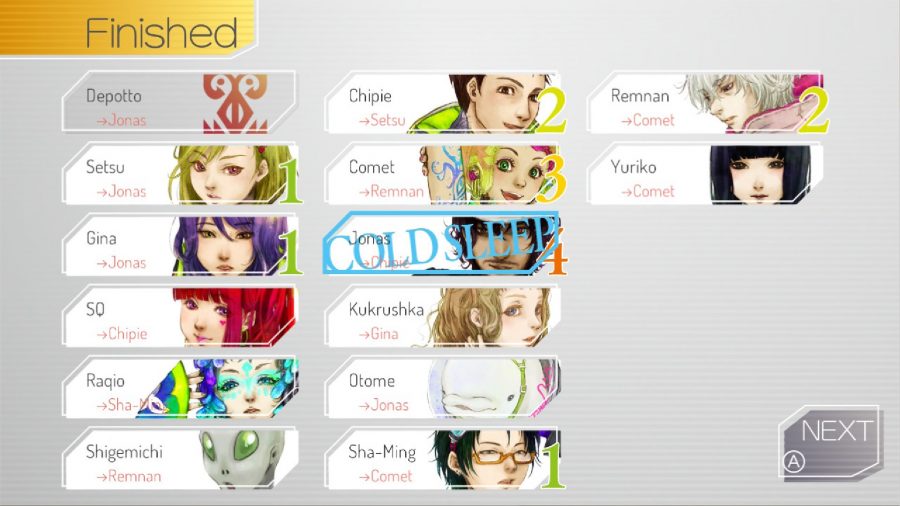 Gnosia mixes a dreamy art style, trippy lo-fi soundtrack, and gameplay which is not vastly removed from if Among Us had intelligent crewmates and a story. It leads you in gently, gradually adding in new roles as you decipher which members of the space station’s crew are overtaken by the murderous Gnosia. Speaking with the members each morning you use RPG-style stats to give you better instincts for who is playing loose with the truth.

The cycle repeats over as different people become Gnosia, and understand your multifaceted associates as they partake in different roles. Fill out your journal with the information you retrieve from groundhog day and your gathered puzzle completes. 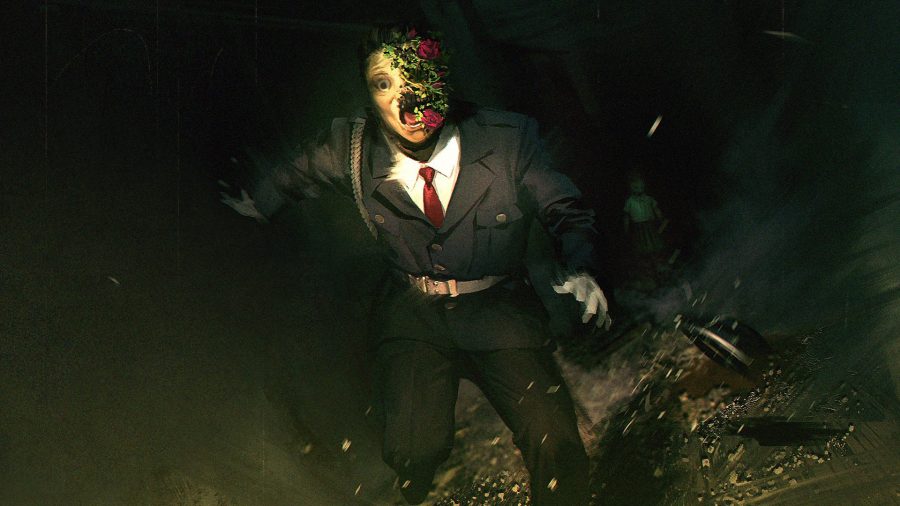 Spirit Hunter: Death Mark and its sequel NG are a deep dive into Japanese myths and fairytales respectively. In each, you play as someone investigating a series of mysteries set around a specific legend, at the heart of which is a horrifying ghoul you must placate. Be warned as the imagery which accompanies each story is actually alarming.

Explore crime scenes of these historic tragedies, search through to find clues, and later utilise the information when faced with the phantoms at each centre. Decisions can lead to life or death so tread carefully, or risk being terrified again. 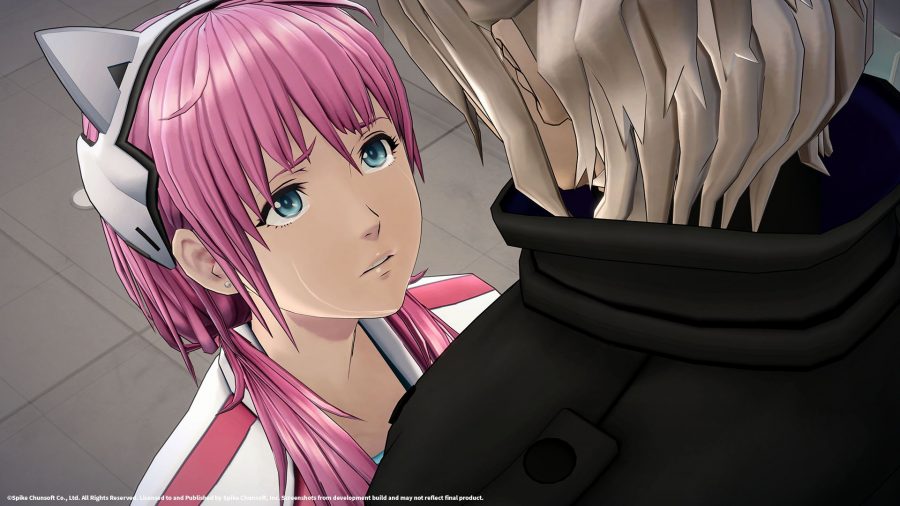 Visual novels go hand in hand with murder mysteries almost as often as they do portable consoles. Where AI: The Somnium Files is exceptional, is in developing the character. With his mechanical fake eye partner, our protagonist knows when to throw a suspect’s testimony under suspicion. You guide the path of the investigation which makes it feel as if your choices matter, though using the timeline you can jump back and view a situation from another’s perspective.

AI: The Somnium Files offers so much more than branching paths and dialogue choices, instead you enter characters’ minds, and choose your path through intricate puzzle solving. The further you go the more pieces of the puzzle that will push into place. 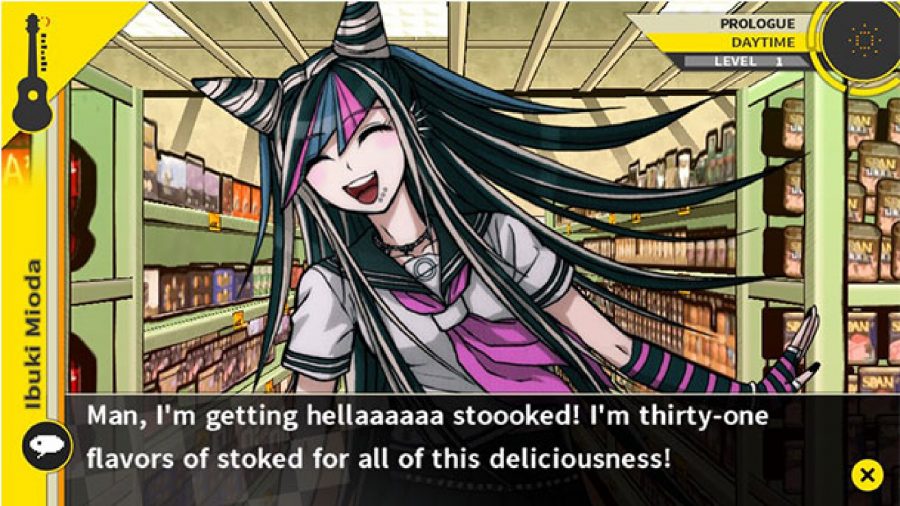 The anime ensured that the Danganronpa series became a cultural phenomenon, but the games originally for the PlayStation Portable are what set the trend. A class of fifteen students are trapped in a school and the only way out is a perfect crime. Murder your classmates and most importantly, get away with it in a peer-led trial, and walk free. With all these teens the ultimate expert in their field, it is the characters that stick with and often outsmart you.

The trials of Ace Attorney mix with a classic murder mystery novel point and click effortlessly. Where Dangonronpa excels is in surprising you. Even if you play the games chronologically, and feel that you now know all the tricks, it always delights and surprises with what remains hidden.

The Decadence Edition is available for Nintendo Switch. The individual titles Trigger Happy Havoc and Goodbye Despair are available for iOS and Android. 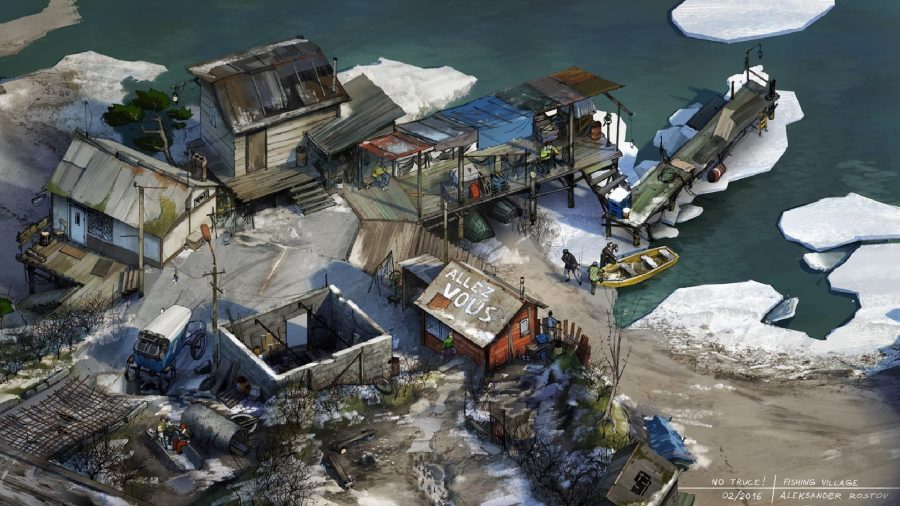 Attempting to describe Disco Elysium is madness in itself. It’s a film noir thriller, an RPG, an exploration of the psyche and a dice-rolling simulator. The one thing it very much is not though is average. Not for one moment. While the narrative sprawls endlessly through Revachol’s twisting crannies, you choose the character traits which make up our hapless protagonist.

While Disco Elysium is unimaginably vocally dense, it has so much more. Depending on how you build your character, he has the chance to charm, sneak, or brute force his way through puzzles and infinite more methods aside. Your chances are assessed on the rotation of a die. Gambling dopamine bliss. 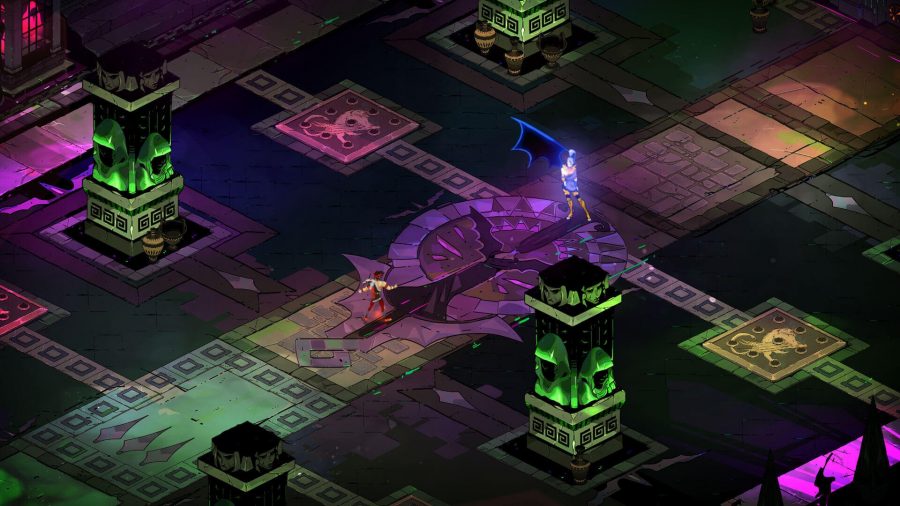 The focus of Hades is naturally on the fast-paced roguelike combat, which sees you expire over and over as you try and fight your way past your father as you flee the underworld, with just a little help from your relatives above. However, as you gift nectar and eventually the eternally rich ambrosia, the story unfurls slowly before you.

The true charm of Hades is found through the conversation. Talk to everyone from both the up above and the down below. Learning more of the mythology, unlocks special attacks and trinkets to help you through the many layers of the underworld. The story here is as rich and deep as the gameplay, and it makes you sweat to read. Take a look at our Hades review to hear more of our thoughts. 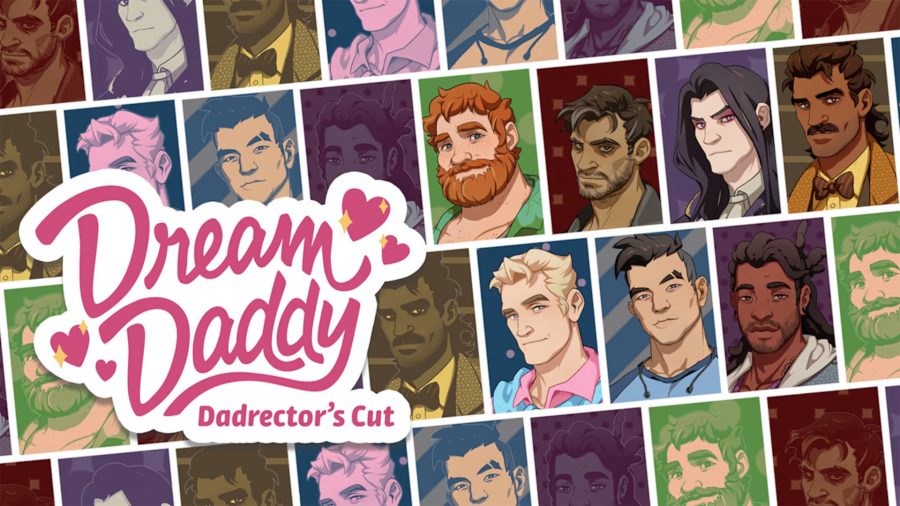 This unique game allows you to date a myriad of handsome daddies, need I say more? Well, if you need a little more info, here’s the basic premise, you must customise your appearance to reflect your true personality, choose to date one of seven potential partners, and complete mini-games.

It’s a charming little game with loads of replayability, as you’re going to want to see how the game ends depending on which dad you choose to partner up with.