The Angry Birds franchise is no joke. Developer Rovio Entertainment launched the series in 2009, and started things off with a puzzle game that most simply put, pits birds against pigs. In a bid to protect their eggs, the birds, each with their own unique skills, are carefully slingshotted into structures protected by pigs to take them down and ultimately save birdkind. Millions and millions of players have since flocked to the game to work their way through the levels and come out on top.

Unsurprisingly, the original Angry Birds spawned many, many games after it, as well as a couple of movies, a TV series, and a ton of merchandise. (Hell, I even dressed as Red from Angry Bird for a party once). If you’re looking to jump into the Angry Birds games on mobile, there are a lot to choose from. Ten in fact. Luckily, we’ve broken down what each game is about below.

Don’t forget to check out our Angry Birds download guide for all the info on how to get the games on iOS and Android. And, if you still haven’t got enough, Angry Birds aren’t only in their own games, but they’ve popped up in Minecraft too. Bombs away!

All Angry Birds games on mobile. 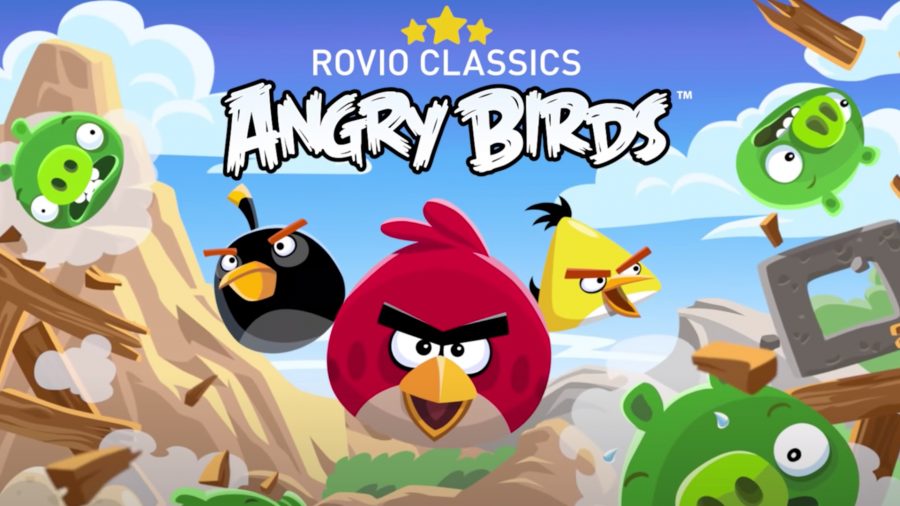 The original Angry Birds game was rebuilt from the ground up by developer, Rovio, to ensure it was playable on all the most modern mobile devices. Hence, Rovio Classics: Angry Birds. It’s everything you enjoyed from the 2012 version of the game, all powered by a whole new engine.

With a one-off charge of $0.99/£0.89, there are no in-app purchases and players can enjoy all the exact same levels and characters that they did the first time around. Or, if you’re new to the games, it’s a great place to start. 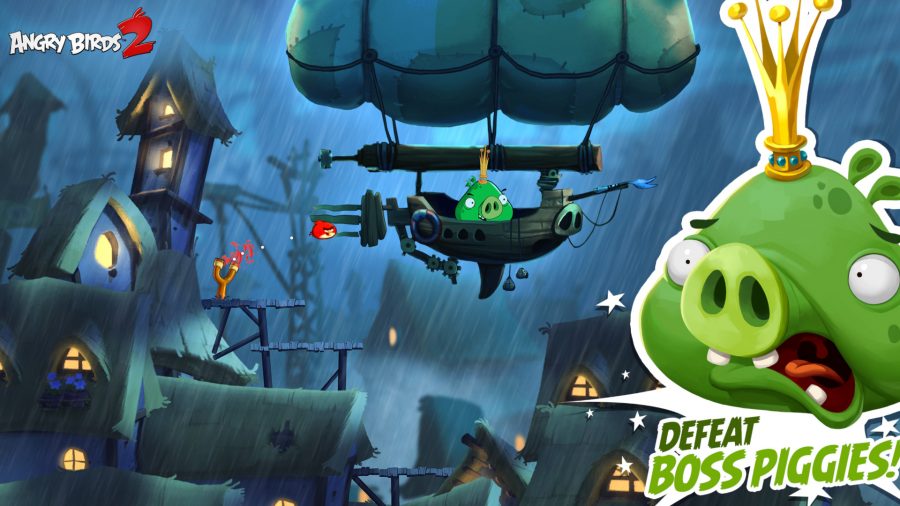 Angry Birds 2 is exactly that, a sequel to the classic game. All the most villainous pigs are back to wreak more havoc for birds everywhere and it’s your responsibility to make sure there are lots of slingshot shenanigans to take them down.

The same great graphics, multi-stage levels, and destruction is promised in Angry Birds 2. Plus, with the addition of linking up with Facebook, players can compete in the arena and take a shot at topping the global leaderboards. You can also join a clan and play with friends, or against others around the world. 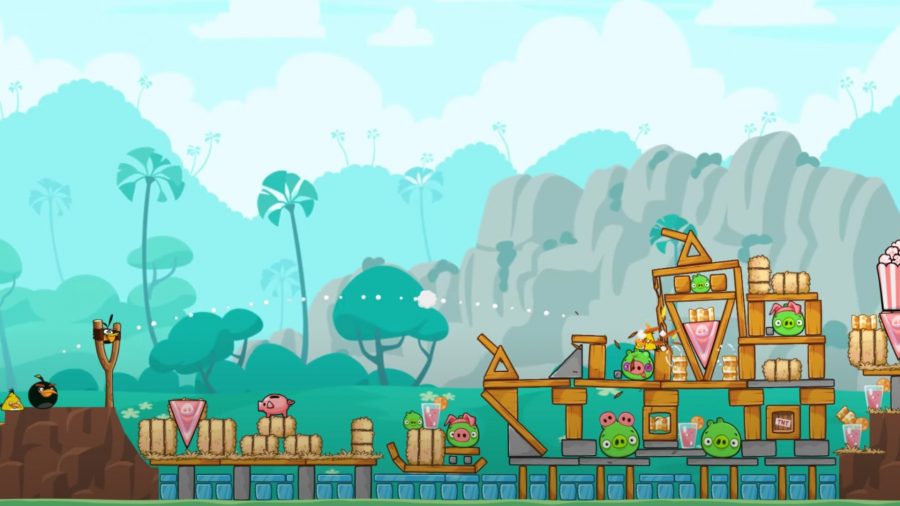 Talking of friends, Angry Birds Friends is very much focused on the competitive nature of Angry Birds. Running three new tournaments a week, meaning 24 new levels to take on, players can compete with friends and players from across the globe to try and take the top spot in the league.

Play enough and you’ll find yourself in the Diamond League. With any great mobile game comes updates and new challenges and Angry Birds Friends changes based on seasons and yearly events, which equals lots of fun themes. 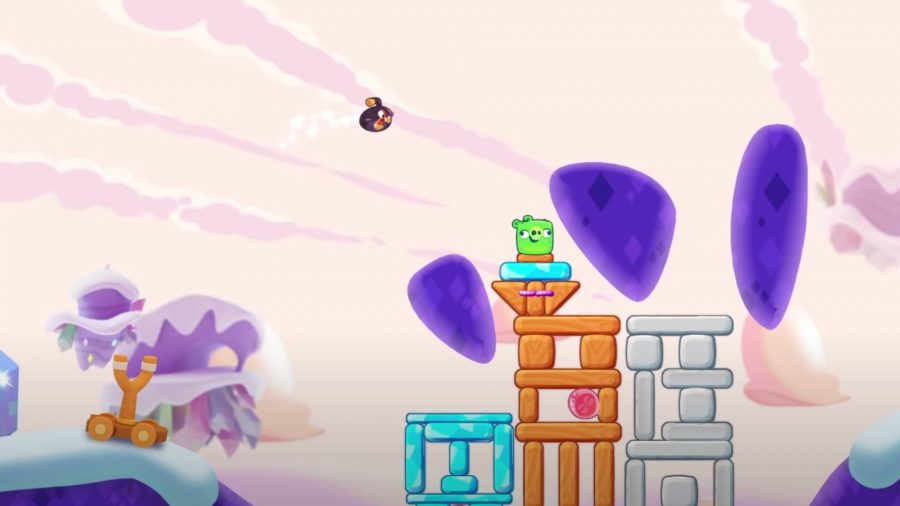 This Angry Birds game harnesses the slingshot method enjoyed by many of the other Angry Birds games in the franchise, but this time it’s about retrieving the Egg Wonders to save birdkind. You’ve got to fling birds and topple piggies, all with the overarching goal of journeying through the Angry Birds world and making sure the birds come out on top. It’s all about collecting those shiny eggs to complete the ultimate Angry Birds adventure. 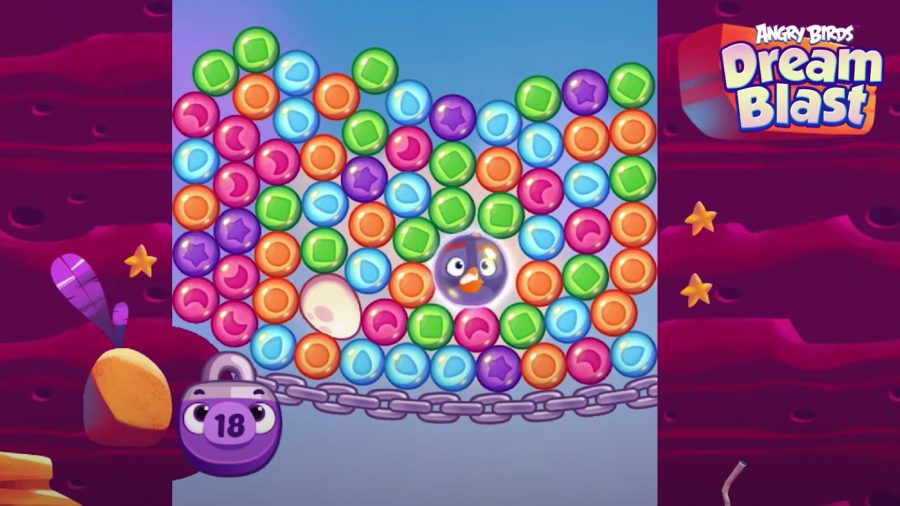 For some bubble-popping chaos, Angry Birds Dream Blast offers a unique mobile experience where you match bubbles to work your way through the levels. Gravity is not on your side though, as more bubbles join the game, falling freely, and ultimately affecting what each level looks like.

As you work your way through the levels, you unlock more of the classic Angry Birds characters with their unique set of skills which you can unleash on the bubbles. There are over 5,000 levels to work through and a lot of Angry Birds themed fun. 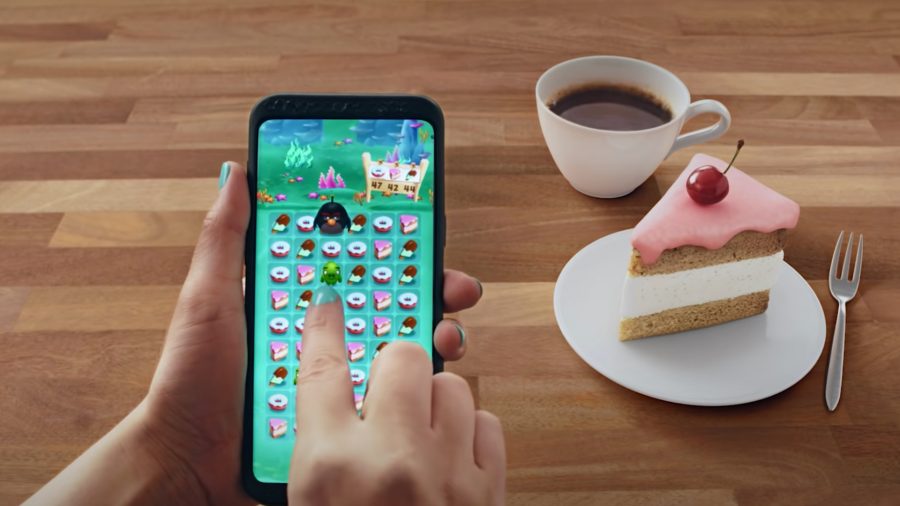 “Matching with hatchlings” is the name of the game with this one and with the incorporation of the adorable baby birds from 2016’s Angry Birds Movie, players can embark on a new type of Angry Birds format.

In Candy Crush-esque gameplay, you use the Hatchlings in match-three format unlocking outfits and scenes to decorate worlds and hold fun parties. If you match four or more items, you get some of the classic Angry Birds characters like Chuck and Bomb that can help you eliminate even more tiles in the puzzles. 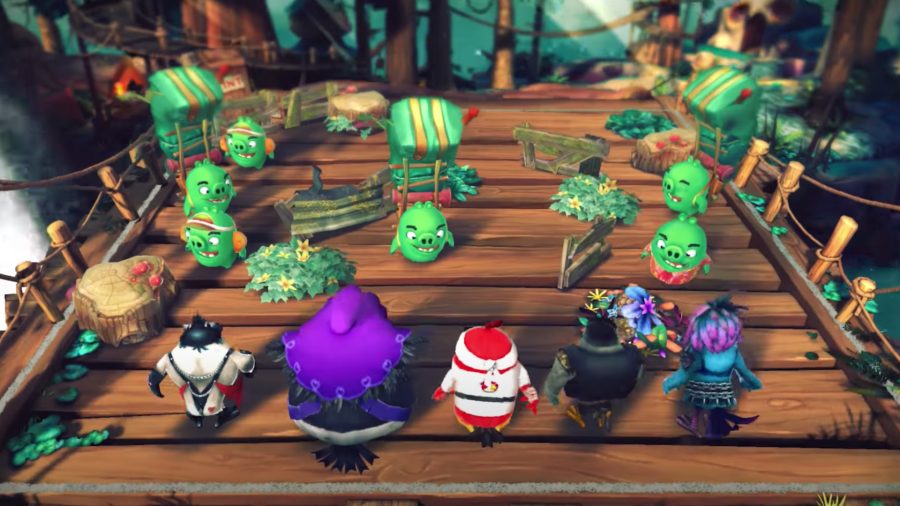 In an Angry Birds first from Rovio Entertainment, Angry Birds Evolution heads into the world of 3D RPGs with this turn-based game. Of course, the concept is still the same, save the eggs from the pigs, but this time you’re using a flock of superpowered birds to do so in some pretty spicy battles.

Hatching over 100 new characters, players form teams, take on the pigs, and evolve their birds to unleash their full potential. There are also PvP battles with other players in Pigball and weekly events to unlock super rare bids. 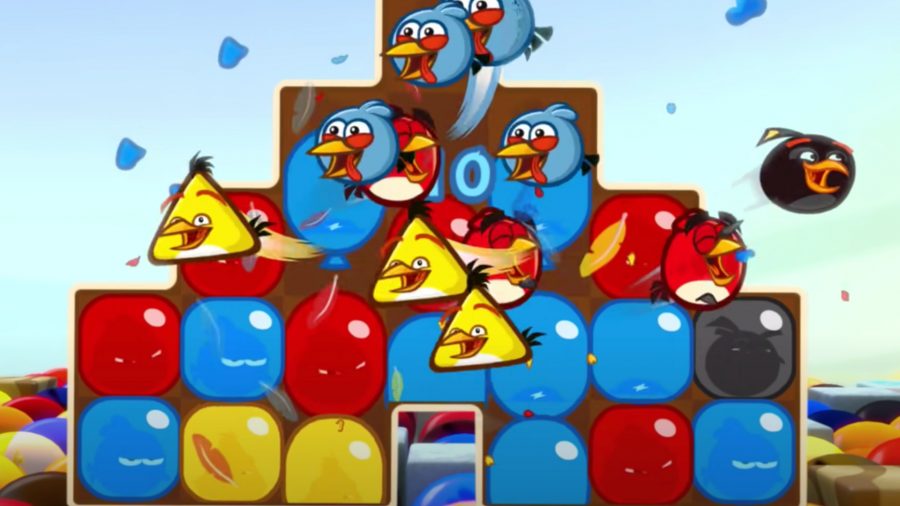 If puzzles are more your flavour, then Angry Birds Blast offers the chance to boggle your brain while tactfully popping matching balloon tiles and unleashing birds mayhem.

The pigs have trapped the birds, but it doesn’t mean you can’t blast them out by making matches that will hopefully obliterate their surroundings and free the birds to fight another day. There’s also a bunch of boosters like laser guns, bombs, and rockets, to really add the blast into Angry Birds Blast. 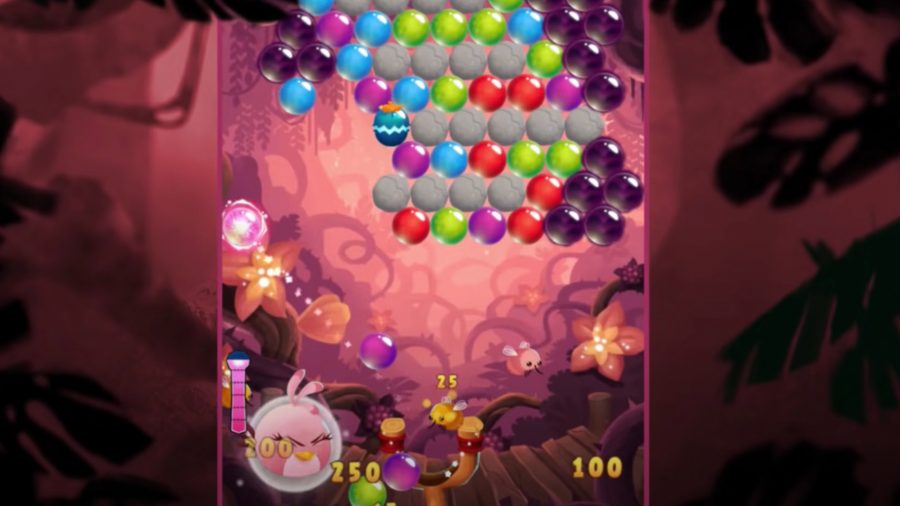 The slingshot is back in Angry Birds POP! But this time, you’re aiming at a collection of bubbles that need popping and not structures to break down.

Match and pop the bubbles to release the hatchlings, defeat the pigs, and score big in this addictive puzzler from Rovio. With over 4,000 levels, this bubble shooting adventure boasts downloads from over 45 million players. So, if you’re in the market for a puzzler, Angry Birds POP! is a great pick. 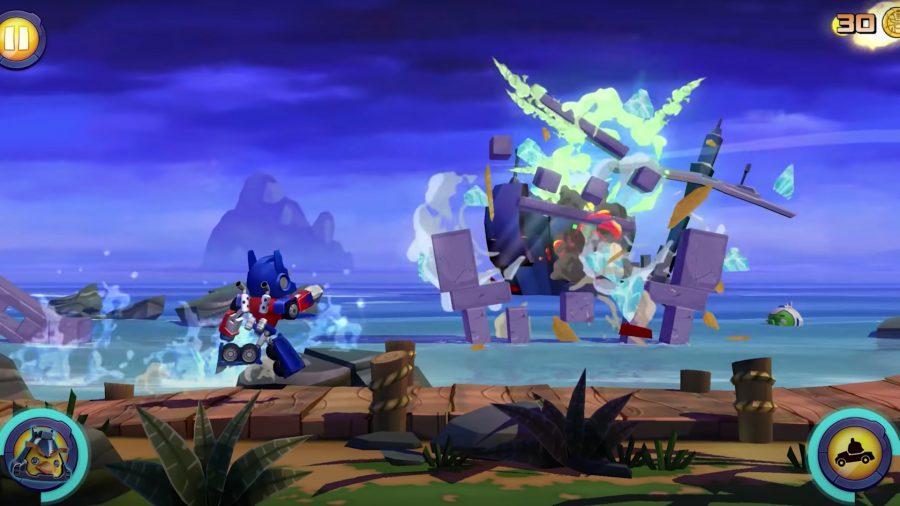 Last but by no means least, Angry Birds Transformers. In a collaboration with the transforming robots, Rovio introduces players to this run and gun action-adventure game with the Autobirds and Decepithogs.

Angry Birds icon Red turns into Optimus Prime and Chuck as Bumblebee, along with a whole lot more. It’s definitely the biggest change to the usual Angry Birds game format, but if you fancy running around, shooting ‘em up, then this one’s for you.

That’s it for our guide to all the Angry Birds games on mobile. For more games like this, take a look at our list of the best mobile platformers on iOS and Android.