If you want to be the ultimate sword smoocher in Boyfriend Dungeon, you’ll need to find yourself some bae blades. The game has a bunch of cuties for you to date, flirt with, or simply befriend. Here’s a list of all the current bae blades, their skills, and – most importantly – where to find them. Kitfox has confirmed that two new baes are coming – Jonah (who you already meet at the July 4th barbecue), and Leah, the second romanceable female bae. We will update this guide when they are released, so be sure to check back.

It’s hard to say whether certain skills for Boyfriend Dungeon characters are definitively better than others, as it depends on your playstyle. When they reach a new level, they will get a new skill, and every other skill has two options. Read the descriptions, have a play around with the choices, and see what you prefer. You can change skills at any time by visiting the Cutting Edge Gym on the map. You can also check each character’s combos by going to the weapons tab on your in-game phone.

Now, let’s meet all of the Boyfriend Dungeon characters. 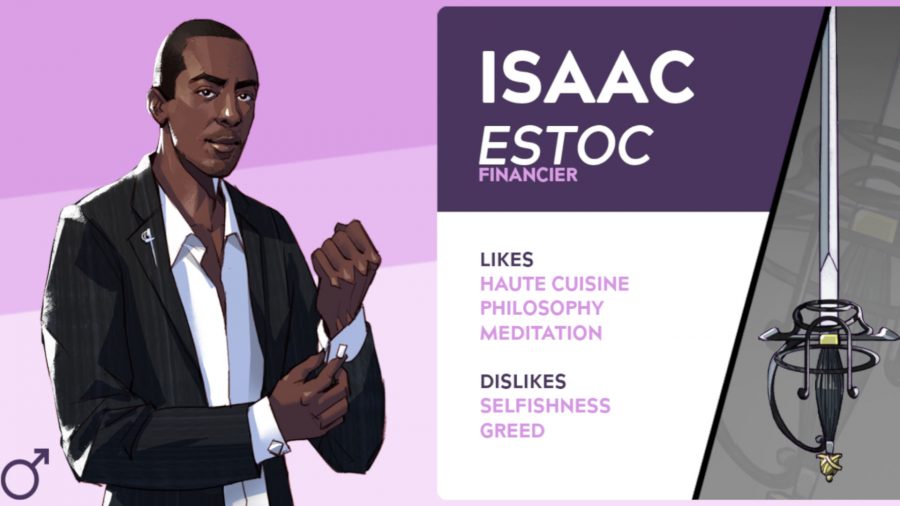 Isaac is a well-mannered, smooth-talking rich boy, who wants to use his money to make a difference in the world. He owns a company, and is a talented fencer, who takes you under his wing. He has some conflict with his hostile and disapproving father, though, and may need a little help from you to face his own fears.

When he transforms, he becomes the estoc, which is a quick, short-ranged fencing sword. He has a handy parry ability that allows you to reflect dodges with a well-placed dodge, which makes him extremely useful in the hands of a skilled sword smoocher.

As the first bae blade you meet, Isaac can be found on the first floor of Verona Mall dunj, after being sent there by your cousin Jesse.

What are Isaac’s Skills? 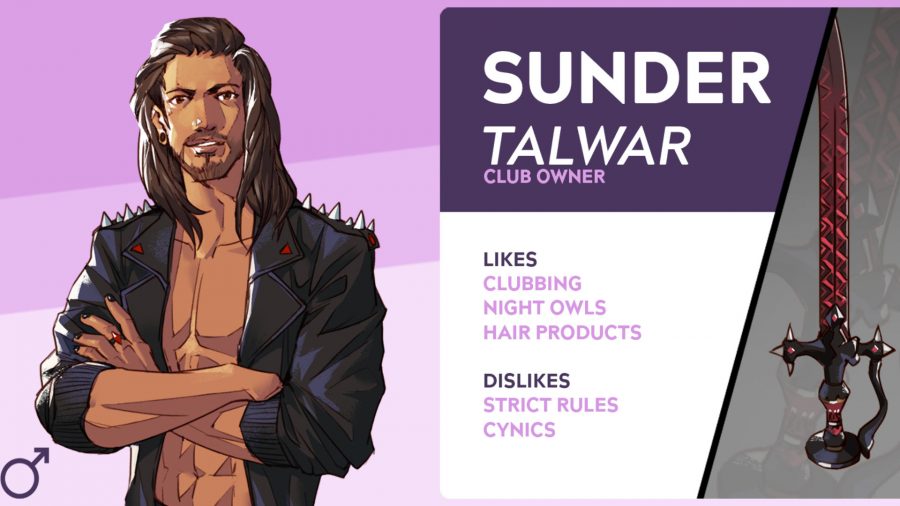 Sunder is a bad boy who co-owns the La Rosa nightclub. He has a passion for dancing and living life to its fullest, he also has a dark secret. He’s a bit hardheaded, and can sometimes come across as arrogant and unfaithful, but his flirtatious comments are enough to make a grown man blush.

His weapon form can be a little slow, but with its bleed and stun effects, it has some brilliant crowd control capabilities.

You find him on the second floor of the Verona Mall dunj, in a vault. He quickly invites you to meet up with him and go dancing at his club.

What are Sunder’s Skills? 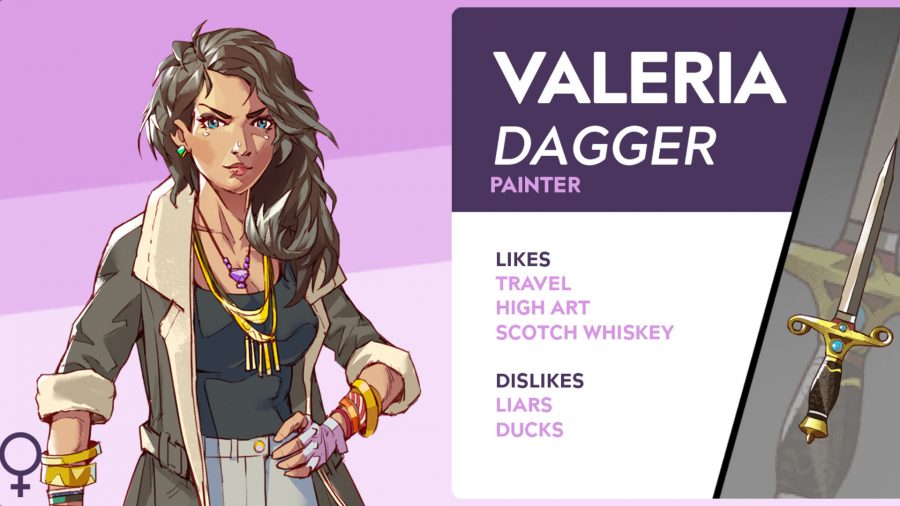 Valeria is currently the only female bae you can date, and she certainly is a fiery one. She’s very defensive at first, hinting to previous damage, but is a fun and sassy companion when she warms to you. She’s a talented artist with a checkered past and her own share of secrets, including a mysterious chap who appears whenever you are out on a date. Can you earn her trust and find out what she’s hiding beneath that sharp-edged tongue?

In her blade form, she becomes a dagger. She’s extremely fast, but has a very short range. This is made up for by her dodge, which confuses nearby enemies, making her comparable to a rogue or thief in other games.

You can find her on the third level of the Verona Mall dunj.

What are Valeria’s Skills? 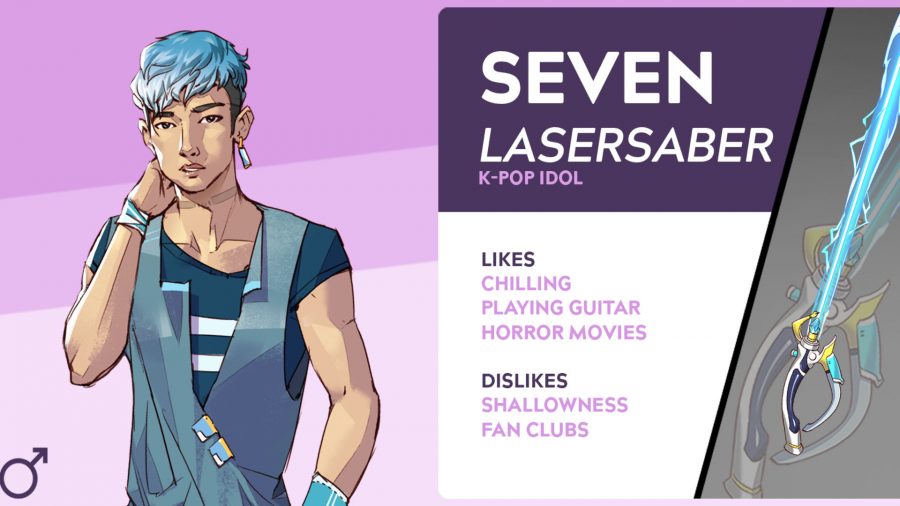 Seven is a member of the popular Korean band, Blade Generation. Being a superstar isn’t exactly his idea of fun though – he’s quite reclusive, and has been in a deep depression due to the stresses of his work. He takes a little while to warm to you, but is grateful for your much-needed friendship. He loves horror movies, videogames, and playing the guitar.

In his sword form, he’s a powerful ally. He’s fast, and his upgraded electric arc has great AOE potential. In fact, he’s arguably one of the strongest weapons in the game, and the easiest to get a grip on.

At one point you will be posed with an option to choose whether Seven should go solo or duo (it will make sense when you get there, we don’t want to spoil it for you!). Don’t worry, whichever one you pick will make him happy, as long as he’s got your support – it will just alter the dialogue you share with him towards the end of his story.

He can be found on the ninth level of the Verona Mall dunj, behind a locked gate. You acquire the key for this gate by killing the second ‘fear of change’ boss.

What are Seven’s Skills? 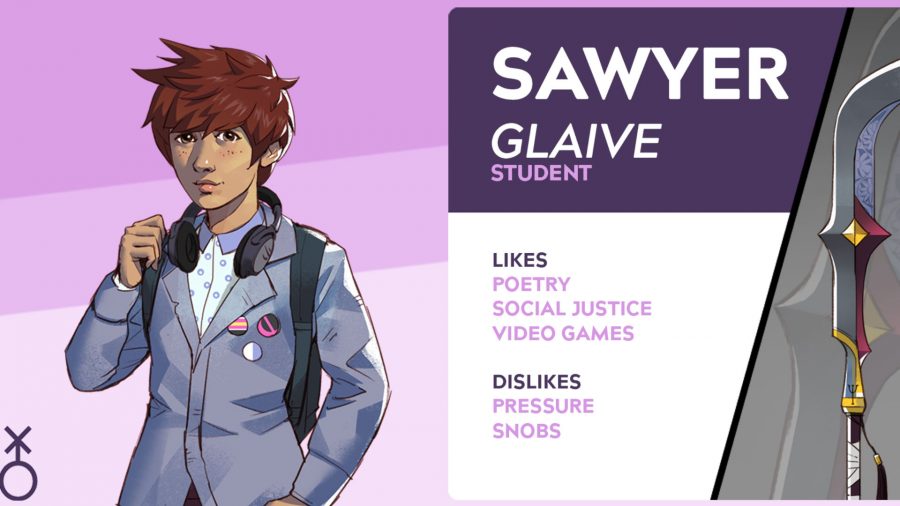 Sawyer is a sweet, non-binary cinnamon roll who must be protected! When they aren’t in their weapon form, they live out their life as a 20-year-old college student who is a hopeless cook… And a hopeless romantic.

In their weapon form, they transform into a glaive. The glaive is slow, but the wide sweep and ranged throw make them a great choice in a game that lacks ranged options (you are the sword smoocher, not the gun smoocher, after all). This makes Sawyer a great choice against some of the tougher enemies in La Rosa, if you can get the swing of their throws.

You can find them on level 12 of the Verona Mall dunj, after you kill the final ‘fear of change’ boss. They’re in the hallway between the boss room and the exit.

What are Sawyer’s Skills? 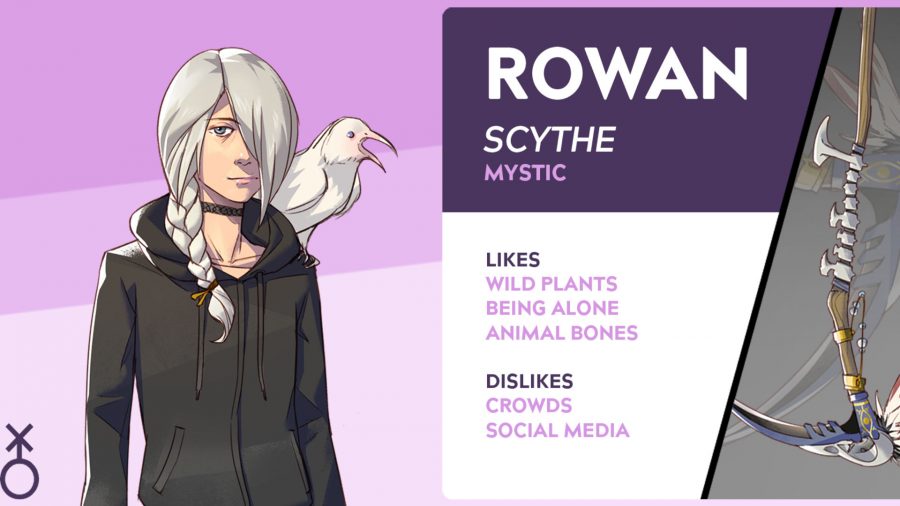 Rowan is the second non-binary character you meet, and they were designed by the creator of Haotoful Boyfriend. Of course, this means they are always accompanied by their avian friend, Crowley. They are a dark, mystical witch suffering a great loss, and in severe need of some emotional support. They are affectionate, if not a little awkward, and quickly see you as a potential soulmate.

In their weapon form, Rowan naturally becomes a scythe. The scythe has a slow but wide arc, with a really useful gravity well ability that can suck enemies in and damage them. Their dodge makes you phase out of existence, making you momentarily invulnerable. They can be a bit tricky to master, but they make up for it with some great combos and damage.

Rowan is easily the toughest bae to snag. You can find them by heading to the mansion at the top of the map any time after Jesse’s 4th of July barbeque. The next day, they will send you a slip with a riddle on it, and you will get a prompt to solve it – don’t worry, the first time none of the answers will be correct. The following day, you inspect it again, and your dialogue options suggest it’s a phone number, and you’re given the opportunity to punch in the numbers you think are right (2-0-7 worked for me, but I am pretty sure I decoded it wrong, so it’s likely that more than one answer will be accepted). After this, they will invite you back to their mansion.

What are Rowan’s Skills? 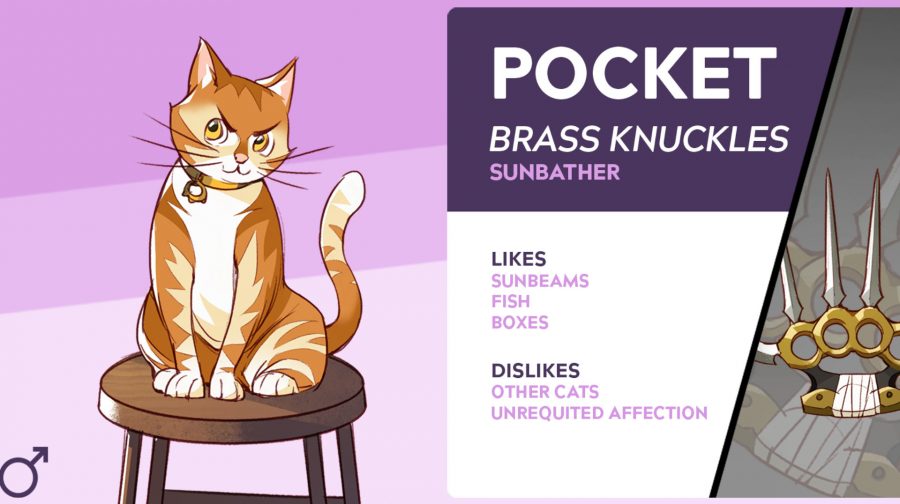 Pocket is a mischievous cat, who likes to roam the streets of Verona Beach causing trouble. On your phone, your main communication with him will be through their owner, Tank. Pocket will have you running all over town, chasing them around art galleries to restaurants, as he hunts down snacks and picks fights with other street cats.

As a weapon, Pocket is a pair of brass knuckles, equipped with some razor sharp claws. They are very quick, and what they lack in distance they make up for with fast leaping attacks. They’re great for getting behind enemies, and dodging around lasers and enemy AoEs.

You find Pocket on level two of the La Rosa dunj, then receive a text from his owner shortly after.

What are Pocket’s Skills?

You can also see a cameo from actor Vitas Varnas, who runs the hidden shops in the two dungeons. During a run of the La Rosa dungeon, I stopped at a park with Knuckles, and Vitas came and offered me a deal on two pieces of fabric. He’s listed as being able to transform into a staff, but it doesn’t look like you can date him… Yet, at least.

Boyfriend Dungeon – Can You Date Everyone?

Short answer – yes! Well, except Eric, but you really wouldn’t want to after you get to know him. Oh, and Pocket, because… Come on. He’s a cat. You can ‘go on dates’ with him, though – which mostly boil down to smuggling him snacks and giving him head pats. The bae’s are quite happy with your polyamory, and even mention it in their texts. This gives you the opportunity to explore all of the character storylines without having to start multiple save files or angering any of your faves, which is a massive bonus. A different bae for each day!

So that’s it – everything you need to know about the bae blades, their locations, and their skills. If you are a fan of Boyfriend Dungeon or dating sims in general, we recommend you check out our Mystic Messenger emails guide or our Tears of Themis cards guide to snag yourself some more cuties.