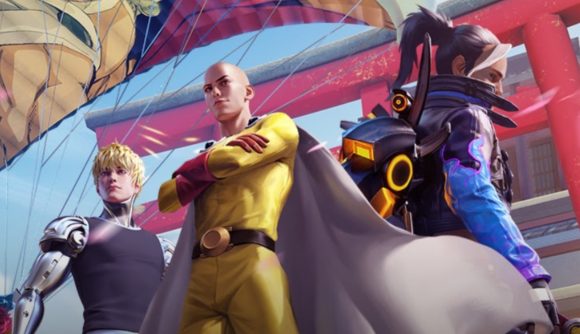 Garena Free Fire’s first event of 2021, known as ‘The Hero Trial’, is set to feature the all-powerful One-Punch Man. Legendary heroes Saitama and Genos will make their grand Garena Free Fire debuts alongside a nice variety of themed fashion items inspired by the One-Punch Man series, including reskins and costumes, as well as a special event interface.

The whole thing is expected to kick off on January 10 with the introduction of some fresh event content, followed by a full takeover of the main interface on January 15 that will exhibit “iconic One-Punch Man elements.”

Once you’re in a match, you’re sure to find some neat easter eggs dotted around spawn island and noticeable reskins of the airship and airdrops. Then there are the collectable cosmetic items, which include Saitama and Genos character skins, backpack and gloo wall skins, and a special ‘I’m Saitama’ emote. Beyond that, you’ll also have access to two new weapon skins: the Megapunch M1887 and M4A1.

Starting January 15, Saitama will hold a series of training sessions where you’ll be able to earn event rewards. Each session tasks you with taking down some tricky monsters bearing treasure boxes. The higher the box’s rarity, the better the items inside. In order to access these sessions, you’ll first have to acquire One-Punch Man tickets by completing daily missions and scavenging in-game drops.

This will be followed by the game’s ‘Path to Hero’ web event, which is set to run from January 16 to 26. Once again, you’ll be hunting some foul monsters to earn treasure boxes containing tokens that can then be exchanged for rewards in the redemption store. In terms of other rewards, signing in on January 23 will get you a free Saitama surfboard skin.