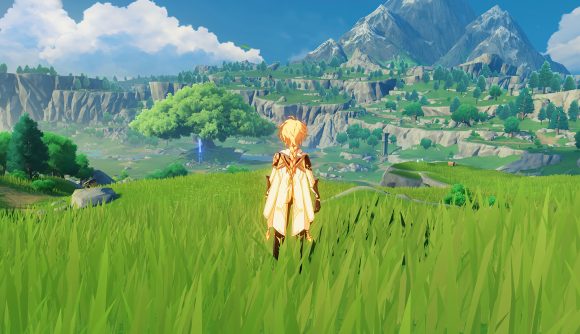 It’s safe to say that Genshin Impact has taken the gaming world by storm. Early trailers were dismissed as being too similar to Legend of Zelda: Breath of the Wild (like that’s a bad thing), but players immediately warmed to the open-world RPG. We said in our Genshin Impact review that it was “a joy to explore,” and to be honest, we’re still exploring now.

It has recently become evident that lots of players are exploring the world of Teyvat, and have joined in with the community aspects of the game, as well. As such, Genshin Impact recently overtook Minecraft as the largest Discord server on the platform. Its server currently sits at 733,911 members – comfortably ahead of Fortnite’s 620,399 and Minecraft’s 647,619 – but unfortunately that isn’t due to increase any time soon.

The Discord server has reached the upper limit for the number of members – something that we’ve never seen before, and didn’t even know existed. So, if you’re trying to join the fun, you might have to wait a little while. However, for those of you who are lucky enough to already be inside, developer miHoYo is running a huge giveaway in celebration.

The lucky winner will be rewarded with an iPhone 12 Pro Max and 5,000 runners up will get their mits on a Blessing of the Welkin Moon. A further 50,000 people will get 50 Primogems, which is better than nothing I guess, but only just. 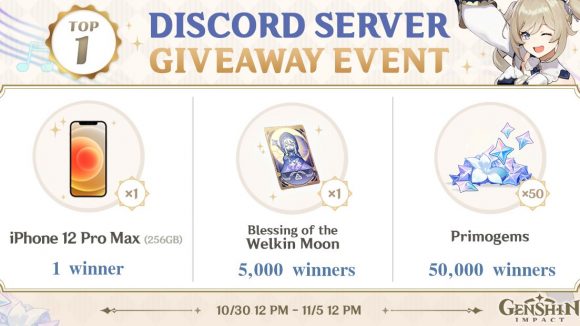 Full details of how to enter are in the Discord server, so head there to check it out. Unfortunately, we didn’t manage to get in before it maxed out, so we don’t know whether there’s a complicated sign-up process, one-click entry, or some other kind of ritual you must complete in order to be in with a chance.

However, if you’re unable to access the Discord at the moment, then don’t worry. We have a Genshin Impact codes list where we round up all the free goodies and giveaways that are currently available in-game.