It’s already past its one-year anniversary on PC, and has been through significant changes, but Gwent is finally here on mobile  – even on Android! It’s such a timely and refreshing deck builder and, sure, it’s a beloved IP and has an incredible amount of visual style and polish. Whether that’s the resounding audio effects, detailed orchestral scoring, or the flashy premium card animations.

Gwent is a powerhouse because, in its innermost guts, the game’s structure is radically different from most others of its king. It isn’t a battle, but rather a power struggle between two players to keep a higher total across three rounds. Card advantage is incredibly important, but the drawing, hand management mechanics, and card effects almost entirely negate that randomness. Gwent offers a massive card pool with tantalising synergies across the various factions.

In this Gwent guide we’ll be covering basic play, deck building strategies, its currency system, and, lastly, some practices to outmanoeuvre the game’s monetisation. So, if you were hoping to play entirely for free, we might just be able to help you with that.

everything in our Gwent guide:

gwent game: How to play GWENT

A game of Gwent is a best-of-three rounds. The active player plays one card from their hand per turn and resolves its effect, then passes play to their opponent. Most cards are units which add their power to its owner’s total. To win a round, simply have the greatest power total when your opponent passes voluntarily, or runs out of cards. To liven things up, Gwent’s draw structure is rather unique: 10 cards for each player to start, then three additional draws at the start of the second and third rounds. There are mulligans for each round, so decks are very consistent. 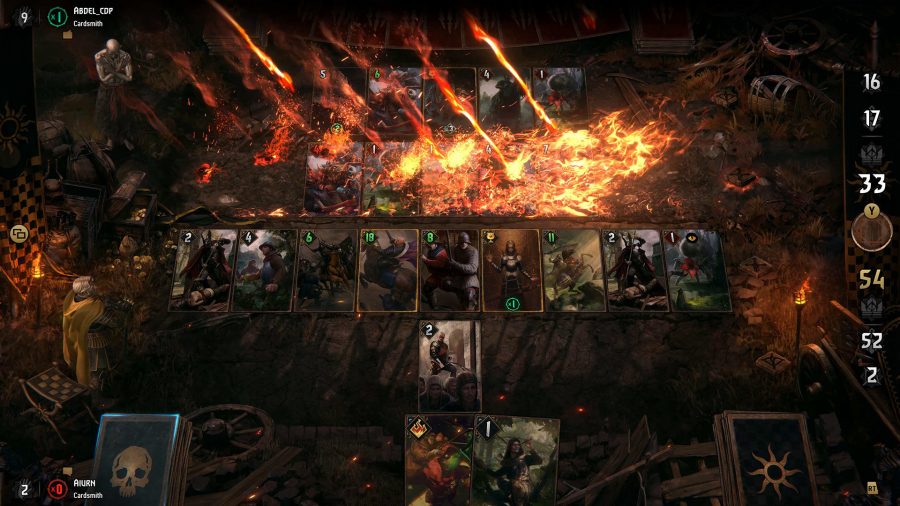 gwent barrels: How do rewards work?

Every match won gives ore which can be used to buy card barrels. Each level gives reward keys, which are used in the reward book to unlock skins and oodles of in-game currency. In the beginning, the game treats you to a sweet honeymoon phase, showering you with keys that jump-start whichever dream deck you’re aiming for. The biggest one is hitting level 60, thereafter barrels will always contain an extra rare. This is just one of many ways Gwent rewards experience over expense.

gwent factions: Who can you play as?

Each faction has an exclusive pool of cards and leader abilities, as well as a few key mechanics that cement their unique identity. The Northern Realms are all about a generalist approach, with equal options for buffing friendlies and debuffing the opposition, with some utility thrown in. The Scoia’Tael are the non-human sentients, representing the mystical races like elves and dwarves along with some more exotic denizens.

They have special bonuses for diverse unit sub-types and a heavy reliance on their unique trap cards, setting up giant reactions to enemy moves. Skellige are the shamanic and death-based faction, with plenty of self-sacrifice and graveyard interactions. Monsters are dynamic, swelling their ranks and devouring each other. They have the biggest creatures and the largest swarms.

Every Wednesday is Gwentsday and has bonus experience for every match. The game is always doing timed promotions like this, either for different factions or to promote a new set or season start. Basically just either follow Gwent on Facebook or Twitter, or simply peruse the landing page in-game for a notice about any time-sensitive bonuses.

gwent arena: How does it work?

The arena is Gwent’s draft format wherein you build a deck by selecting cards one at a time from a batch of offerings. The resulting deck, which is assembled without respect to provision costs, is used until you lose three matches or win nine. At the end of the run, you get a payout depending on how well you did. The cost of entry is a little higher than the price of a keg, but a keg is also part of the guaranteed reward bundle for participating, so the Arena is worthwhile if you like the creativity and flexibility required by the draft format. 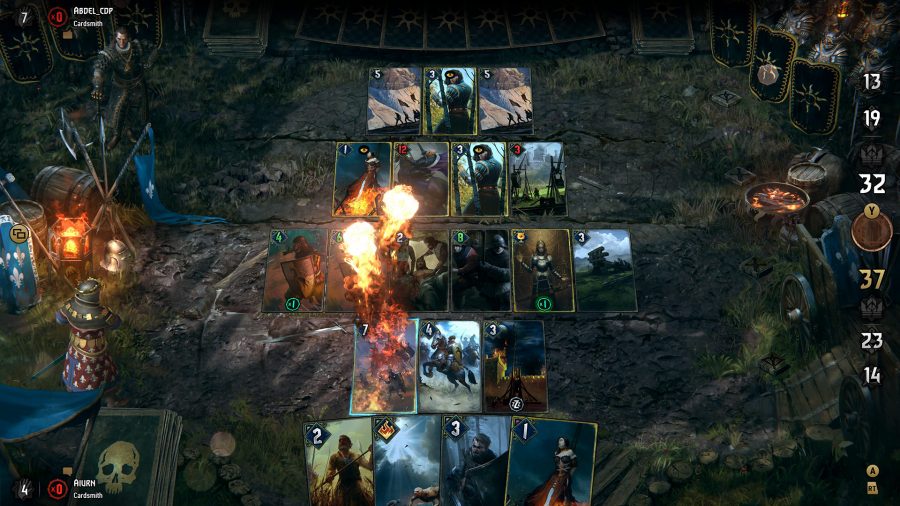 gwent download: how to get gwent on android and ios

Gwent is available as a free-to-play game on iOS and Android.

First, consider your starting faction and leader ability. These should be selected based on the cards already unlocked and personal playstyle preferences. Each deck must have at least 25 cards, 23 units, and be under the provision limit. Stronger or more distinctive cards have higher provision costs, as displayed on the bottom right.

The deck editor has robust filters for sorting the cards you want. Use the search function to hone in on specific keywords and synergies you want, and craft a few clutch additions, and you’ll have a custom deck in no time.

gwent cosmetics: how to get them

There are leader skins, which alter your commander’s outfit and appearance. Premium card versions display a short looping animation, which really makes the cards pop and come alive. Player avatar icons are unlocked, either through the reward book or else exclusively through achievements. There are also avatar borders, card backs, and battleground skins as well. Please note that most, if not all, of these are unlocked through consistent play and doled out as rewards for highly specific achievements. Animated cards are premium and can be purchased at-will, but the more prestigious cosmetics simply depend on long-term investment, though a few glamorous ones are also sold directly for pure cash.

gwent seasons: How do seasons work in Gwent?

Each month has its own special format with a unique twist on the default rules. These seasons also have their own unique rewards and title unlocks, so going deep is much better than splitting your time evenly throughout the year. The rule shifts in this optional formal create a side meta which is never the same twice. 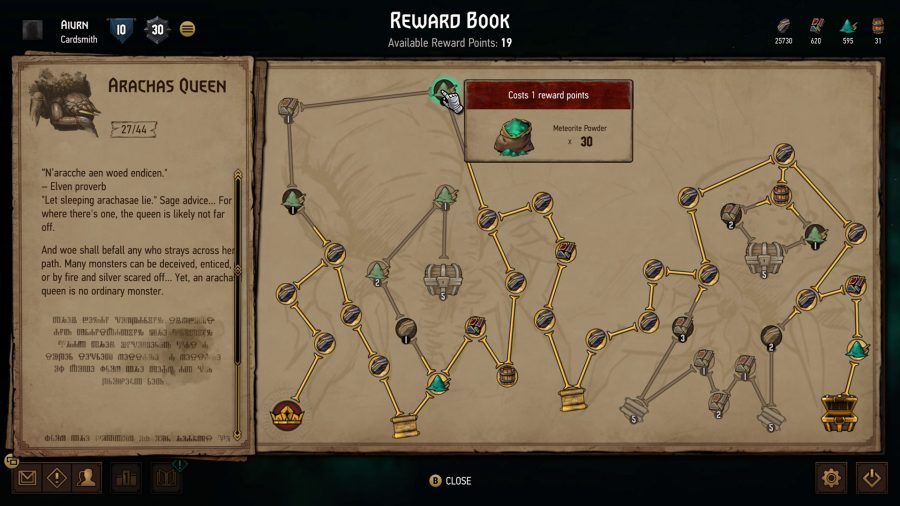 gwent free: How can I play for free?

Login and do your daily quests. Also, plot a direct course between your existing collection and the next card or two you want. This means researching deck archetypes and making a budget to streamline the path between your current setup and the next best thing. Have a decent deck for each of the factions, but be as specific and focused as possible.

For the most bang for your buck, simply imitate the leaders or a specific synergy. Invest in some high quality neutral cards, who are all conditionally strong and can be slotted into a variety of decks.

gwent card games: How gwent is different to other games

Theme, progression, and gameplay. For any Reiner Knizia fans out there, Gwent owes a good bit of its heart to Blue Moon. Even though a single match of Gwent doesn’t take more turns than Hearthstone, it feels so much more tense because of the structure. Every single card matters immensely. Card advantage is king, and efficiency is the dominant paradigm. Matches can often come down to a single decision.

Progression is generous, with the game offering in-game currency for daily logins, played matches, level-ups, and achievements. It has more systems in place to unlock cards for free than almost any other game out there, except for perhaps Eternal. Lastly, for anyone with a bit of familiarity with the Witcher books or games, this game is full of flavor text and allusions. All of the major characters are cards and have been well-translated into the game.

Thronebreaker is Gwent’s standalone single-player expansion. It has matches spanning a pretty long campaign with cel-shaded graphics, excellent voice acting, as well as an original storyline with some choose-your-own adventure style flavor. It came out a while back and is a premium companion game to Gwent, though it serves as a robust introduction. It’s now available on mobile, also – be sure to see our Thronebreaker review! 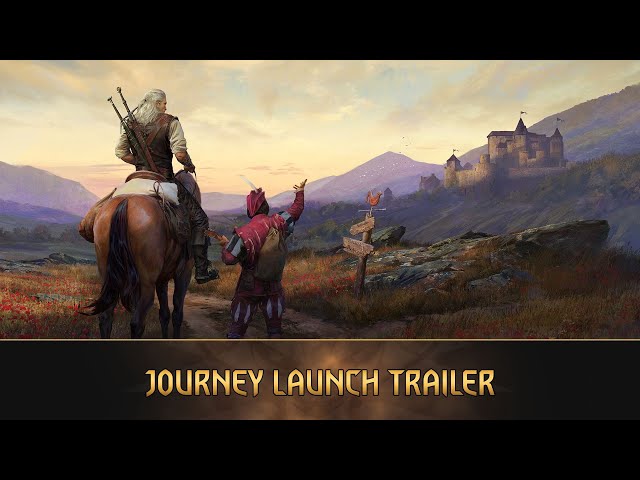 gwent journey: How does Journey work?

Journey is, effectively, Gwent’s version of a traditional battle pass. It provides you with 100 levels of rewards across two different tiers: standard (free) and premium. A season lasts three months and you progress by playing and winning matches in any of Gwent’s competitive modes.

Rewards include player avatars, reward points, card kegs, leader skins, and ornaments. During the first season of Journey, Geralt was a available as a premium legendary leader skin, and you can customise him by unlocking new weapons, armour, trophies, and accessories by progressing throughout a season of Gwent.

Not only that, but there’s also a weekly story that unfolds week-by-week. It involves Geralt and his pal Dandelion going off on adventures, and you can participate in quests to further boost your progression throughout Journey.

And that’s everything from our Gwent guide. If you want more similar recommendations, be sure to check out our list of the best mobile card games!