In any playthrough of Immortals Fenyx Rising, crafting potions is vitally important. There are some bosses and monsters that are incredibly difficult to defeat without a couple of heals and buffs on hand to increase your stats or refill that health bar.

Much like you wouldn’t go to the gym without a protein shake or attend a yoga class without a smoothie, potions and consumable items are a mainstay of the RPG genre. Admittedly, as we noted in our Immortals Fenyx Rising Switch review, this RPG is on the easier side of the difficulty scale, but there are still some tough fights – especially if you have your difficulty settings ramped up.

Skyrim is famous for letting you effectively stop time mid-battle in order to eat fifteen apples, nine sweet rolls, and two wheels of cheese in order to heal your wounds, but that’s not quite how things work here. It’s nothing too complicated, but some factors are glossed over in the tutorials, so we’re here to explain how to craft potions, where to find ingredients, and how to use them in your time of need.

Everything you need to know about crafting in Immortals Fenyx Rising: 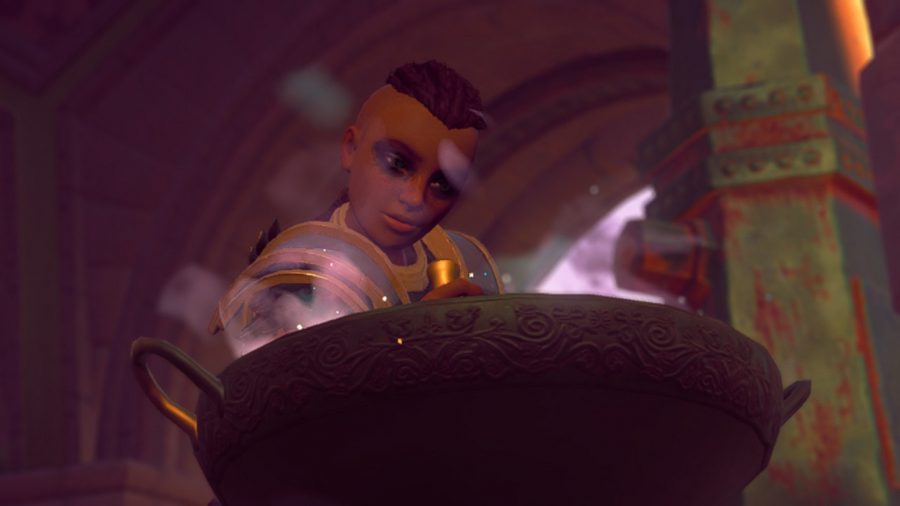 Where to find ingredients

There are four main ingredients: Pomegranates, Blue Mushrooms, Olympian Figs, and Flower Nectar. You can find these in specific areas of the Golden Isles, and they grant you bonuses when you eat them.

Pomegranates grant you health, and are located high in trees. You’ll need to shoot them so they drop to the ground where you can pick them up. You can also find Pomegranates laid at the feet of statues as offerings – feel free to pick these up and eat them.

Press left on the D-pad to eat a Pomegranate, which replenishes one health chunk.

Blue Mushrooms restore stamina, and are typically found on cliffs, in rocky areas, or near caves.

Press right on the D-pad to eat a Blue Mushroom, which replenishes 50% of a stamina chunk.

Olympian Figs don’t have any use other than for crafting Attack Potions. You’ll find them near houses and temples.

Flower Nectar has no use other than for crafting Defence Potions. It can be found near water. 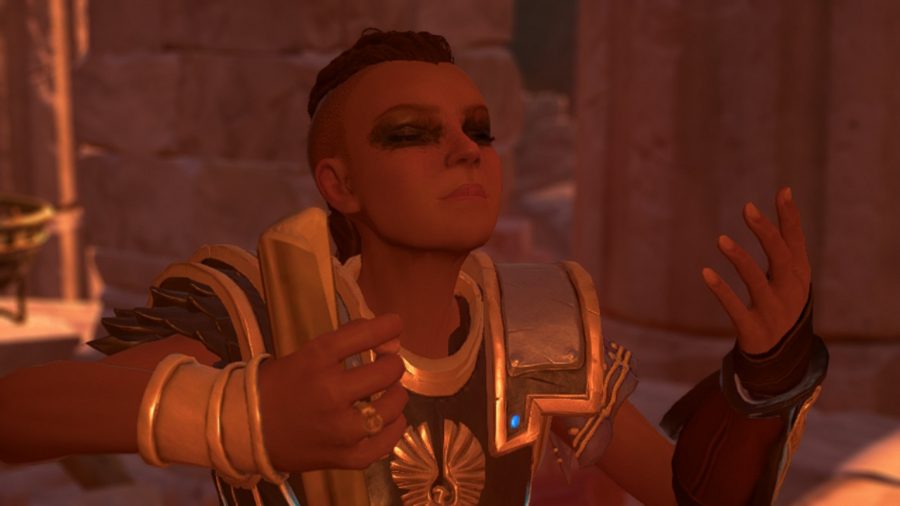 How to craft potions

You can craft potions at a Cauldron of Circe. There is one such cauldron at the House of the Gods, but you find many others across the landscape of the Golden Isles.

Once there, you can craft Health Potions, Stamina Potions, Attack Potions, and Defence Potions using the berries and flowers you collect. When you start your adventure, you can carry up to six of each potion, but as you progress you can upgrade this capacity.

You’ll need the following quantities of ingredients to craft potions, and here’s what they do:

A Health Potion requires five Pomegranates to make, and restores three health chunks immediately upon use.

A Defence Potion requires six portions of Flower Nectar to make, and improves defence by +20% for 90 seconds. 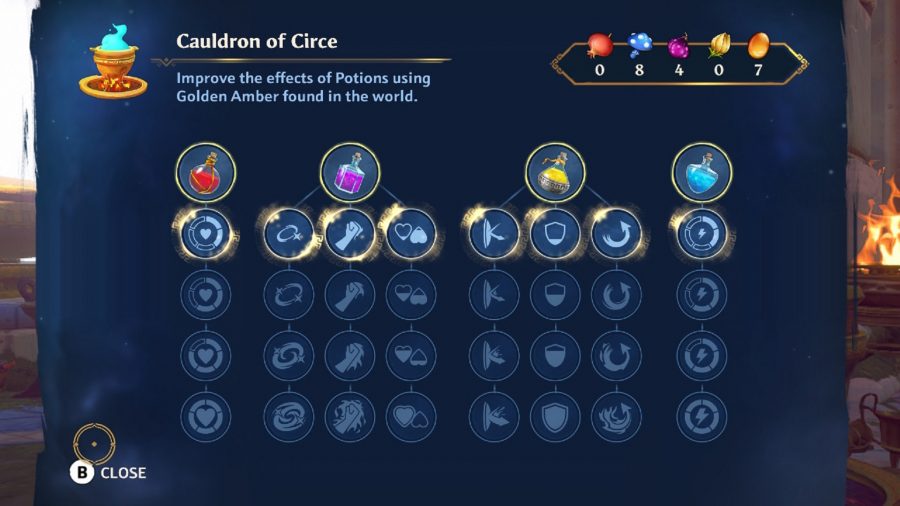 How to upgrade potions

You can also upgrade potions at the Cauldron of Circe. This uses a unique currency, Golden Amber. You can find Golden Amber in chests or by cutting down glowing tree stumps. Here’s what upgrades you can add to your potions:

It costs three Golden Amber to upgrade the potion a first time, and the price rises by three with every subsequent upgrade.

You can upgrade your Stamina Potion to refill more stamina chunks. You can upgrade it four times, increasing the potion’s effectiveness by one chunk per upgrade to a maximum of six chunks.

The cost is the same as for upgrading the Health Potion, starting at three Golden Amber and rising by three every time you upgrade. 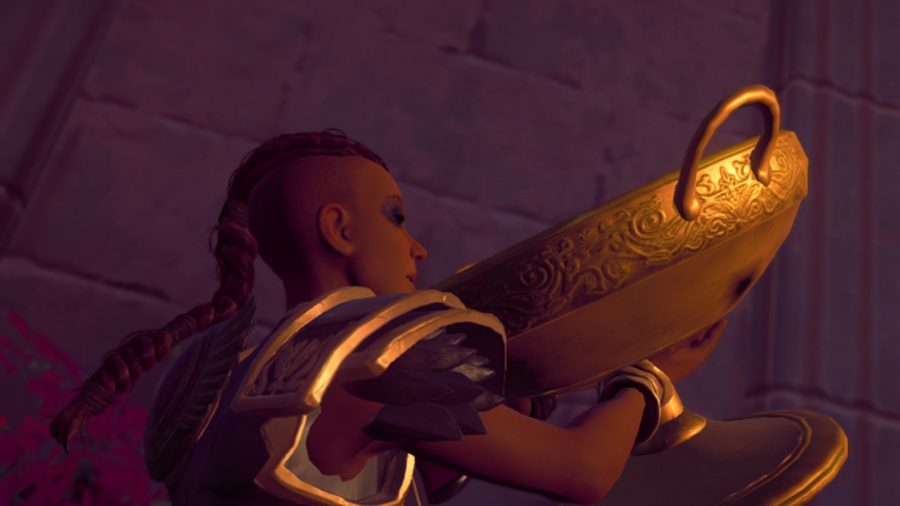 There are three branches of upgrades you can follow for Attack Potions. The first adds to 15% stun per upgrade, the second increases damage by 20% per upgrade, and the last restores 5% of a health chunk per upgrade.

Each branch can be upgraded four times, with varying costs. Upgrades for stun and health cost four, seven, 11, and 16 as the boons gain power, and upgrades for damage cost five, nine, 14, and 20 Golden Amber respectively.

Similarly to the Attack Potion, there are three branches of upgrades you can pick from to enhance your Defence Potions. The first reflects projectiles for 25% of their damage per upgrade, the second increases defence by 20% per upgrade, and the last inflicts increasing amounts of damage to attacking enemies with every upgrade.

This damage starts at 200 for the first upgrade, then increases to 420, 1,090, and 2,140 in turn. Upgrades cost the same amount of Golden Amber as those for the Attack Potions – the first and last branches cost four, seven, 11, and 16 Golden Amber per upgrade, and the defence boost costs five, nine, 14, and then 20 of your precious Golden Amber to improve.

That’s all you need to know about crafting potions in Immortals Fenyx Rising. If you’re into this kind of thing, though, we’d recommend checking out our lists of the best Switch RPGs and best mobile RPGs for more roleplaying goodness.