The second of two new arrivals to League of Legends: Wild Rift, Kha’Zix is a beetle-like creature with scythes for hands and a carapace that bristles with spikes. He grew up in the void and learned how to take down things even more horrifying than he is, so you know not to mess with him.

In more mundane terms, he’s an S-tier Jungler Assassin with some really interesting abilities that allow him to evolve in different situations and play in a range of distinct ways. There’s a lot you need to learn to get the most out of League of Legends: Wild Rift’s Kha’Zix, and that’s why we’ve written this guide. It breaks down his abilities and lays out his best build, allowing you to make the most out of Kha’Zix’s strange skillset.

When Kha’Zix is hidden, his claws start to glow. This shows you that his passive is charged up. Your next attack against an enemy Champion will deal more damage and also slow them down.

The charge will remain even if you’re spotted, and you can use it in tricky ways to get an advantage. You can even complete a combo, hide again, then catch up with your target thanks to the slow effect.

This is Kha’Zix’s main damage dealer. If an enemy is isolated, which you can tell by the ring around them, it’ll do 110% more damage. That means you can one-shot some Champions if they’re alone.

This is a skill shot attack that does sizeable AoE damage. If Kha’Zix is in that area, he’ll also benefit from a healing effect. It’s super useful when you’re clearing the jungle camps, and you can use other abilities after it to cancel its backswing animation.

Leap makes Kha’Zix leap forward and deal a ton of damage when he lands. It does a decent chunk of damage and is even more useful when it’s evolved. What does that mean? Well, that’s where Void Assault comes in.

The passive part of Void Assault allows you to evolve three total abilities at level five, nine, and 13. If a Nemesis Duel kicks off and you win, you’ll get the chance to evolve all of your abilities.

Void Spike becomes Spike Racks. This adds two spikes that fire out diagonally to Void Spike’s target direction. If they hit an enemy, the poor chump will be slowed by 60%.

Evolving Leap turns it into Wings. This extends the range of Leap even further.

If you Evolve Void Assault, you can turn invisible for two seconds three times within the same time limit.

The standard Evolution is to evolve Taste Their Fear first, then Leap, and finish off with either Void Spikes or Void Assault depending on your preference. 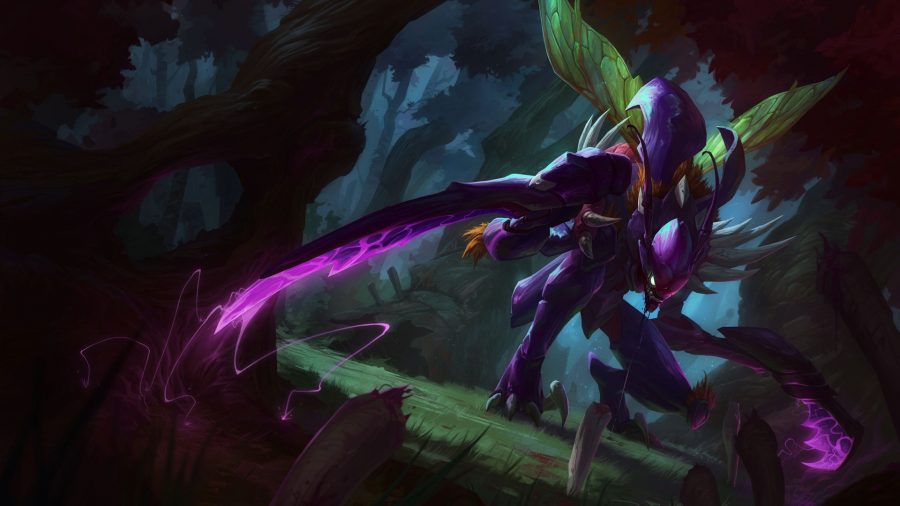 With this you’ll get extra health and extra mobility. The armour shred passive will help you out in the early game when you’re in a trade.

Because Kha’Zix is reliant on his abilities, the extra ability haste you get from these boots is really important.

The time you spend invisible using Void Assault pairs really well with the Nightstalker passive here. Combine that with Unseen Threat and no one is going to want to see you near them.

This grants you extra armour penetration, letting you slice through tanks like a deadly void creature.

If you’re in a tight spot, this converts burst damage into DPS. That can give you the time you need to survive.

This grants you a Resurrect passive, allowing you to push your luck a little bit more without worrying too much about dying.

WHAT ARE THE BEST RUNES FOR KHA’ZIX?

This gives you a burst damage bonus that should put you in a good position to one-shot soft Champions later in the game.

With this you’ll get extra damage and extra armour penetration. That’ll help you out a lot in clearing Jungle camps in the early game.

More HP and more Tenacity. Kha’Zix can get in real trouble when trying to perform some crowd control, so the Tenacity comes in really handy.

With this you get a stacking Haste bonus. As we mentioned before, Kha’Zix relies on his abilities, so the quicker you can use them, the better.

WHAT ARE THE BEST SPELLS FOR KHA’ZIX?

We’ve said it before, we’ll say it again – Smite is the most important rune when you’re a Jungler. Upgrade it into Red when you’re against duelist Junglers, or otherwise upgrade it to Blue.

Adding to your offensive and defensive capabilities is always a good idea. And hey, that’s exactly what Flash does. Bosh.

If you want to see our definitive ranking of every Champion, best make a quick trip to our League of Legends: Wild Rift tier list. We’ve also put together build guides for Wild Rift Malphite and Wild Rift Seraphine if you’re struggling.