Seraphine is a superstar with a voice that can change the world – and she’s going to use it to dominate the Mid Lane in League of Legends: Wild Rift. She’s a sparkly mix between a mage and an enchanter, and she’s loads of fun to play.

League of Legends: Wild Rift’s Seraphine is one of the easiest champions to get to grips with because of her AoE Abilities that are easy to hit with and the fact that she’s useful wherever she finds herself. She’s pretty squishy when anyone gets up close and personal with her, though, and you need to be smart about your positioning if you want to get the most out of her.

In this guide, we’re going to walk you through Seraphine’s moves and how to use them, as well as giving you a decent idea of the build you should be using to make sure Seraphine is as powerful as she can possibly be. Want to change the world with the power of your voice? Then Seraphine is the League of Legends: Wild Rift Champion for you.

Stage Presence is a two-part passive that adds some really interesting twists to Seraphine’s arsenal. First, there’s Echo, which means that the third time Seraphine uses one of her other Abilities, she casts it twice. There are other benefits, too: High Note deals twice the damage, Surround Sound heals allies, and Beat Drop’s Slow becomes Rooted, which you can use to stun enemies.

The second part is Harmony. This gives notes to allies close to her, with Seraphine’s range and magical damage increasing with every note up to a maximum of 20 notes.

This is Seraphine’s main damage-dealing ability. It’s an Execution move, which means it does more damage the lower the target’s HP is. Using it with Stage Presence makes it a great way to take down Champions. If you’re playing in a Support role, make sure you don’t steal kills from your Marksman.

This creates an AoE around Seraphine that acts as a Shield and also ups the movement of any allies within it. Remember that the third casting of Surround Sound will also grant healing thanks to Stage Presence.

This is a CC ability that slows anyone it hits. If a target is already slowed, then they’ll be rooted. Already rooted? Then they’re gonna get stunned. Enemies don’t need to be slowed by Seraphine for them to end up rooted either.

Encore deals a bunch of magical damage and also charms any enemy it hits, slowing them down by 40% for a second. The cool thing about Encore is that it extends after every character, ally, or enemy that it hits. That means you can use it to hit enemies that are more than half the map away if you use it right. 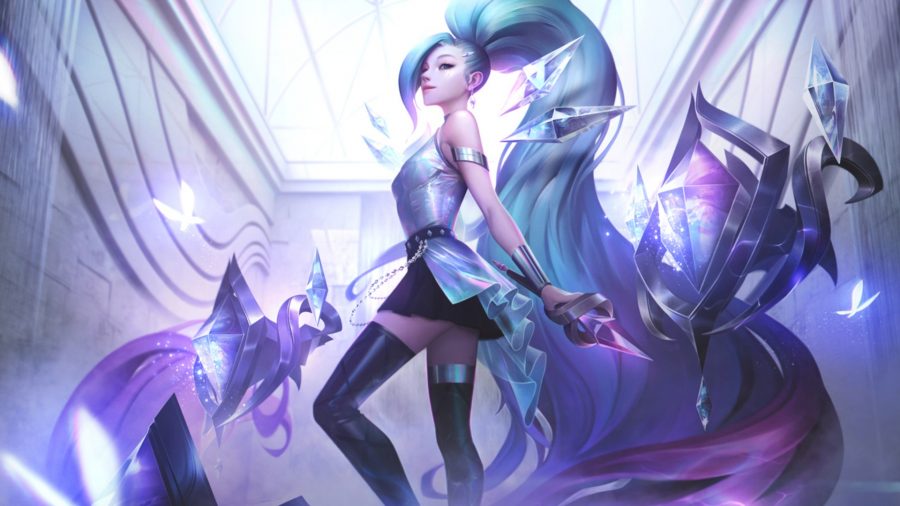 This adds extra magical damage to your spells and makes you even more deadly.

This adds all sorts of extra cooldown bonuses to your Abilities and can make your Ultimate cooldown even quicker thanks to its Soul Charge passive.

These reduce your cooldowns even more. Use the Stasis enchant to counter burst Champions or Quicksilver to counter CC.

This gives you the most AP of any item, making your attacks even more powerful than they already are.

As well as the extra AP and HP, it also adds a slowing effect to all of your Abilities that deal damage.

This one gives you extra magical penetration, which is super useful because Champions will add magical protection to try and counter you.

What are the best Runes for Seraphine?

Gives your attacks even more damage. It’s the go-to rune when you want to whomp fools.

Even more damage. This one also gives you extra penetration as well, letting your damage get through.

With this, you’ll get a little boost to your HP and some added slow resistance.

This grants you a boost to your gold and the HP you gain by eating Honeyfruits.

What are the best Spells for Seraphine?

Throwing Ignite into your toolset lets you use your range to take down enemies who would otherwise have got away.

Because Seraphine is such a squishy Champion when attackers get to her, it’s important to take Flash so you can get away quickly.

And that’s everything you really outta know about Seraphine. If you want to master a different Champion, be sure to check out our Wild Rift Braum, Wild Rift Zed, and Wild Rift Ezreal build guides. We’ve even put out a League of Legends: Wild Rift tier list to help you decide which Champion to use.