Rengar is a new and fearsome League of Legends: Wild Rift Champion. He’s an S-tier fighter who you’re most likely to find in the Jungle, although he’s a capable Baron Laner as well. He’s also a giant albino lion man wrapped in some of the coolest armour we’ve seen for a while. And he’s even got an eye patch. Yeah, Rengar is pretty darn cool.

He’s a flexible, complex character whether you’re playing him in the Jungle or the Baron Lane, and he’s strong enough in the early game to take down most other characters. In the late game, he can become a fearsome one-shot presence, so long as you’ve played him right early on. However, you’re going to have to put some time in to really get to grips with his abilities.

Hopefully after you’ve read this League of Legends: Wild Rift Rengar guide, you’ll be a few steps closer to understanding how best to use Rengar. We’ve broken down his abilities and suggested the best build if you’re taking him into the Jungle. Naturally, you want to be a super cool lion man, and with this guide your dream will soon become a reality. So let’s get on with it.

Rengar technically has two passives. Unseen Predator lets him leap at his target when he’s camouflaged or when he’s in the brush. He can use it on any targetable unit, not just Champions and minions.

Rengar also generates Ferocity whenever he auto-attacks or uses an ability. If he has no Ferocity when he uses Unseen Predator, he’ll gain one stack. When he has four stacks, the next ability he uses will be empowered and gain additional properties.

Rengar’s other passive is Bonetooth Necklace, which gives him a trophy when he takes down a unique Champion. For every trophy, which stack up to five, he gains additional damage.

This one boosts the damage of Rengar’s next attack and amps up his attack speed for three seconds. If it’s powered up by Ferocity, it’ll do even more damage and speed you up for five seconds.

Cast this before jumping out of the brush with Unseen Predator to deal massive damage to unsuspecting opponents. Savagery is also an auto-attack reset, which adds extra layers to your combo potential.

Battle Roar is an AoE attack that also heals Rengar for half of any recent damage he’s taken. Use it right after an opponent has hit you with their most damaging attack to instantly heal.

While Battle Roar is empowered with Ferocity, you can cast it when you’re controlled to instantly cleanse any effects. It also grants you a movement speed boost as well. Make sure you always know which version of Battle Roar you’re about to use.

This one sees Rengar throwing a bola to slow down his target and deal some damage. The Ferocity empowered version of the ability roots your target, making it super useful against Champions with mobility moves.

You can chain Bola Strike with a leap to great effect. If you miss with your Bola, instantly cast Flash to cancel the animation and put yourself in a better position to catch anyone who’s fleeing from you.

Rengar’s ultimate reveals the nearest Champion and grants him camouflage and extra movement speed. You’ll also get armour shred for your first attack out of camouflage, which will knock down your opponent’s armour for four seconds. 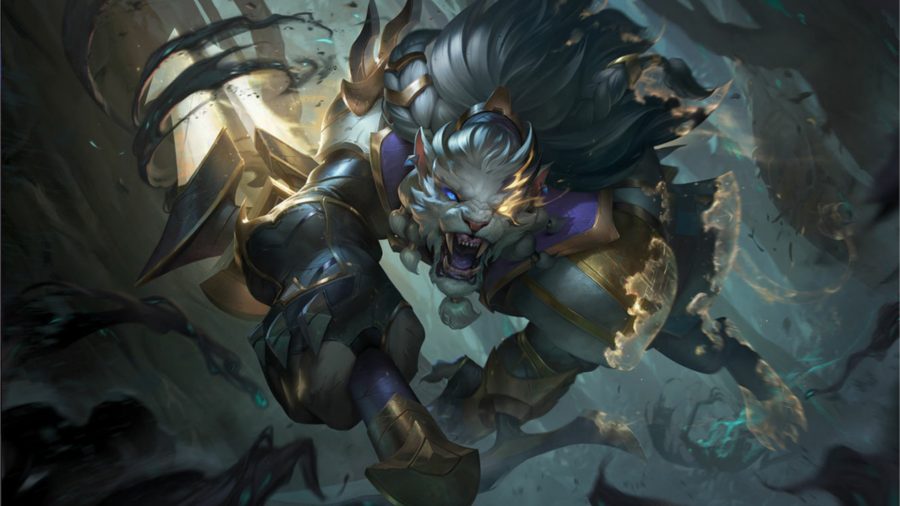 The Momentum passive here makes you speedier, stacking with some of your abilities, and Spectral Haste gives you more damage when you attack with a full stack of Momentum.

These up your movement speed, which is always handy in the Jungle. They also increase ability haste and boost your Summoner spell cooldowns.

This ties in nicely with Battle Roar, with its Cauterize letting you convert 30% of the damage you just received into DPS while ignoring the rest of it.

Guardian Angel’s Resurrect passive is like another line of defence when Cauterize and Battle Roar aren’t quite enough to save you.

The extra armour penetration you get from Mortal Reminder will allow you to take down even the most geared-up tanks.

What are the best runes for Rengar?

Take this instead of Electrocute. It ties in nicely with all of your other abilities, since it does greater damage the more you use it, and is incredibly useful in extended trades.

This lets you gain bonuses when you enter combat, which can be super useful when you’re leaping out of the brush and taking your opponent by surprise.

If you’re Jungling as Rengar, this is the best choice because it’ll help you clear out camps faster in the early game.

The extra Tenacity you get from this can come in handy when you don’t have enough Ferocity stacks to clear out CC effects.

What are the best spells for Rengar?

This is really useful for farming camps and completing objectives. If you’re up against strong duelist junglers, simply upgrade it to Red. If not, Blue is your best bet.

As we’ve already mentioned, Flash can be super useful for Rengar – and that’s not counting all of the extra offensive and defensive options that it opens up.

If you’re looking for some extra help, be sure to give our League of Legends: Wild Rift tier list a read, then make a quick trip to our Wild Rift Irelia and Wild Rift Orianna guides.