Senna, The Redeemer, will make her way to League of Legends: Wild Rift as part of the 2.3 update. Since she was a child, Senna was haunted by the Black Mist, leading her to become a Sentinel of Light to fight the very thing that had cursed her life. However, she was killed by the wraith Thresh. Eventually, she returned, though she was not the same. Now, she wields both the dark and the light, hoping to end the Black Mist once and for all.

Much like her husband, Lucian, League of Legends: Wild Rift Senna is a marksman. As you can probably decipher from the type of champion she is, Senna attacks at range, and has abilities designed to inflict punishment from a distance. Currently, we have no solid release date for Senna, but given the 2.3 patch is out now, she will likely land in Wild Rift in the next few weeks.

In this guide, we will speculate on her abilities, and offer advice on what spells, items, and runes are suited to her. We have designed this guide with a duo lane build in mind, so consider that when creating your own Senna build.

What are Senna’s abilities?

Free those that are trapped by the Black Mist and give yourself an attack boost in the process. When a unit dies near Senna, it’s spirit becomes trapped within the Black Mist. If you attack the mist, the spirit is freed, giving Senna a boost to damage from her relic cannon. Oh, critical chance and attack range are also boosted.

Do bear in mind that attacks from the relic cannon do take longer to perform, though it does deal bonus damage and give Senna a brief increase in movement speed.

Want to heal your teammates, or do you want to cause some damage to your enemies? Wait a minute, Piercing Darkness allows you to do both! Senna has embraced both the light and dark, as such, when she shoots from the twin barrels on her relic cannon, she fires a unified beam through targets. Enemies are injured, while allies regain health.

Are you familiar with the saying “don’t let them get away”? Well, Senna took this to heart. Her Last Embrace ability stops her enemies in their tracks as she sends a wave of Black Mist after them. It temporarily roots them to the spot, as well as those nearby.

She lost her life to a wraith but that will not stop her from becoming one herself. Senna surrounds herself with the Black Mist, becoming what took her life. However, any allies that step into the mist are shrouded in darkness and appear as a wraith. When in this form, you, and your comrades, are unselectable, have your identities hidden, and receive a boost to your movement speed.

Another ability that allows you to aid allies while dealing damage to your foes. When using Dawning Shadow, Senna unleashes a huge beam, one that protects allies and inflicts pain on any enemies caught in the crossfire. It is a very powerful attack that could save your team, while also tearing a hole in enemy defences. 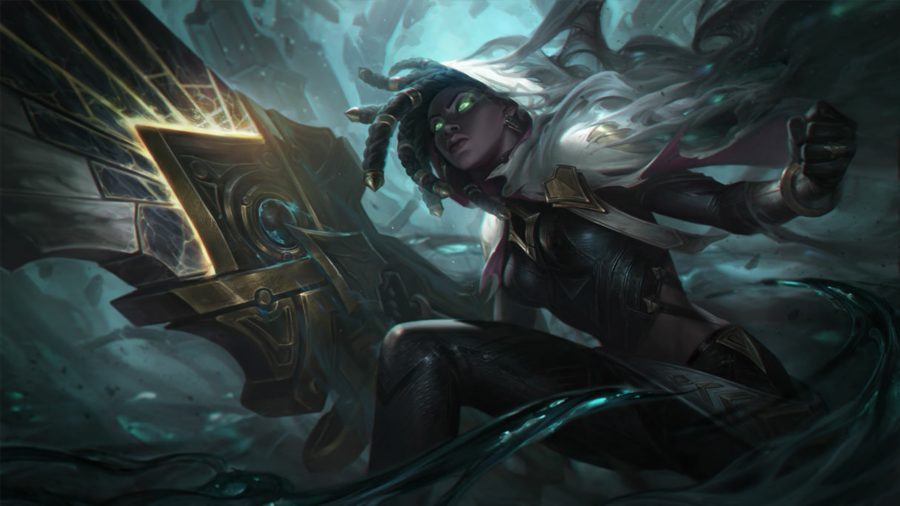 She died once. Let’s not make that twice. Guardian Angel resurrects Senna should she fall in battle. So, do not be afraid to get aggressive. When you know death is not the end for you, it becomes that much easier to trade blows, taking the life of the opposition. This item also provides a boost to your attack and armour. A must have on any battlefield.

We’ve already mentioned that Senna’s relic cannon is on the slower side to fire, so it is time to speed things up a bit! Runaan’s Hurricane gives a boost to both attack speed and critical chance.

Speaking of speeding things up, you may want to increase the pace at which Senna moves around the battlefield. As such, we recommend the Plated Steelcaps to gain an increase to movement speed, as well as a boost to armour and a decrease to damage received from basic attacks. However, the Boots of Swiftness are also a good fit for Senna, especially if you are not too bothered about reducing incoming damage.

In the duo lane, the marksman is the bringer of pain, so being able to effectively attack the enemy is vital. The Hextech Gunblade will provide Senna with an increase to both attack damage and ability power. Senna’s abilities are deadly, give them a boost and see her wipe the floor with her competition. Oh, and this item has passive abilities attached, one gives you health and the other causes further harm to your foes.

Again with the speed. Senna will get a nice increase to attack speed and critical chance with the Rapid Firecannon. Oh, and she also gets a slight increase to her movement speed.

Senna has suffered enough, she deserves her redemption. So, equip her with Trinity Force to help her on the battlefield. It will increase attack speed, haste, and damage, all of which is vital to securing victory. Not to mention the slight health boost it gives you too. Any health is good health.

What are the best runes for Senna?

Land three consecutive shots on enemies to gain a nice boost to your movement speed, and become resistant to slow effects. This rune could not only save your life, but also help you take it from another by lining up the perfect shot. The additional speed may put you in a position to unleash one of Senna’s abilities.

It is kill or be killed, and the Champion rune could determine which one you are. It gives an increase to the damage that you cause to opposing champions. Combine this offence with the possible defensive capabilities of your support ally, and you could clean house.

You are not winning any battles without looking after your health. This rune grants you bonus health and will increase your defence when below 50% health.

Senna has some good skills in her arsenal, it would be a real shame if you could not make the most of them. Hunter – Genius increases your ability haste.

What are the best spells for Senna?

Senna can deal some damage. She has some devastating abilities that can end the opposition. However, due to the slower nature of her relic cannon, she is often left exposed. So it might be a good idea to equip her with Heal. Depending on your level, she could recover a substantial amount of health. Oh, and both Senna and an Ally champion get a quick boost to movement speed. You could well recover from an assault, to then launch your own counter attack.

Now you see her, now you don’t. Pick a direction and run in it, you can either close down the opposition or make a hasty retreat. Either way, Flash is a must have spell for Senna. It could well set you up to unleash hell upon your enemies.