What is Mobile Legends? Mobile Legends is a mobile MOBA – think League of Legends or Dota 2. For those unfamiliar with the genre, they’re ‘multiplayer online battle arenas’ where you and your teammates choose from a roster of heroes and set out to defend your base while ensuring the total obliteration of the enemy base. They require strategy, team coordination, mechanical skill, and knowledge of a large library of heroes, items, and abilities.

Don’t worry, though, as we’re here to help you get started with our Mobile Legends guide. Like most MOBAs, the Mobile Legends map is split diagonally in half, and teams spawn in their bases in the bottom left or top right corner of the map. The bases are connected by three lanes – top, bottom, and mid – and weak allied computer-controlled units spawn periodically from your base and march down these lanes toward the enemy. Outside the lanes lies the jungle, occupied by neutral mobs which are killable by either team.

Your heroes start off relatively feeble, but throughout the match you will gain gold and levels by killing mobs and enemy heroes – then you can purchase items and level up your abilities to become stronger. Gradually, you’ll take objectives and control territory until you’re strong enough to trample all over your opponents and win the game.

everything in our mobile legends guide:

How to play Mobile Legends

Mobile Legends is a free-to-play game available on Android and iOS.

Once you’ve downloaded the game, you’ll be taken through a short tutorial that will teach you how to navigate the map, use your abilities, and purchase items. You’ll need to play a few practice matches before you can start playing ranked mode, but before long you’ll be competing against real players from across the world.

How to win in Mobile Legends

In order to win a Mobile Legends game, you need to destroy the Enemy Base Inhibitor. Before you can start damaging it, you must destroy the preceding turrets in each lane. Turrets inflict powerful damage on enemies who stray too close, but they prioritise attacking minions first – this means you can damage turrets safely as long as you have a minion wave with you to absorb the damage.

Of course, while you’re chipping away at enemy buildings, you must also defend your own. Depending on your chosen Mobile Legends hero and class, you’ll be able to help your team defend by rotating to other lanes and applying pressure in different parts of the map, and choosing the right time to take objectives, such as after your team secures a kill and is at an advantage.

How to unlock Mobile Legends characters

Each week, eight Mobile Legends heroes are rotated into the free hero pool, allowing you to play them in unranked mode. If you’re a Starlight Member, you’ll have access to the Starlight Free Heroes as well, which you can use in ranked mode. 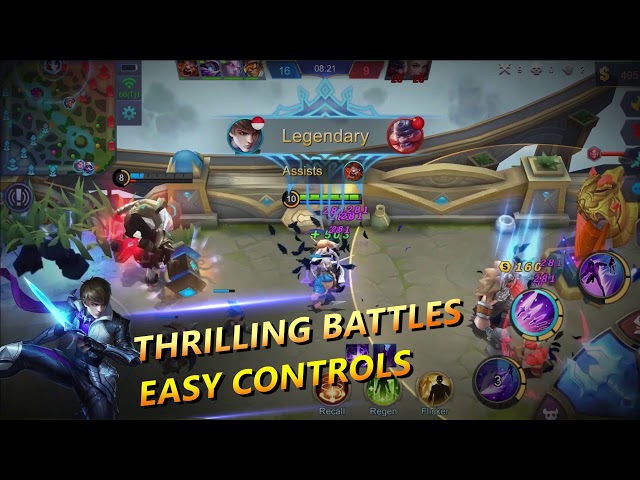 How to get Mobile Legends Diamonds

How to unlock battle spells

Battle spells are equipped in the pre-game lobby for use during each game. You’ll choose your battle spell depending on the draft in each match. You won’t have access to all of the battle spells initially, but you can unlock them steadily by leveling up your account.

How to jungle in Mobile Legends

Every Mobile Legends team should have a Jungler, who spends their time killing neutral mobs in the jungle, obtaining buffs. If you’re going to jungle, you should pick the battle spell Retribution, which can be used to deal huge damage to a nearby Jungle monster, and reduces the damage you take from them. You’ll also need to make sure you buy Jungling items.

In the Jungle, you’ll find standard Jungle Monsters, who grant you health, mana and gold. There are also blue and red mobs, who grant you buffs depending on your class, Turtle, who grants your team experience and gold upon defeat, and Lord, who rampages down a lane toward the enemy base once killed.

How to change my Mobile Legends item build

Before the game begins, you can pick from premade item builds in the lobby after selecting your hero. During the game, you can purchase items manually by clicking on the gold icon, which will take you to the shop.

how do Mobile Legends ranks work?

The ranks in Mobile Legends are as follows: Warrior, Elite, Master, Grandmaster, Epic, Legend, and Mythic. Each rank has a number of divisions, which each require a varying number of stars to obtain. You gain a star for each victory, and lose one for each loss – unless a player in your team goes AFK, in which case your star is protected – but only the first time it happens each day.