The Legend of Zelda: Skyward Sword HD remaster is here, bringing some motion control action with it – though you can choose to use button controls instead, as swinging joy-cons around isn’t for everyone. Skyward Sword’s original release fell in November 2011 on Nintendo Wii, before releasing for the Nintendo Wii U in 2016. Now, it’s time to join Link again as he fights to save Hyrule from chaos, and rescue Zelda while he’s at it.

In our Skyward Sword character guide, we aim to help you familiarise yourself with people found within the game and give you details on who they are, what their role is, and where to find them. There are roughly 80 characters, all of which are spread around various locations. 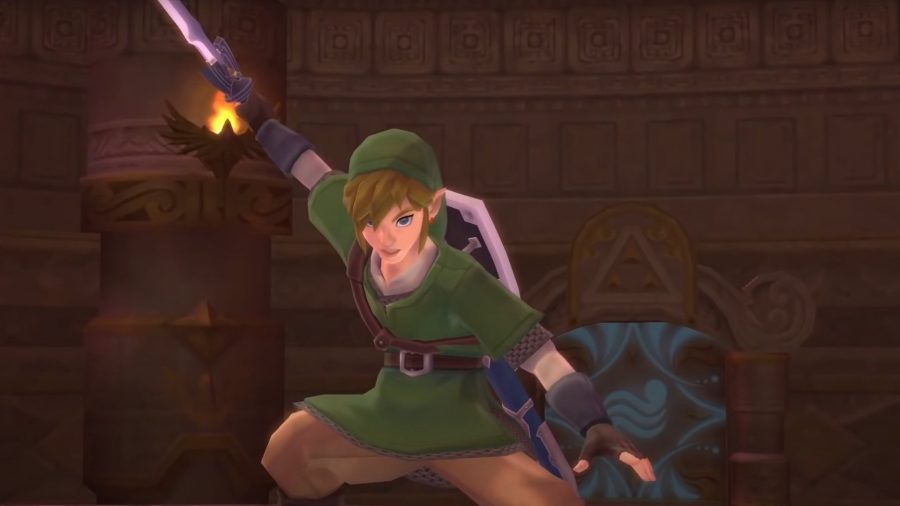 Our protagonist, the hero of the hour, Link, needs no introduction, but we will give him one anyway. If you’re a longtime Zelda fan, you’ll be more than aware of his heroic deeds, namely in saving Zelda, his best friend since childhood. In Skyward Sword, it’s much the same. Zelda needs saving – again – and the heroic Link goes after her. This perilous journey sees Link fight his way through temples, uncover mysteries, and ultimately put a stop to Ghirahim and his plans.

Admittedly, should our hero fail in his quest, the consequences would be disastrous, so go on Link, go forth and save the young woman. 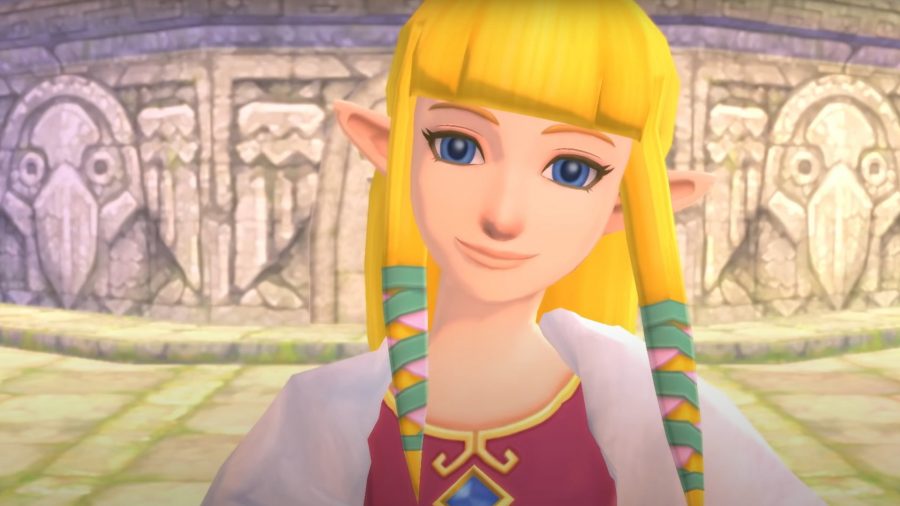 The girl that everyone wants, or so it seems. Zelda is normally the Princess and is the namesake of the entire franchise. In Skyward Sword, she and Link are students at the Knight Academy until a tornado appears, separating the two. The game’s primary antagonist, Ghirahim, is behind this, as he needs her soul to bring his master back, and free him from a long imprisonment. However, things are never that simple, as she manages to evade the Sword Spirit Demon with the help of Impa, and thus, the events of Skyward Sword begin.

As always, there is more to Zelda than meets the eye, and many of you are likely aware of her true role in Skyward Sword.

Fun fact, to date, the Skyward Sword version of Zelda is chronologically the youngest variation of her to appear in the games. Oh, and she’s not a Princess, unlike her other incarnations. 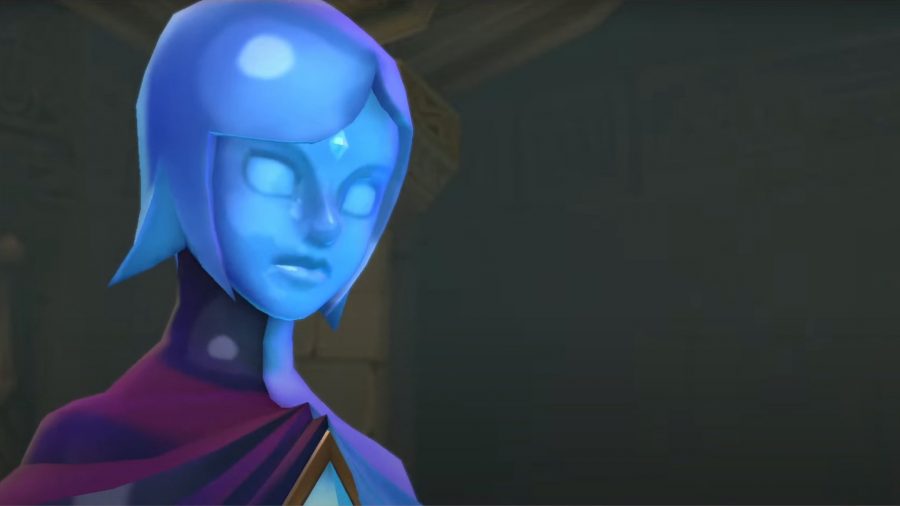 Skyward Sword would be a different game without the trusty spirit Fi to help guide us. Along with the Goddess Sword, she is one of Hylia’s two creations, and helps aid the chosen hero defeat Demise – and as you likely know, said hero is Link.

Fi comes to Link in his dreams at first, explaining who he is and that destiny has plans for him. From there, she guides him, offering assistance where she can until his battle with Demise is complete. 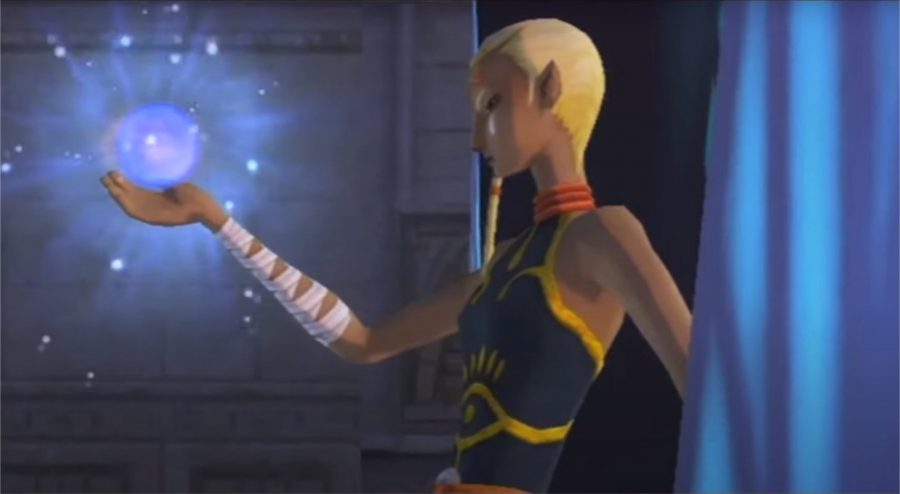 While Link has Fi helping him, Zelda has Impa, who longtime fans will know to be an aide to various incarnations of Zelda. On this occasion, she’s one of the chosen guardians of the goddess Hylia, and her primary objective is to watch over Demise in his imprisonment. Eventually, she meets and saves Zelda, to then guide her on a journey through Hyrule, preparing the young girl for her destiny. 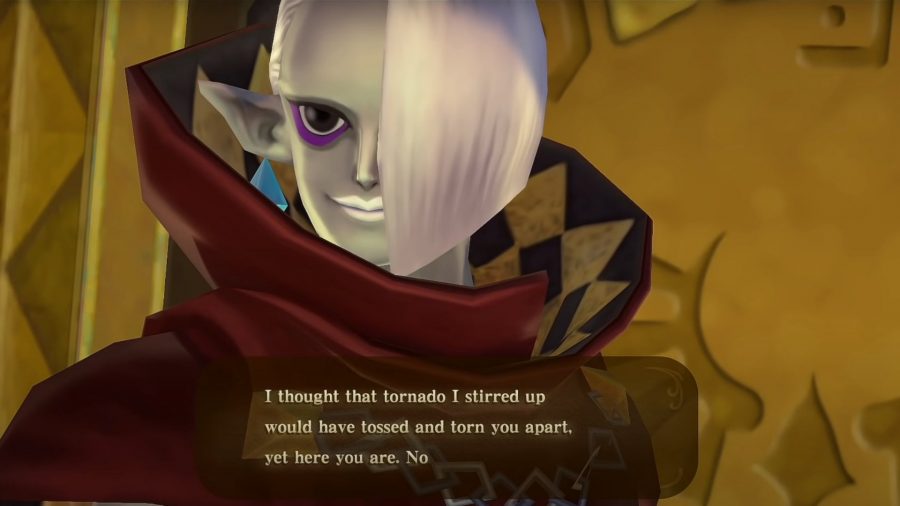 As one of the two main antagonists in Skyward Sword, Ghirahim – a Sword Spirit Demon – comes face to face with Link on numerous occasions. His mission is clear, he must kidnap Zelda as a means of bringing his master, Demise, back – the only being Ghirahim respects other than himself. Throughout the journey, it’s apparent that he considers Link to be no threat, rather a small speed bump. At least until Hyrule’s favourite hero continues to humiliate him in battle.

You come face-to-face with Ghirahim three times throughout the game – at Skyview Temple, Fire Sanctuary, and Hylia’s Realm. 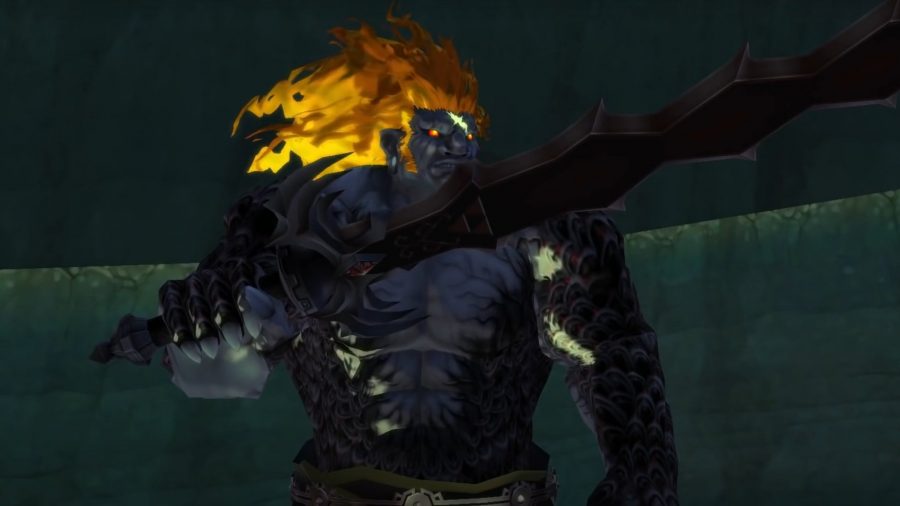 Big bad villain number two, the entire game is about Ghirahim freeing Demise from his imprisonment. Demise led an army years before the events of the game,  in an attempt to get his hands on the Triforce, only for Hylia to get the best of him. The goddess put a stop to his plans, and he has been in confinement for centuries. But, now, with Ghirahim’s help, it looks as though Demise will rise once more. 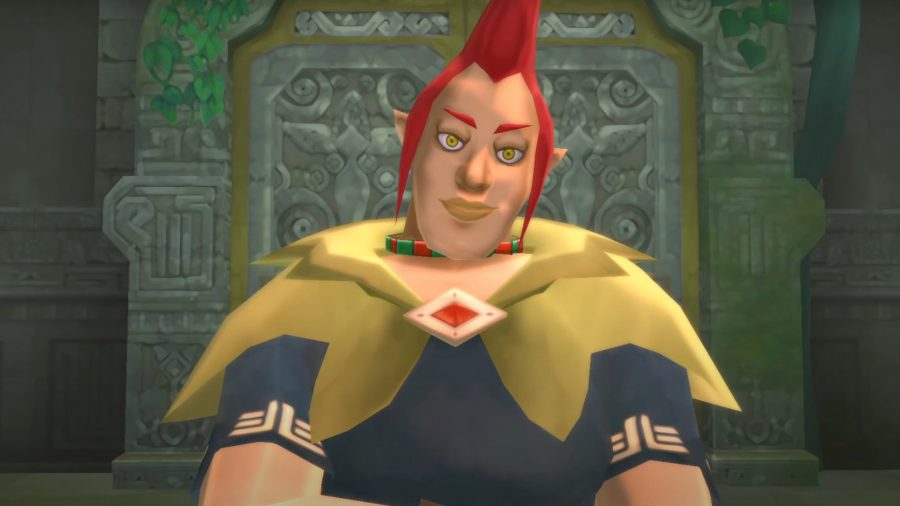 Groose is a bully to our hero, going so far as to hide his weapon to prevent him from taking part in an event at the beginning of the game. Then, once Zelda falls from the sky and onto the surface, he blames Link. So, throughout your journey, there are various run-ins with Groose as he tries to reach Zelda before Link.  Groose eventually realises he’s not going to be the one to save Zelda. However, he does create a contraption that comes in handy when taking on The Imprisoned. In the closing events of the game, he proves himself to be a true ally to both Link and Zelda. 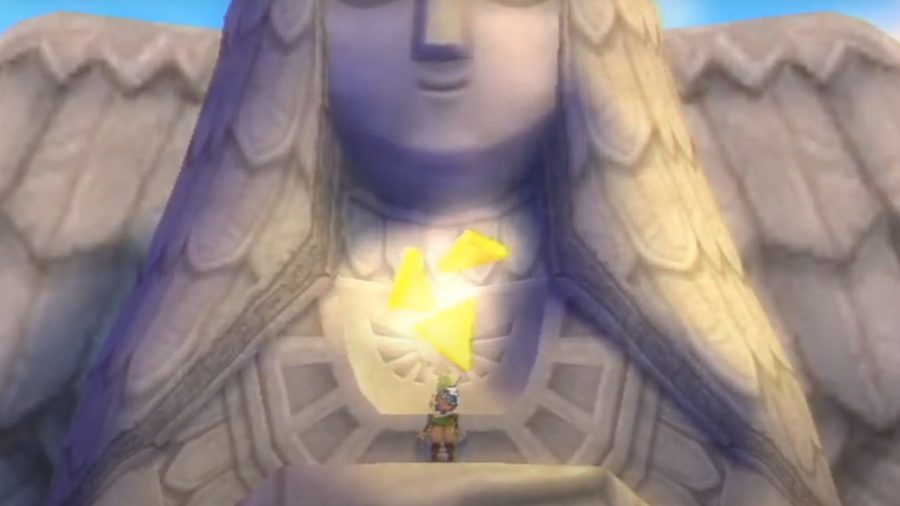 Though you never meet Hylia, she is an important figure in the history of Hyrule, and she also happens to be the reason Demise is under lock and key. You never see Hylia directly. Instead, you see her through statues and imagery. Of course, she’s the reason for Demise’s failure, and she’s the one that originally sent him to his imprisonment.

There is a new incarnation of Hylia, and she is pretty important in this story. 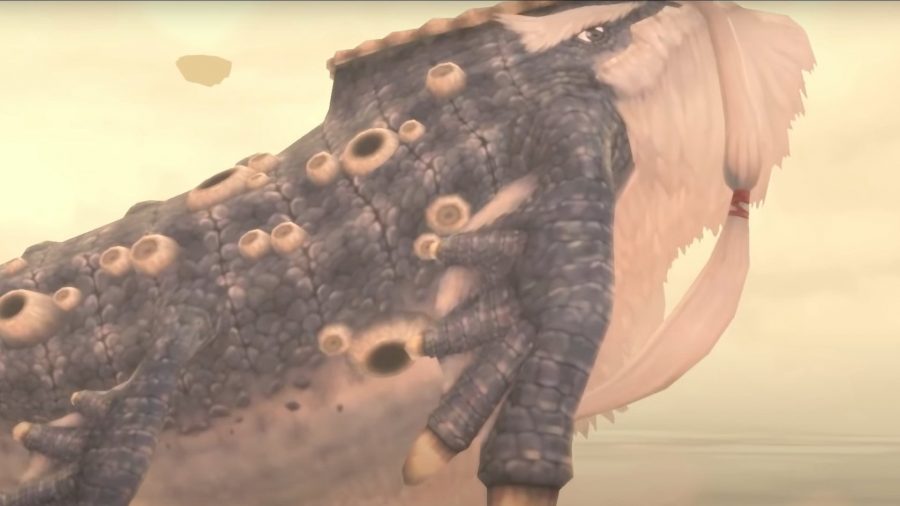 There are many locations in the sky. However, the majority of characters live in Skyloft. So, those that remain here get their own section. One of which is Levias, who appears as a boss, through no fault of his own. He watches over the citizens of Thunderhead until a parasite infects him, this is a problem for Link to deal with when the time is right.

Characters you find in the sky include: 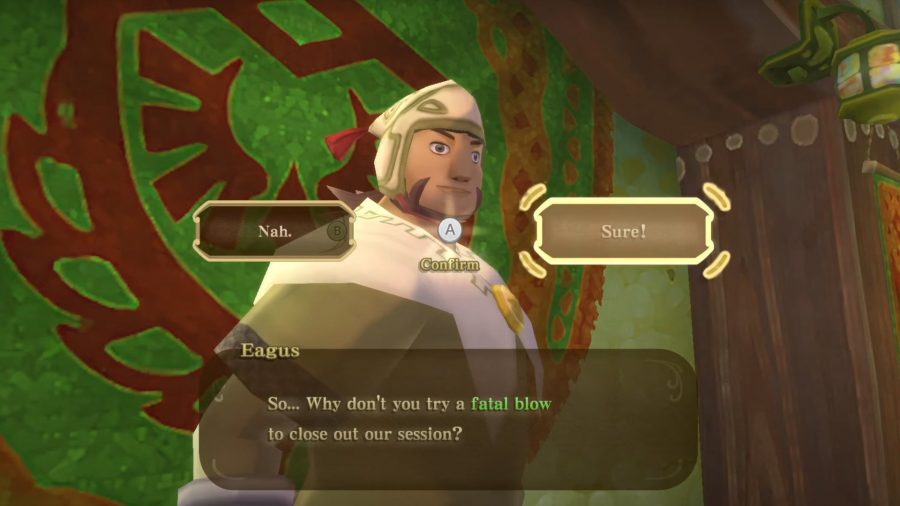 Skyloft – also known as the Isle of the Goddess – is where your journey begins, and it happens to be home to many characters – 34 to be exact. Several of which are worth taking note of, Eagus, for example, teaches Link the Skyward Sword fatal blow ability, which is a crucial ability to achieve success on this adventure. Seriously, you’re not beating the final boss without it.

Of course, as with any Zelda game, there’s a range of side quests to complete, so be sure to stop by and visit these characters from time to time.

Here’s every character in Skyloft: 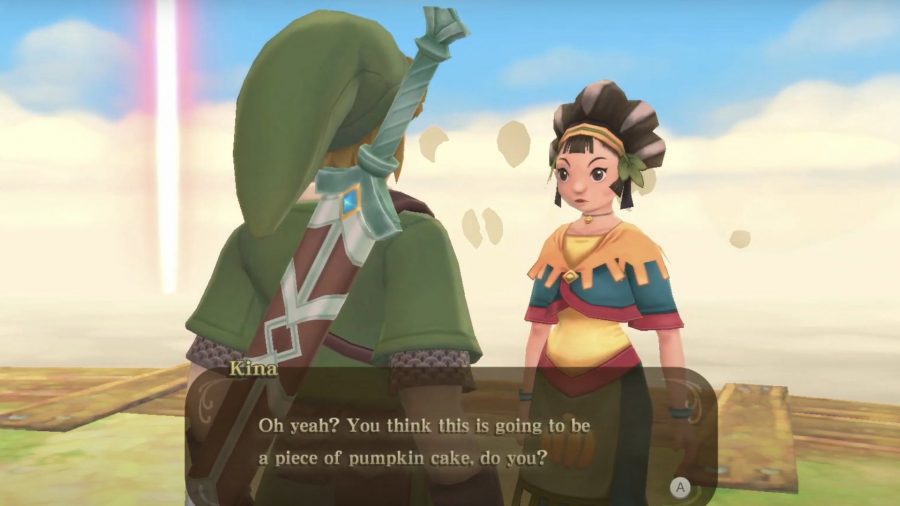 Pumpkin Landing is in the northeastern sky, though you must travel through Skyloft to get here. There are various side quests to accept, though only after reaching a certain point in the game. Be sure to check out the Lumpy Pumpkin, a pub that Pumm owns. It’s always nice to take a break and enjoy a refreshing drink.

The characters found in Pumpkin Landing are as follows: 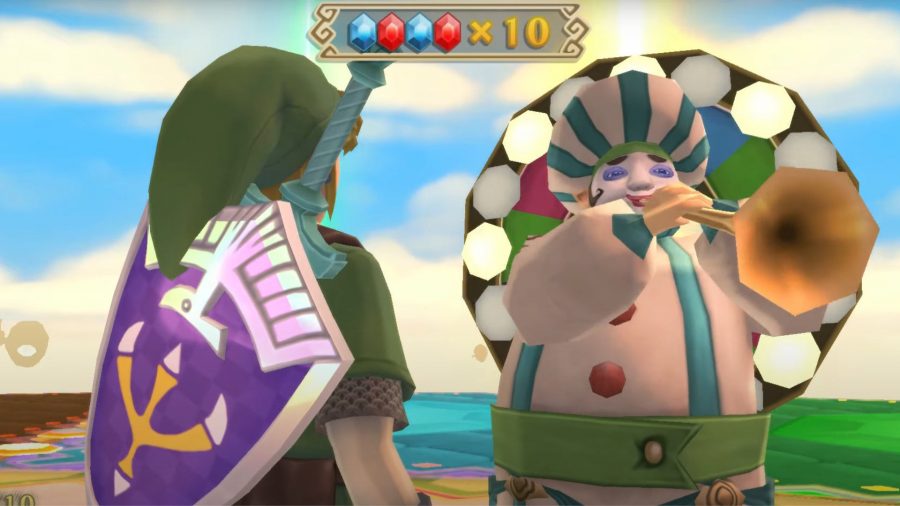 Longtime Zelda fans may be familiar with Fun Fun Island, given it’s made an appearance in numerous titles, though it’s nameless in Breath of the Wild. There is just one person to be found here, and that’s Dodoh. Essentially, the island is a mini-game, though there’s no playing it until you help its lonely inhabitant. 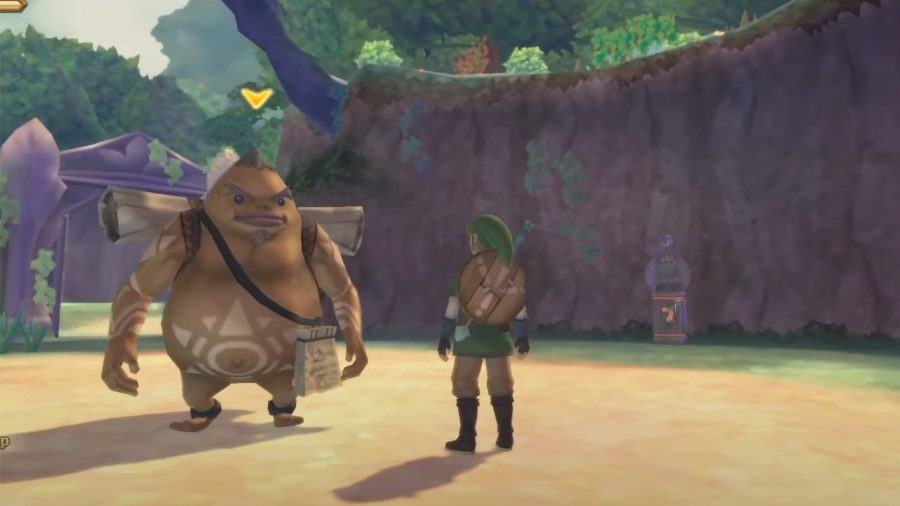 There are many locations on the surface, but only one character gets a kick out of moving around a lot, and that’s Gorko. He’s a travelling archaeologist that has an interest in the Isle of the Goddess. Link first finds him at the Sacred Grounds. His subsequent locations are the Deep Woods, the Temple of Time, and the Fire Sanctuary. 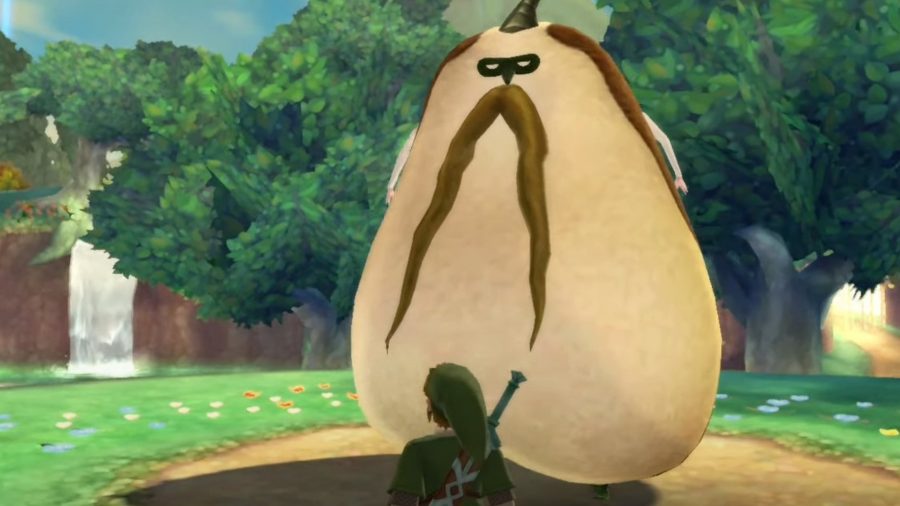 Let’s go into the woods today, and see what we can find. Here you will meet numerous characters, namely the Kikwis – some interesting folk, the head of which is Bucha. While here, Link needs to assist the chief to find his fellow Kikwis, you will get the slingshot for being a helpful being.

The Farron Woods characters are as follows: 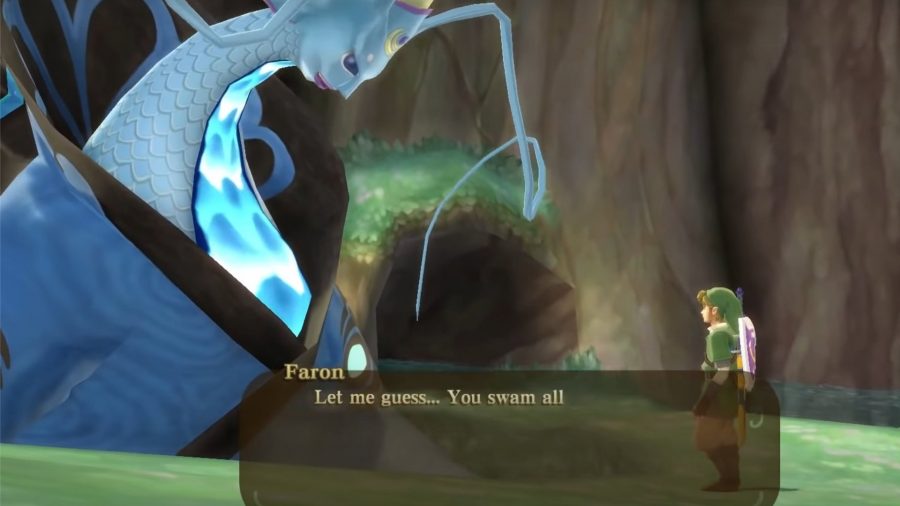 Lake Floria is quite beautiful and just as interesting, though there are only two characters of note to find here. One of them is Faron, a water dragon that protects the surface. Unfortunately, Faron has grave injuries, courtesy of Ghirahim. As such, she sits in a basin of sacred water to utilise its healing capabilities.

The characters of Lake Floria include: 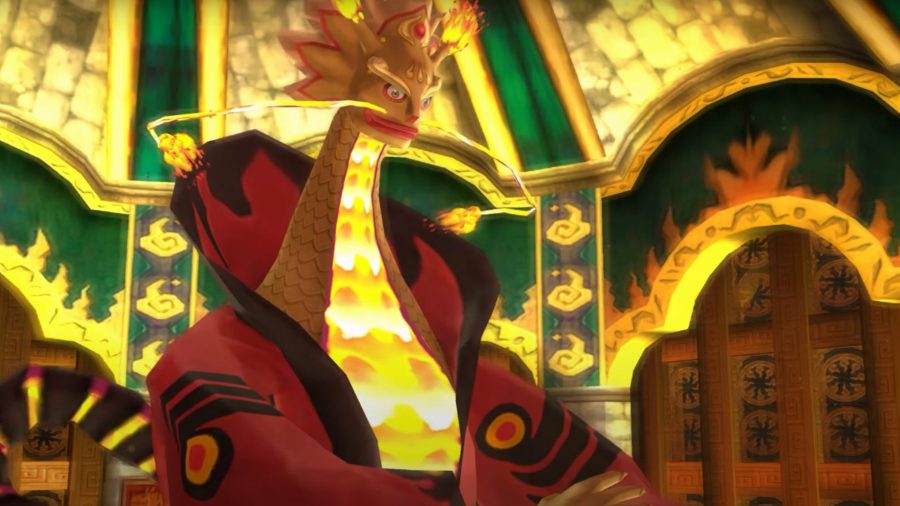 Welcome to Eldin Province, another area made up of several locations. There are many interesting characters around here – including one of the three dragons, this time, it’s Eldin. Like his brethren, Eldin protects this land and has done so since receiving his mission from Hylia.

Naturally, there are conversations to be had here, so be on the lookout for the locals.

The Eldin Province characters are as follows: 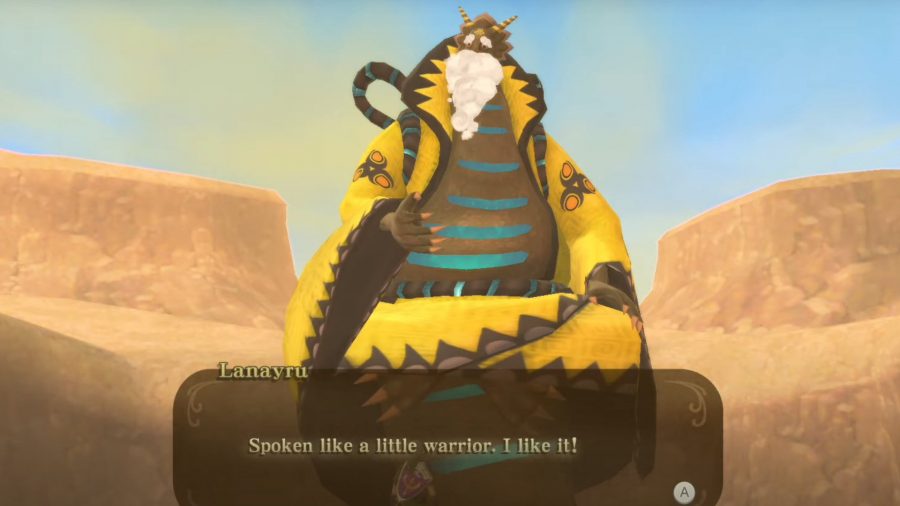 There are various locations within the Lanayru Province, including Lanayru Desert, the Temple of Time, Lanayru Shipyard, and Lanayru Gorge. Of course, as with most areas in the game, there are characters to meet here, one of which happens to be the location’s namesake – Lanayru. He is one of the three dragons in Hylia’s service, and has power over thunder.

There are a few characters to be found in Lanayru Province: 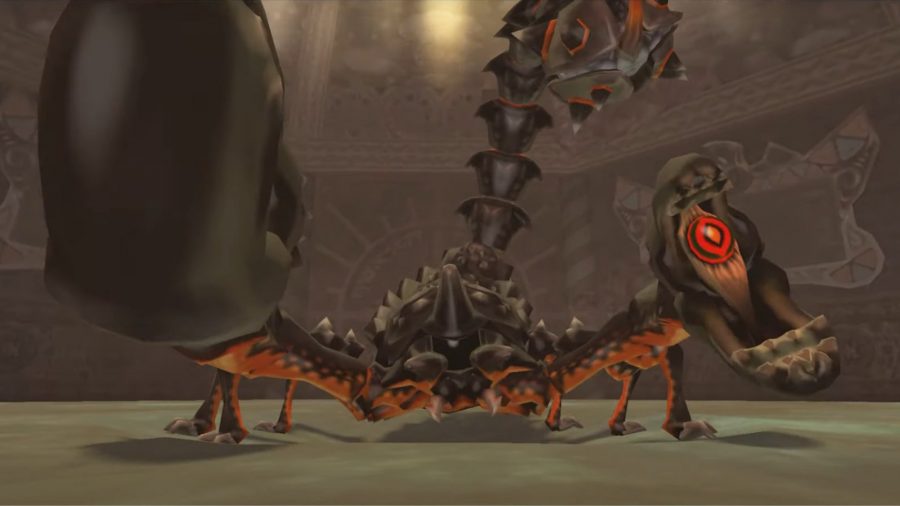 There are plenty of boss fights to be found within Skyward Sword, some of which are more interesting than others. However, they all share a common goal, and that’s to stop Link in his tracks. If you want a more in-depth look at these characters, or need help defeating them, be sure to check out our Skyward Sword bosses guide.

The Skyward sword bosses include:

And that’s all we have on the Skyward Sword characters. Be sure to check out our picks for the best Switch RPGs to find your next adventure.