Since its release in 2016, Stardew Valley has grown to become a legend in the simulation RPG genre. With its massive fanbase, the ability to play the game with friends has been in high demand for some time. Well now, you can.

With this handy Stardew Valley Co-op guide we will teach you everything you need to know about multiplayer in this chill (but sometimes challenging) game. Build your own farm with up to four friends or have them join your existing save file through local or online co-op, and share the farming fun with your best buddies.

Oh, and if you ended up here while on the search for a Stardew Valley coop guide and are simply looking for a fancy place to store your fine fowl and fearsome dinos, then scroll to the bottom for a bonus guide about how to build and upgrade your own coop.

What are the Stardew Valley Multiplayer restrictions?

Unfortunately, multiplayer in Stardew Valley has a few restrictions. As is standard, if you want to play co-op online, all players need to have a copy of the game, an internet connection, and if necessary, a subscription to the console’s online services – for example, Switch Online for your Nintendo Switch. You cannot have both remote and local players join you at the same time, and, on Switch, split screen is limited to two players who must both have two joycons or a dedicated controller each. Cross platform play is also not supported. But these are pretty basic restrictions, and worth working around so you and your friends can unite and reap the rewards of a joint farm. 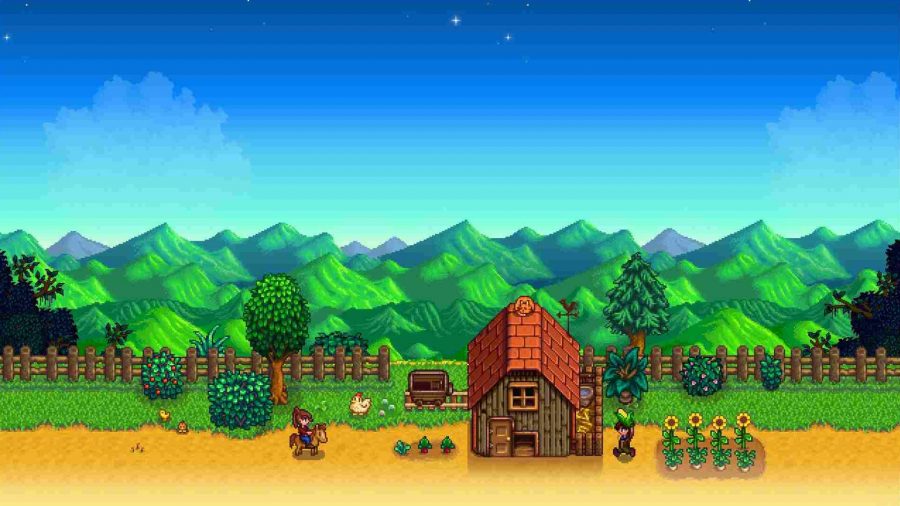 How do I play online co-op in Stardew Valley?

If you want to create a new online multiplayer world, just follow these simple steps.

If you want to have people join an existing farm, you can simply choose to host the world. This will allow the other players to join through your mutual chosen platform. For example, on Switch, players can join remotely through Nintendo Switch Online, by going to the in-game ‘join’ tab.

How do I play split-screen co-op in Stardew Valley?

Here are the steps to start playing Stardew Valley in split-screen co-op.

You can have up to four players on a farm, but are limited to two players in Switch local split-screen co-op. 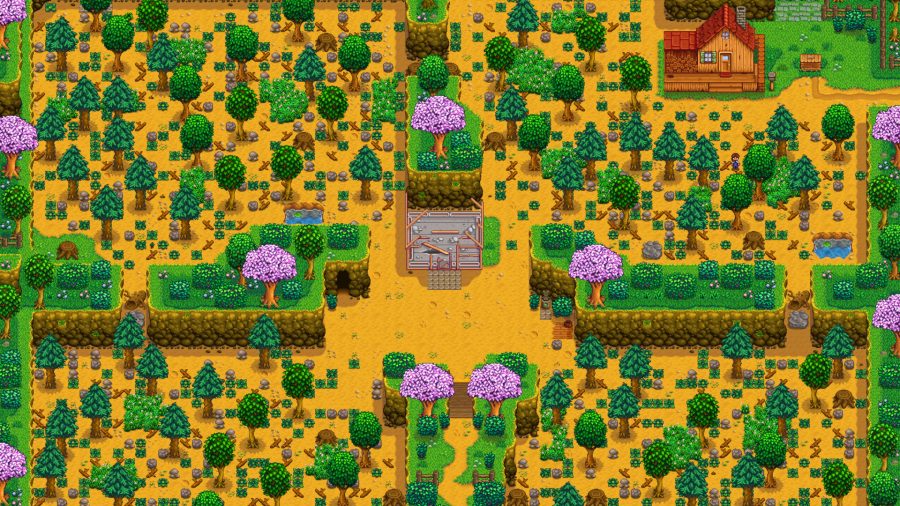 Tips for starting a co-op farm in Stardew Valley

Here are some tips to help you get the best out of your Stardew Valley co-op farm.

Map: the Four Corners map is generally the best to choose for multiple players, as it was specifically designed with multiplayer in mind. Though it can be used in single player mode, the layout consists of four quadrants, perfect to house individual cabins. Each quadrant offers a small pond and an area for perks from other farm maps. The map also has a larger pond, where you can draw water. This presents a much easier layout that will help you separate your grounds and share out responsibilities, while still keeping you close and encouraging you to work together.

Cabins: each farm can have up to three cabins, in addition to the base farmhouse. As mentioned above, every player must have a cabin in order to join. If you don’t start your farm with all three cabins, don’t worry – you can get Robin to build additional cabins for 100g each. Luckily, cabin building is instant, so your friends can join straight away. The host player is the only one with the power to demolish a cabin, which will remove the occupant from the game and put all of their possessions into a chest, situated where the cabin once was. Each cabin can be upgraded by its occupant alone, by using the carpenter’s shop. Upgrading a cabin gives it an identical interior to an upgraded farmhouse, so you and your pals can all live in the lap of luxury.

Profit margins: these are chosen when you create a new game, and reduce the profit you make off specific goods by 25%, 50%, 75%, or you can leave it at the default of 100%. These are intended to balance the economy a little as, naturally, with the extra hands on your farm you are bound to be rolling in the cash. Lowering the profit margin makes it much more difficult to make gold, as well as increasing the purchasing prices for certain items such as seeds, sugar, wheat flour, and rice. As a result, we recommend you keep your skills levelled equally if you want to try this out, which will allow you to work more efficiently and economically, as you are able to craft certain items instead of purchasing them.

Marriage: to ensure there is still some level of immersion, of course, only one player can marry each NPC at a time, so if you all want the same resident to be on your arm, you’ll have to get down on one knee before anyone else. The 14-heart event can also only be completed once per game. So, if a player completes the event then divorces their partner, unfortunately, no one else will be able to repeat it, though they will still be able to marry the NPC. 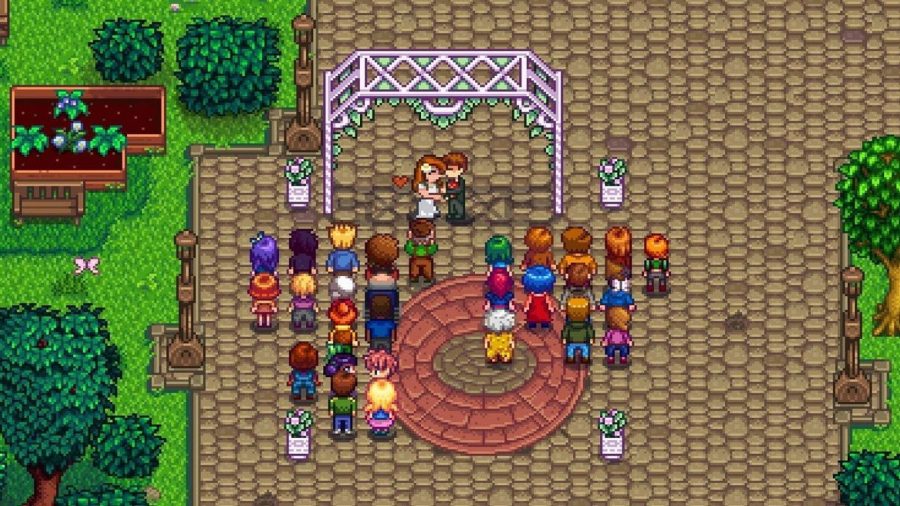 Multiplayer in Stardew Valley is very similar to singleplayer, but has a few extra features and a couple of rules you should probably know before you get to work.

Collaborative decisions: a big part of co-op in Stardew Valley is the focus on collaborative decision making. Through this, certain events rely on the input of all players, such as when to start a festival (by entering the festival area), when to sleep (upon entering a bed), and whether to focus on finishing the Community Centre or buy a Joja membership. Of course, all players share the same farmland, but each player has a separate spouse porch area and mailbox, and can build their own separate cellar. Every player also has their own energy bar, skills, and relationships that they build with NPCs.

Player interactivity: in addition to NPCs, you can also marry each other and have your own children, as long as your house meets the requirements. To propose to another player, you can make your own wedding ring using a recipe purchased from the Traveling Cart. After the wedding, you will receive a stardrop, like the one you would get after marrying an NPC, which will appear in a purple gift box beside your bed. You can also dance with other players during the Flower Dance Festival, and even see each other’s scores during certain festivals.

Money and finances: as mentioned above, money can be shared between all players equally, or split individually through separate purses. This can be set up at the beginning of a new game, or it can be changed in-game through the town ledger in the Mayor’s Manor. Toggling money to be shared during the game will split all money across players equally, regardless of how much or how little you have. If it isn’t shared, you can also use the town ledger to send money to other players.

Game progress and questing: players can help each other during quests, but progress is mostly individual to each player. Quest difficulty is based on the highest-level player, so we highly recommend you and your friends try to keep up with each other, so no one gets left behind. Crafting and upgrading tools also has to be done individually, as does recipe collecting, but nothing is stopping you from lending each other a helping hand.

Experience: each player has their own experience points and bar, and XP is not shared. So, whoever commits the action, gets the experience. Sounds fair, right? Some examples include whoever interacts with the animal or harvests a crop gets the XP, and whoever gets the last swing with a pickaxe or lands the killing blow on a monster snags it. Crab pots are one to watch though, as whoever empties the crab pot gets the XP, even if they aren’t the one who set and baited it. You and your friends also have different daily luck. 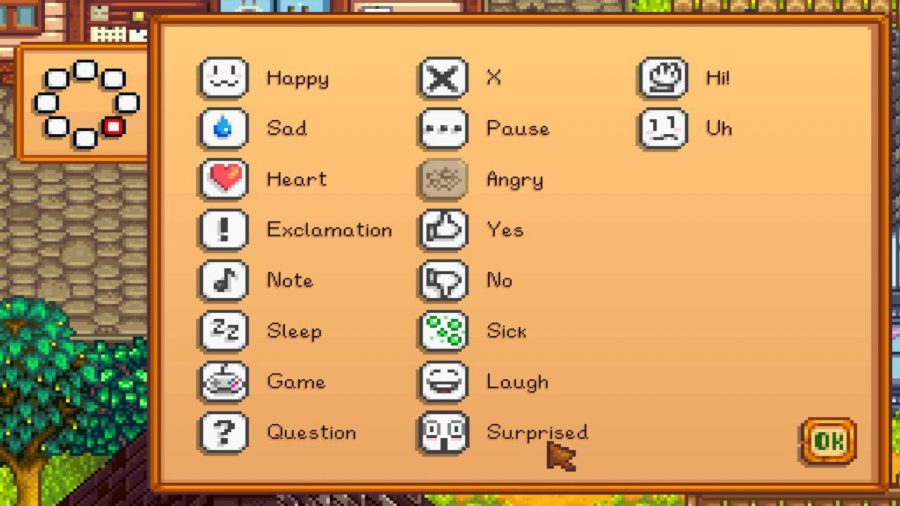 What is multiplayer without a chat? Well, of course, Stardew Valley has one of those. There is a selection of commands that you can run in the chat box, and you can see which ones are available by typing in /help. Some work for all players, whereas others only work for the host. There are also 195 emojis in the game, including the cute little pixelated faces of all your favourite Stardew characters and critters. You can either use these by finding them in the game’s emoji menu, or by going into the chat and typing any number from 1-195 in square brackets (i.e. [80] for a sweet bunny). Finally, there are also emotes, which are little emotions that your character will play out, accompanied by an emoticon in a speech bubble over your head. Emotes can be activated by typing /emote into the chat, or by pressing the emote menu keybind, which will differ depending on which platform you are using. 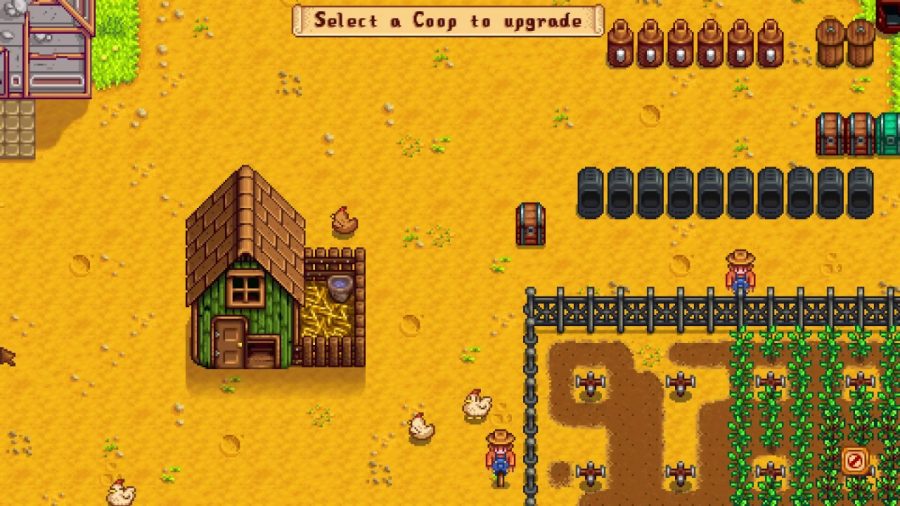 Now for the thing you really came for – the Stardew Valley coop guide. A coop is a type of farm building that you can purchase and upgrade from Robin at the carpenter’s shop. It takes a while to snag yourself a sweet coop – specifically three days for construction, and an additional two days for each of the two upgrades. But it is definitely worth the trouble, as you can house some great critters in it. Coops also have some awesome features that will help you take care of your animals, such as the deluxe coop’s autofeed system that automatically distributes hay from your silos. Here’s everything you need to know about each tier of the coop.

Remember, if your coops doors are closed at night, animals can get stuck outside. This not only makes them a little grumpy the following day (wouldn’t you be?) but it also makes them vulnerable to wild animal attacks – so be wary.

Want to join the fun with your friends, or try your hand at building a fancy, deluxe coop? Then you can head over to Nintendo eShop to grab a copy for Switch, or download the mobile version from GooglePlay or the AppStore, and start your own farm today.