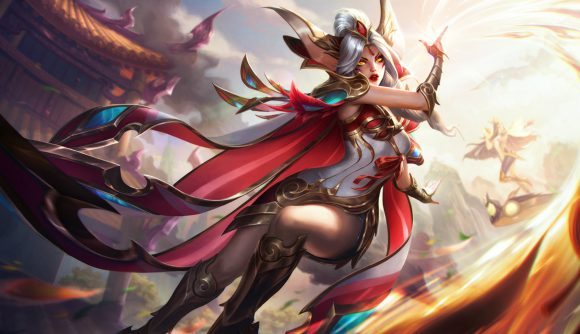 It’s no secret that there’s a huge competitive scene for Riot Games’ library of titles, and this includes the mobile auto chess game, Teamfight Tactics, and thanks to a new post on Reddit, we now know that 47 of the top 50 players all share at least one champion in common. Yes, that means just three of these players don’t use this specific unit.

It turns out that Teamfight Tactics Xayah is a bit of a beast, just look at u/bitey87’s Reddit post, in which you can see the table for the top 50 ranked TFT players in the world, and sure enough, only three of them don’t use this unit. If you’re unfamiliar with TFT’s Xayah, her origin is Ragewing, while her class is Swiftshot, and yes, she can cause all sorts of problems for your opponent.

Due to both her class and origin, Xayah can attack with great speed – for your opponent, it feels as though they have no breathing room with her on the battlefield. Naturally, this means that there’s a price to bring her into play, she’s a four-cost, but she’s clearly worth the trouble.

What other units are popular amongst TFT’s top 50 players?

Besides Xayah, Shyvana appears to be a frequent pick for the top 50 Teamfight Tactics ranked players, as does Yasuo. In fact, if you look at the table, it’s not that uncommon for all three of these units to appear on the same team.

Top 50 global players, all but 3 have one unit in common. from TeamfightTactics

If you’re new to the auto chess title, you should check out our TFT comps guide to discover some of the best builds, as well as our TFT tier list to learn who the best units are. Alternatively, we have a list of the best mobile auto chess games if you’re after something similar yet different to play.