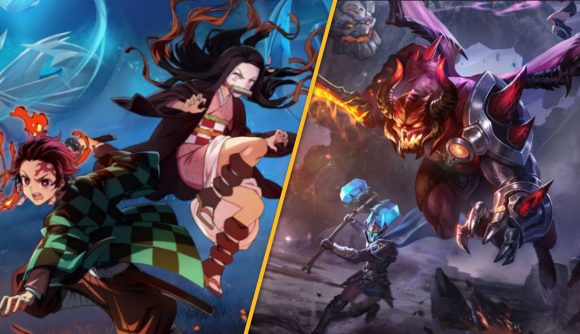 If you happen to be a MOBA fan with a penchant for anime, the upcoming Arena of Valor Demon Slayer collaboration event is sure to interest you. That’s right, as part of the 5v5 fest celebrations, these worlds collide in a way that gives you a range of exciting new content, such as in-game activities, skins, and other rewards.

When the Arena of Valor Demon Slayer event begins, you can equip popular hero Keera with the Nezuko skin (one of the most important characters from the anime and manga). Then, at a later date, Yen can use the Tanjiro skin. For those unfamiliar with Demon Slayer, Tanjiro is the primary protagonist of the entire series.

Furthermore, there’s a range of limited-time in-game activities for you to take part in, and they’re worth doing if you want some more goodies. In essence, you’re on a track, and each time you complete a task, you can roll a dice, which determines how many steps forward you may take. Eventually, after you complete a lap, you get the butterfly mansion girl skin for Alice.

When does the Arena of Valor Demon Slayer collaboration begin?

You can enjoy the event from May 6 until June 1 – more than enough time to grab the new skins.

As far as collaborations go, the Arena of Valor Demon Slayer partnership makes a lot of sense, with the two worlds sharing a sense of kinship as the heroes on both sides are brave individuals that fight for change. Of course, this isn’t the first time an anime IP has popped up in the MOBA, with the Arena of Valor Bleach partnership being just one of them.

If you’re after some similar titles to play, make sure you check out our picks for the best mobile MOBAs and best Anime games on Switch and mobile.