Evelynn is a demonic assassin who uses her special camouflage skills to sneak out of the jungle and take down enemy Champions. She’s a super goth nightmare who likes nothing better than dealing out massive amounts of damage in the most unpleasant ways possible. Her DPS and burst damage are up there with the best.

You’ll use Evelynn as the Jungler on your team, engaging and disengaging with your various abilities and ganking with style and finesse thanks to a passive stealth ability that lets her literally disappear. At a pinch, you can also use her in the Middle Lane or the Baron Lane, if the Jungler role is already taken.

She can be squishy, though, and vulnerable to other, stronger Junglers in the early game. Basically, you’re going to need some advanced tips for Evelynn if you want to help your team eke out a win, which is precisely why we’ve written up this guide!

Yes! It’s packed full of everything you need to know to rule the battlefield as League of Legends: Wild Rift’s Evelynn. So let’s get started! 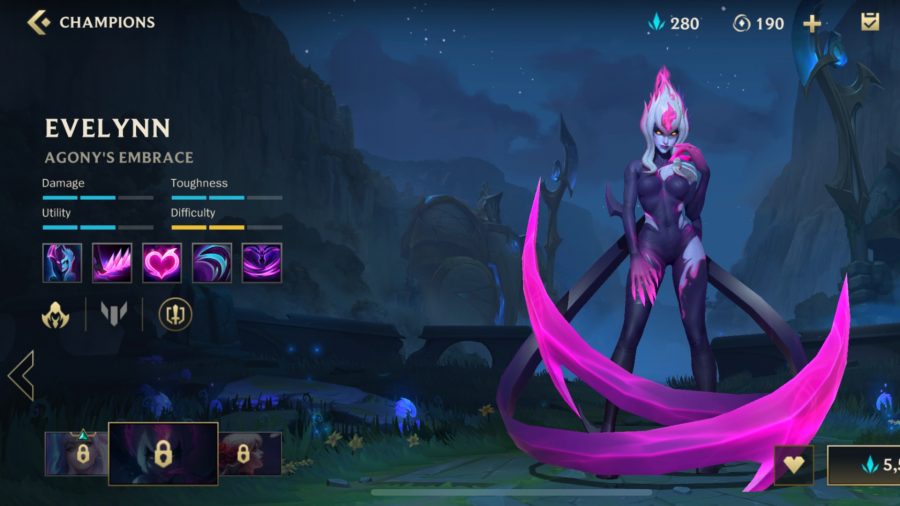 Demon Shade is a double whammy. It grants health regeneration when you’re out of combat, giving you a second chance if fights haven’t gone your way. But from level five, it also gives you camouflage, which lets you get up close and personal without anyone realising you’re there.

What more could you want from an Assassin, really? You need to be careful not to get too close, because you’ll likely get spotted. Know that an exclamation mark appears above your head when this happens.

Hate Spike is a big spike of hate that you fire out in front of you. Pretty cool, right? You can cast it twice before it goes on cooldown, and you can move and attack while you’re casting it. It’s Evelynn’s source of DPS, and you need to get comfortable with using it.

This is a crowd control ability that slows down your target and makes them more vulnerable to magical attack. Its usefulness hinges on how long you charge it – think about the situation before you decide whether to unleash a fully-charged Allure or aim for a lower one.

Whiplash drags you towards the target, dealing damage at the same time. It does more damage when you cast it in Demon Shade, and it increases your movement speed as well. However, the detection range of Demon Shade is slightly longer than the range of Whiplash, so you need to work to get your timing right, or combo it up with Allure to trap your ganking targets.

This is Evelynn’s Ultimate, and it’s a beast if you use it right. It deals a massive amount of damage, and even more to Champions low on health. Learning to use it at the right time can be the difference between nearly winning a trade and getting a super useful kill.

Last Caress also teleports you away, which means you can use it to get away from a fight that you might be in danger of losing.

The Infinity Orb’s Inevitable Demise passive allows Last Caress to do even more damage to Champions below 35% health, turning it into an execution machine. It also boosts magic penetration and movement speed, which should help with ganks.

Equipping this gives you a boost to your AP, or ability power, which will make you even stronger.

These are the fastest boots in the game and will help you with your Allure and Whiplash combo. Add the Stasis Enchantment to protect yourself against burst damage.

Using the Lichbane increases your burst damage capability by adding extra magic damage to your next attack after using an ability.

The Hextech Bolt passive adds bonus damage to your attacks, as well as slowing down your enemy.

This adds a super boost to your magic penetration stat that can really help you out. 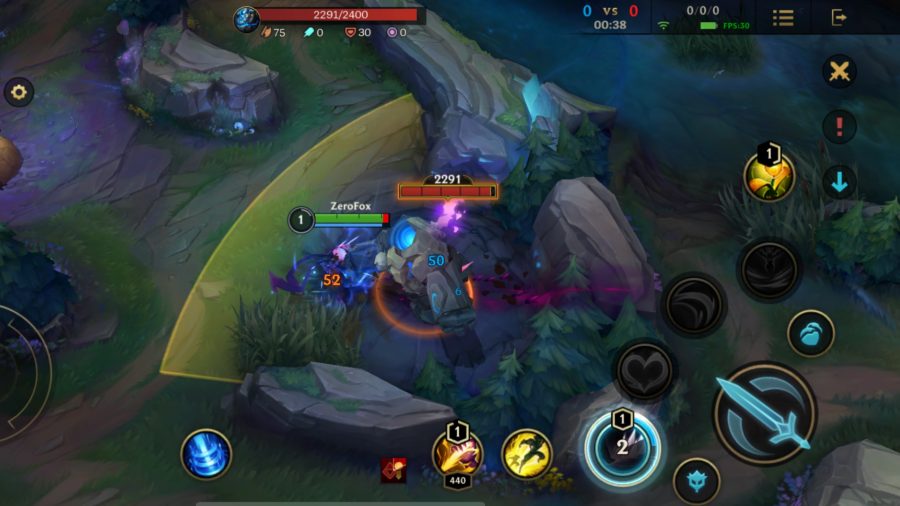 What are the best runes for Evelynn?

Go for Elecrocute if you’re focusing on combos, or Conqueror if you’re aiming for more of a DPS build.

This gives you bonus AP and magic penetration, both of which are super important to Evelynn.

You’ll get more HP with this rune, as well as gaining protection against being slowed down. Basically, you’ll be super nippy.

Because Evelynn is a Jungler, you should always pick up Pathfinder to help you move faster through the terrain.

What are the best spells for Evelynn?

If you’re taking on the Jungler role then you definitely need to take Smite. If you’re fulfilling a different role on the team, however, consider Ignite instead.

Comboing Flash with your ultimate can get you in and out of dangerous situations in some pretty impressive ways.

And that’s all we have for you this time around! If you’re searching high and low for the best character builds, you really outta check out our Wild Rift Lee Sin, Wild Rift Wukong, Wild Rift Malphite, and Wild Rift Darius guides. We’ve also got a League of Legends: Wild Rift tier list if you wish to see where your favourite champion ranks.