Lucian, the Purifier, is coming to League of Legends: Wild Rift as part of the 2.3 patch. As a Sentinel of Light, Lucian is tasked with hunting and killing undying spirits. His hatred and personal path of vengeance began after his wife was slaughtered by the wraith known as Thresh. Fans of the popular MOBA will know that his wife does return, and she herself will also appear in Wild Rift.

The marksman wields two relic pistols, which you can use to deal damage at a distance. He also has a range of abilities, all of which allow him to rain hell on his opponents at range. A precise release date is as yet unknown for League of Legends: Wild Rift Lucian, but given that patch 2.3 is now here, it would be fair to assume that he will arrive in the coming weeks.

For this guide, we will speculate on his abilities and what items you may need to get the most out of him. Given that he is a marksman, we will focus this guide on having Lucian in the Duo Lane. The name of the area should tell you that you will not be facing enemies alone in this area, so Lucian will have a comrade in the support role.

What are Lucian’s abilities?

A passive ability that causes Lucian to perform a double shot for any attack that follows the use of an ability. Oh, and Lightslinger also comes in handy for reducing the cooldown period of another skill.

The clue is in the name for this one. Lucian shoots a bolt of Piercing Light at his opponent, tearing right through them. It can prove useful when trying to reach a champion that is being protected by minions.

If you use Ardent Blaze, Lucian will shoot a missile that explodes in the shape of a star, marking all those that get caught in its crossfire. It can also briefly reveal nearby enemies. Moreover, your champion will experience a temporary boost to his movement speed when he attacks marked enemies.

The ultimate attack. Lucian will fire a barrage of bullets from his pistols, causing damage that can  spread between multiple foes. Use this ability wisely and you really could cull the herd. 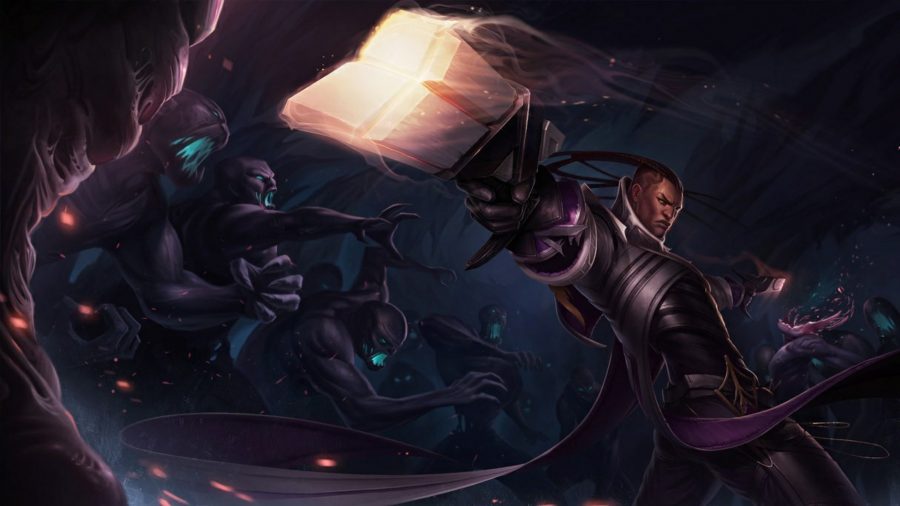 Let’s speed things up a bit. When activated, this item will increase your movement speed for a limited time. As for its passive benefits, you will also get a permanent increase to movement speed, ability haste, and a reduced cooldown for spells.

Gain both a boost to attack damage and critical damage – two vital components to gaining victory as a marksman.

Again, let’s speed things up but, this time, we will increase how quickly we can launch an assault on the enemy. Runaan’s Hurricane will give you a hefty increase to attack speed and up your chances of landing a critical hit.

You must be ready when entering battle. Getting the first hit will most certainly increase your chances of victory. Therefore, we recommend using Trinity Force, as it will up your attack speed, haste, and damage. Oh, and it gives a boost to health, too, which is always nice.

The Hextech Gunblade will give Lucian both an increase to his attack damage and ability power. It also has several passive abilities attached, one of which is lifedrain, while the other is Hextech Bolt. One gives you health and the other will further damage your opponent.

There is no reason to not have Guardian Angel equipped. To be honest, this item will appear in the majority of our Wild Rift guides, and with good reason. It not only offers you a boost to armour and attack, but it also gives you a second chance at life with its resurrection capabilities.

What are the best runes for Lucian?

Hitting an enemy champion three times in a matter of seconds will give you a movement boost and make you more resistant to slow effects. It could come in handy when traversing the battlefield and lining up those perfect shots.

As a marksman, you need to deal damage when in the duo lane. Your friend is there in a supportive role, so being able to deal a world of pain is going to come in handy. Basically, Champion increases the damage you cause to opposing champions.

You need health. That is a fact, and Adaptive Carapace provides you with bonus health while also increasing your defence when you drop to below 50%.

You are rarely alone in the duo lane. You will always have a fellow champion nearby, so why not adopt a pack mentality? As the match progresses, you may even find yourself with more than one friend at your side, especially in the later stages. Pack Hunter increases your movement speed while near ally champions, and you’ll both receive bonus gold for taking down an enemy together.

What are the best spells for Lucian?

At this point, it should come as no surprise when Flash appears on a League of Legends: Wild Rift guide. Speed is key as a marksman, as you want to line up your shots and keep your distance. So using this spell will enable you to retreat or launch an attack as quickly as, well, a flash.

Damage. Lots of damage. Ignite can help Lucian finish off the competition. It wreaks havoc on those who are hit with it. Not only will this decimate your opponent’s health, but they will also receive grievous wounds and have their healing capabilities hindered.

There you have it! That is our guide for Lucian’s build in the Duo Lane. However, he is not the only champion included in the 2.3 patch. In fact, two have already arrived. Check out our Wild Rift Irelia build and Wild Rift Riven build to see what these fighters have to offer. Alternatively, we have also compiled a League of Legends: Wild Rift tier list to help you decide which champion may best suit your playstyle.