So you’ve opted to play Marvel Future Revolution‘s Star Lord? That’s pretty bold. As far as heroes go, he’s not the strongest – at least at first. Star Lord really doesn’t come into his own until very late in the game, when he gains access to his regional set and absolutely annihilates. We’ll go into the reasons for that later in this guide.

Don’t despair at choosing him though. With the right Marvel Future Revolution Star Lord build, you can be an absolute damage powerhouse. He’s the ultimate in risk/reward gameplay, capable of putting out crazy high critical damage with alarming regularity. He’s pretty squishy though, but mitigates that somewhat with a high dodge rate.

As a nice companion to this guide, we strongly recommend checking out TonyBingGaming‘s Marvel Future Revolution guide series over on YouTube. It’s terrific, and offers a lot of value for those planning on taking this game seriously. Make sure to like and subscribe to show TonyBingGaming some love. 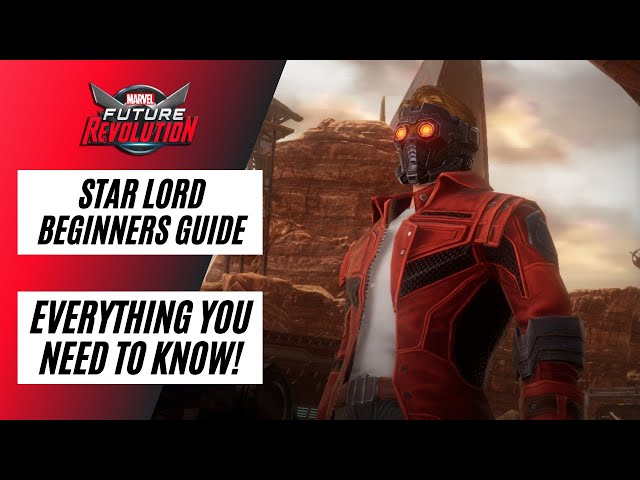 Star Lord is, in many ways, much easier to build for than other classes due to the nature of his elemental, or ‘Type’, attacks. Basically, if you’re playing PVE, you go with ‘Flame’ and if you’re in PVP, you go with ‘Chill’.

As such, here are our recommendations for Star Lord skills below: 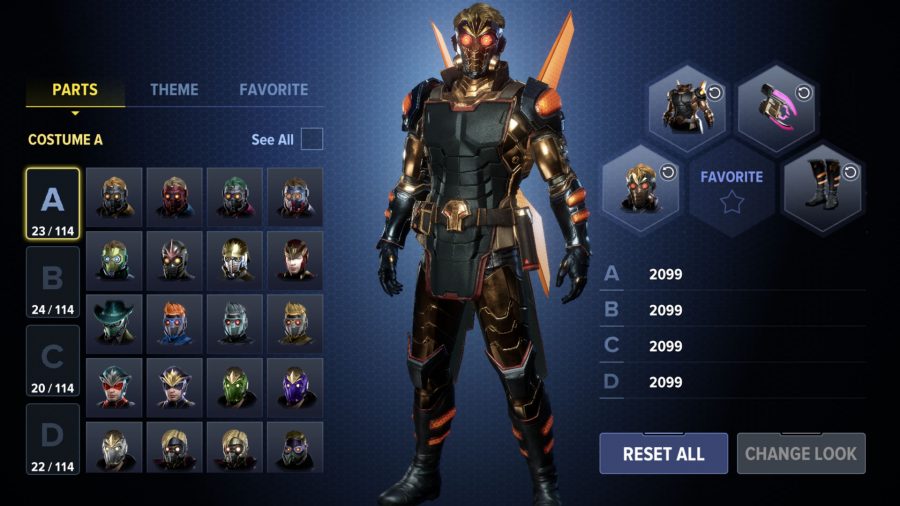 Again, we split our outfit recommendations into two – one for PVE and one for PVP:

While levelling, we use the Secret Wars set as it provides a nice boost to our ‘Battle Soundtrack’ ability, which is where we see a huge chunk of our damage come from.

As soon as we can though, we get the Sakaar outfit, which boosts four of our five PVE skills, given that they’re ‘Flame Shot’ abilities. It’s ridiculously powerful.

For PVP, it’s an easy choice: we go for Midgardia, as it boosts our ‘Chill Shot’ abilities.

While the upside of a regional outfit for Star Lord is an insane boost to many of his skills, the downside is that you’re going to need to grind two sets if you want to experience both PVE and PVP. That’s going to take some doing. 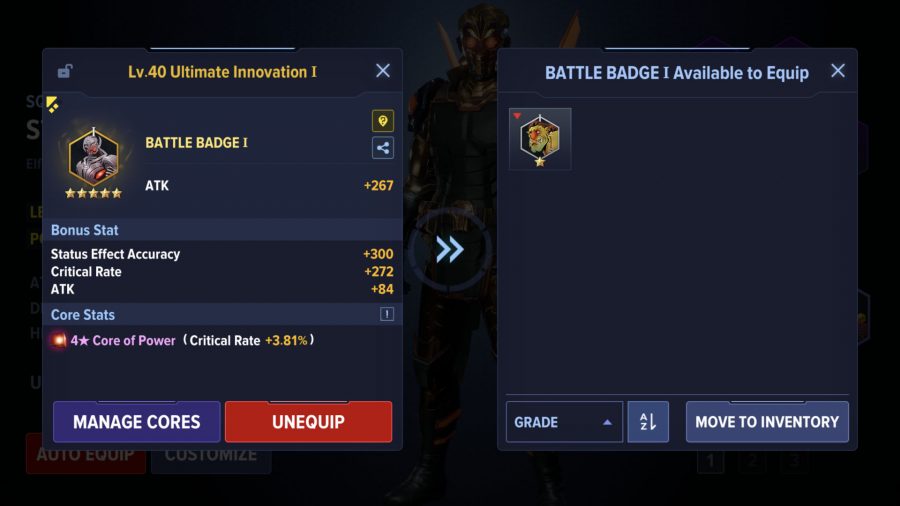 While levelling, just use the best badges you gather but as soon as you get to level 100, we recommend picking up the Blitz set for Maestro initially, which will give you a serious damage boost against bosses.

Then, you can start farming your endgame badge set. We’d recommend the following:

Lord of the Desert gives you a flat attack boost, and is the best option to go for. Daughter of Thanos provides more defence pierce, and is a decent alternative, while Lord of Jotunheim improves your hit rate.

Omega War is the defacto PVP badge set as it gives you flat damage increase in PVP. Towering Tyrant is a decent alternative though – particularly for those that prefer a less squishy Star Lord. We’d still argue that it’s better to rely on his inherently decent dodge rate though, and boost damage instead. 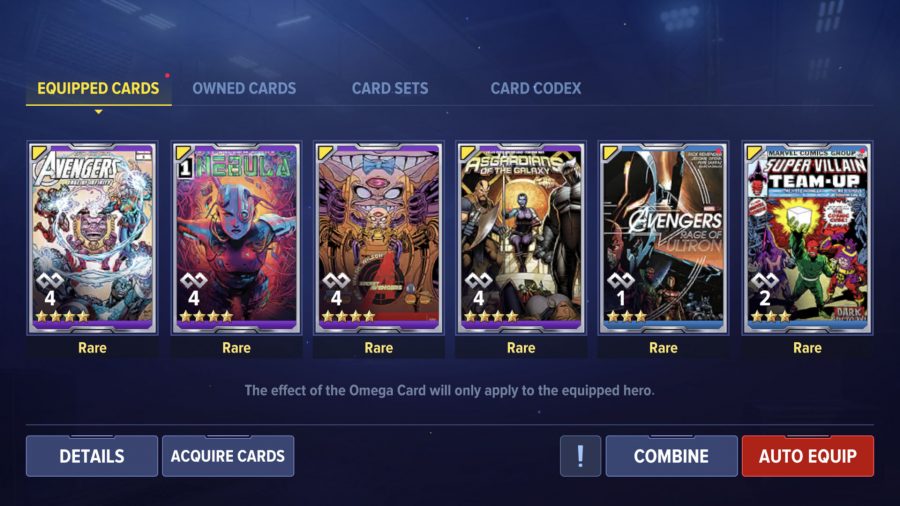 Our Omega Card recommendations are all going to be for F2P options, as opposed to those you can buy in the cash shop, as the amount of money you could feasibly spend to unlock them is a bit ridiculous.

Fortunately, Star Lord has some amazing options for F2P sets. Here’s what we recommend:

We recommend grabbing the full Midgardia set, which gives you an enormous boost to CRIT DMG, which is an area in which Star Lord already excels. You also get a slight boost in CRIT RATE, which helps boost your Pump It Up! ability, and an increase in all of your core stats, including ATK, DEF, and HP. It’s a terrific set.

We then recommend getting the two set bonus for Xandearth, which boosts Star Lord’s stamina recovery. You’re going to need as much stamina as possible, as Star Lord is a pretty spammy character generally. Alternatively, Hydra Empire #2 and Dark Zone #3 give you a flat attack boost.

Feel free to swap these sets around so you get the four set bonus from Xandearth, as an alternative. This gives you faster access to your ultimate ability, as well as increased damage to PVE opponents. This might be more important to you than slightly increased crit rate. 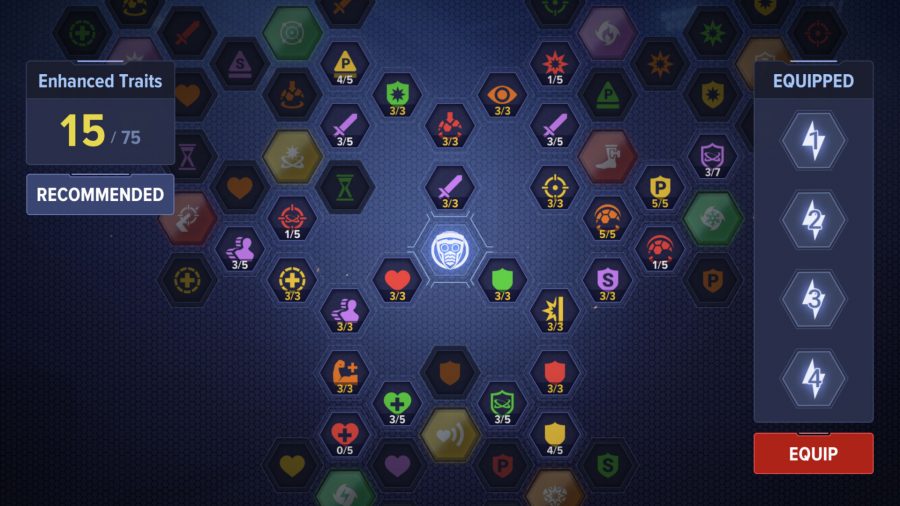 Star Lord has a number of excellent specialisations, so it can be tricky to pin down the talents that will work best for you. We’ll recommend our favourites below, split up by PVE and PVP.

Given that you can only equip four of these at a time, you’re going to have to be selective. We recommend Grand Finale as a staple in all builds, as it offers a terrific flat DPS bonus whenever targets are below 50% HP. This is a monster against bosses.

After that, it becomes a little more nuanced. If you’re AFK grinding, we’d recommend Tolerance Decrease, for its 15% flat type damage bonus, Special Flame Bullet, for a DMG boost to your flame shot skills every eight seconds, and Stable Breath, which increases your debut accuracy and accuracy by 25% when your HP is 50% or higher. This will ensure you land those debuffs that are vital to your DPS more often.

If you’re playing actively, Jet Boots Modification can give offer a serious damage boost every six seconds, while Rapidfire Spray can help you maintain Pump It Up! more often.

Again, you’ve got a lot of options for PVP, but there are more staple abilities that we’d recommend. Grand Finale should really be on all builds, as it gives you a serious DPS boost, but PVPers should always use Painful Wound, to drastically improve your chances of stacking chill, as well as Stable Breath and Certain Victory. The former increases rebuff and regular accuracy, while the latter increases guard damage by 30%, which will help you break enemy guard more often.

Jet Boots Modification is an interesting option that might pay off in Dimensional Duel, offering you an enormous DPS boost every six seconds, while Special Chill Bullet might be a better option for Omega War against grouped enemies. It deals 22.5% of your ATK every second for five seconds when you use a chill shot skill. That’s not too shabby. 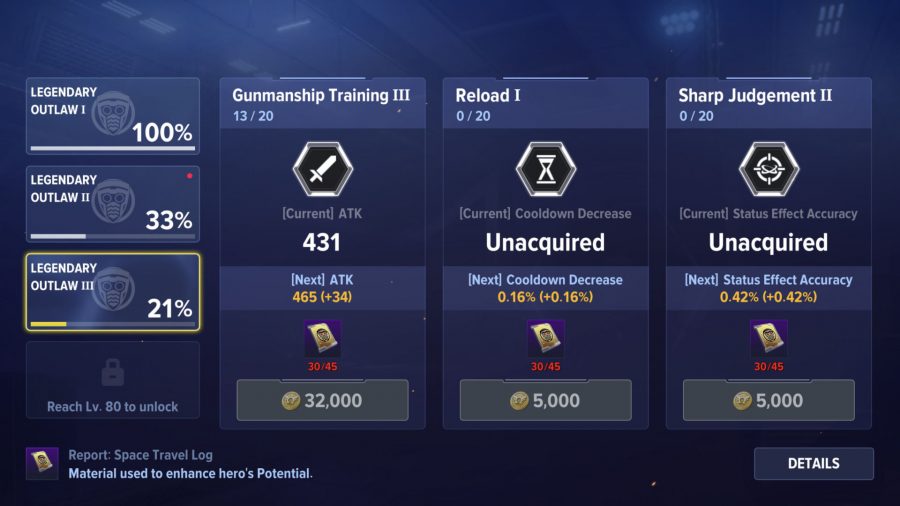 Star Lord’s potential options are very straightforward. As with all characters, we want to max out Legendary Outlaw I, for an ATK, DEF, and HP bonus. After that, we want to boost these:

Following this, you’re going to want to split your focus depending on whether you’re a PVE or PVP main.

While PVP should grab:

Ideally, everyone should get all of the above, but those are the potentials you should focus on initially, depending on the mode you play.

Right, let’s tie everything together in two handle tables:

And that will do for our Marvel Future Revolution Star Lord build. If you fancy sticking around, we’ve got a bunch of other content to suit you, including a best mobile MMORPGs list, a best mobile multiplayer games list, and a list of the best gacha games.