The world is at stake. Actually, an infinite number of earths are on the line as the multiverse is under attack, and it’s up to you to save it. Marvel Future Revolution throws you in at the deep end – if you want the title of hero, you must earn it. No stopping a bank robbery and claiming glory. It’s go hard or go home. However, this is a big ask for one person, and that’s why there are multiple Marvel Future Revolution heroes.

Our Marvel Future Revolution Black Widow guide aims to provide you with all her details, including her best build, omega cards, battle badges, skills, potential, and specialisations. Oh, and we also discuss her outfits because we can all appreciate a good Black Widow suit – though this spy-der looks good in anything.

First things first, you don’t have access to specialisations until a character reaches level 70, so we hope you’re ready to commit yourself and be one hero kinda person, for a time at least. Once they’re all at level 70, you do you.

Overall, you can select four specialisations across three different categories:

However, you can only equip four specialisations at a time, as YouTuber TonyBingGaming points out. We recommend giving his Black Widow video a watch to get a full beginners introduction to the Russian spy.

As for which ones you should choose, we recommend:

This is great for one on one scenarios, or for if you’re looking to remove a particular enemy from the battlefield quickly. Custom attacks grant you a 21% increase in damage to a single target by 21%.

Staying in line with the destroy all enemies thing Black Widow has going on, the receiving intel specialisation allows you to deal an extra 25% damage to all enemies that are at 50% health or lower.

Black Widow packs a vicious bite, and subdue is proof of that as it provides her with a 30% increase in damage against debuffed or immobile enemies.

This specialisation allows you to use Black Widow’s skills more often by decreasing the remaining cooldown time for skills by two seconds when using an espionage device skill – more on those in a bit.

If you happen to have an interest in PvP, you might want to consider the sharp mind specialisation. Swap it with whichever of the above features you think is the weakest for the Black Widow build you have going.

If you happen to be more of a pew pew person rather than smack smack, you might want to consider fatal strike, as it increases your critical damage with firearms by 50%. 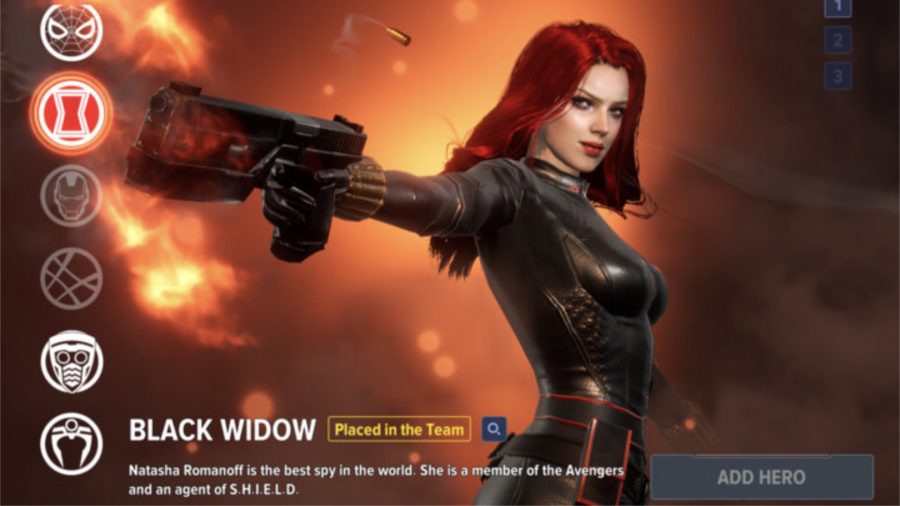 Much like the rest of the cast, Natasha has 32 skills to choose from across multiple classes, including espionage devices, close-quarters combat, and deadly aim. All three of these speak for themselves, with the first revolving around gadgets, the second giving a left to the knee and a right to the ankle, while the last involves firearms.

We recommend covering each base, at least until you determine whether or not you prefer throwing punches and kicks, or striking from afar. However, no matter what, espionage skills should feature in your build.

Natasha Romanov is a deadly spy, having been trained in the red room, she’s well rounded and proficient in pretty much everything. Of course, this includes martial arts, and this skill sees you causing damage by getting up close and personal – not that many would complain about getting smacked in the face by Black Widow.

Overall, you can equip five skills, and trust us when we say Black Widow has many good abilities in her arsenal. While we’ll provide our recommendations, bear in mind that we like an aggressive approach.

In contrast to the previous skill, this sees Romanov take on her enemies from afar, namely through the use of a sniper rifle – upon mastering the talent – that can penetrate multiple enemies. This widow has a serious bite.

If there’s one thing that spiders know how to do, it’s lay a trap, and Black Widow is no different. This is an espionage skill that sees you toss a trap full of poison, dealing decent damage to your foes.

Get over here! Natasha is giving some serious Scorpion vibes with this skill, as she fires a wire that goes through the enemy, only to pull them towards her. There’s just one thing left to do, FINISH HIM!

Another close-quarters combat skill – because we love invading our enemy’s personal space – trained assassin not only deals damage through the action itself, but also debuffs your foe and deals high voltage damage.

Another skill that involves throwing some strikes, master spy is great for anyone that wants to embrace an aggressive Black Widow.

We recognise that our approach may not be for everyone, and if you happen to prefer a build that utilises more range, well, we recommend the following skill.

This move deals a massive amount of damage, firing Widow’s blasters to the front of her multiple times.

Of course, all the above recommendations are subjective, but for us, we prefer to be in on the action, letting our fists do the talking.

When it comes to PvP, all of the above skills are suitable, but your chances of winning increase by committing to either close combat or range – espionage is thrown in for good measure.

What are the best Marvel Future Revolution Black Widow outfits?

We can all agree that there are some amazing costumes in the Marvel universe, with each hero having an entire wardrobe full of suits. So, it’s unsurprising that you have quite a large selection of outfits for Black Widow in Marvel Future Revolution.

Now then, there are currently 18 outfits for Romanov. As tempting as it may be to go for aesthetics, costumes play a pivotal role in Marvel Future Revolution, as they provide key stats that may increase attributes such as attack, health, and critical rate.

We have two outfit recommendations for you:

Battle badges are yet another piece of equipment that aids you in creating the most powerful hero that you can. There are several to choose from. Some have a focus on health, others on dealing damage. Let’s say right away that if you’re after a good battle badge for PvP, you should use the omega war battle badge.

However, for any other game mode, we suggest equipping Black Widow with the lord of the desert battle badge, an item that provides a nice boost to attack damage – making an already deadly assassin even more dangerous. 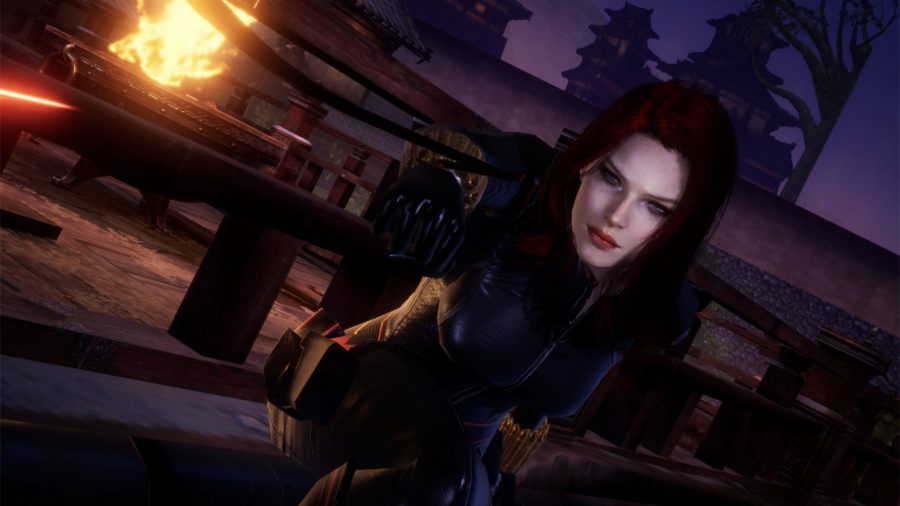 Like all Marvel Future Revolution heroes, Black Widow has four different potential categories for you to unlock, and fortunately, you don’t have to pick between them. As long as you have the necessary materials, you can select any stat boost regardless of which ones are already active.

Overall, there are four different sets featuring a range of stat boosts that provide benefits such as an increase to attack, defence, health, critical rate, and critical damage.

What are the best omega cards for Marvel Future Revolution’s Black Widow?

Omega cards are a vital part of the Marvel Future Revolution experience, selecting the right set could make all the difference when facing villains. As with real-life card games, your chances of victory come down to your entire hand, not just one card.

There are many sets to choose from, all of which need at least two cards to be partially complete. For Black Widow, we suggest using the following sets.

There’s no right way to play Marvel Future Revolution, and that’s the beauty of it. You can do this hero business your way. However, that doesn’t mean we don’t have suggestions on how to make an already deadly Black Widow that bit more venomous.