The superhero-infused tactical card-battler, Marvel Snap, is packed full of your favourite characters taken from the comic pages, and placed into your deck. But, with only six turns in each game, and smaller sets than other card-driven tactical titles, it can be difficult to figure out how to build a Marvel Snap deck, and which one it should be.

That’s where we come in, with our Marvel Snap decks guide, full of capable combos from Captain America, Black Widow, Iron Man, and the gang. As in all card games, the composition of your deck is crucial to how competitive your matches are going to be, as well as your playstyle, so we’ve made sure to include some options for card game newbies, as well as a couple of more complicated builds for those confident in the genre.

If you want to get your hands on this comic card game sooner rather than later, check out our Marvel Snap download guide if you live in the Philippines, or keep up to the date with the as-of-yet unannounced global Marvel Snap release date. Or, if you’re looking to save the world in some other way, take a browse through our picks of the best My Hero Academia games.

As there’s not much of a Marvel Snap meta pre-launch, it’s hard to guess what key card combinations are going to pop up when the final game arrives. However, like with most card games, a meta will establish itself pretty quickly, and when it does, you can be sure we’ll update this section to include the top-tier Marvel Snap decks.

What we can do for now is suggest some fun sets to try out to learn the mechanics behind Marvel’s card game, and themed decks might be the best way to do that. Below we’ve got a six-part selection of themed decks with cards taken from the Marvel Snap catalogue, as well as a little explanation for each. 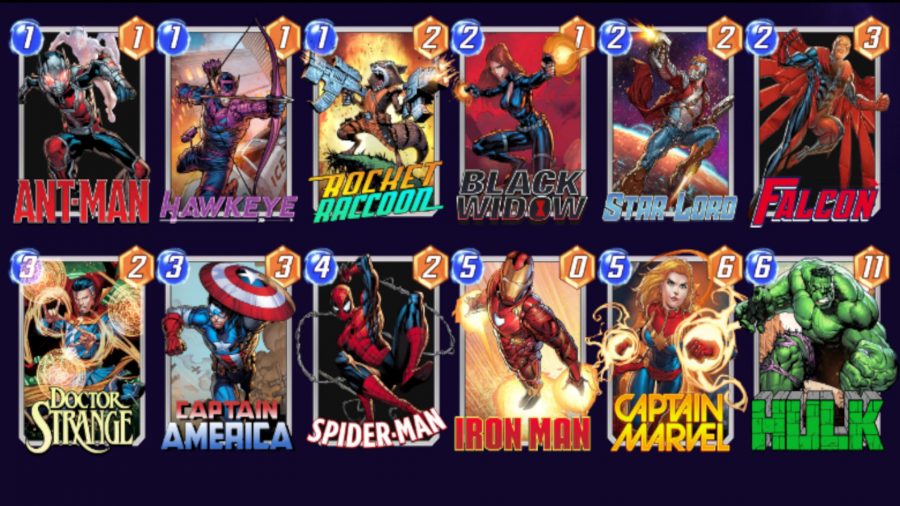 Featuring the greatest heroes the earth has to offer, this Avengers set is another good one to start with due to its mixed power pool. With a win condition thanks to Captain Marvel’s effect, raw firepower in the shape of the Hulk, and the potent effects of lower-ranked cards like Falcon, Doctor Strange, and Ant-Man, there’s enough to experiment with for your first few games using this set. 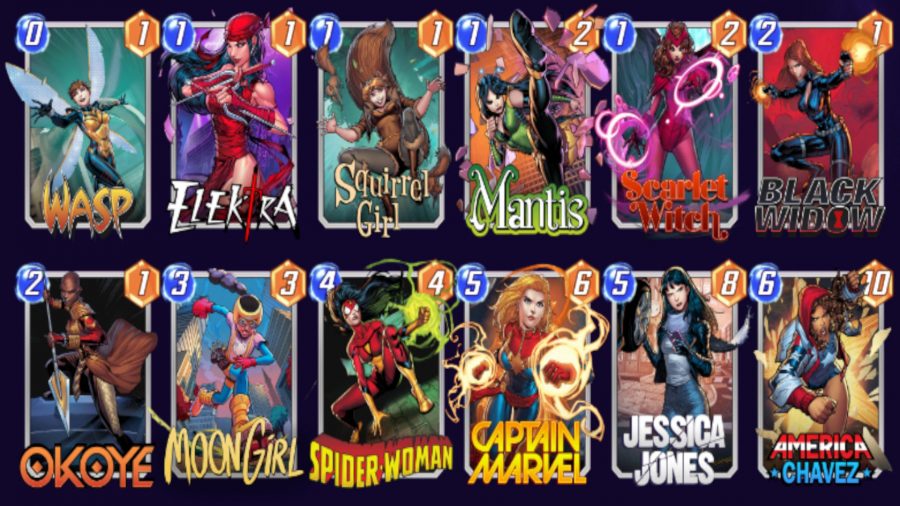 Relive that classic Avengers: Endgame moment and gather the good women of the Marvel universe in one deck. With star and staple card Captain Marvel capable of winning games almost on her own due to her powerful effect, reliable disruption from Scarlet Witch, Black Widow, and Electra, and a pretty safe backup plan in America Chavez, this is a balanced set that is perfect for beginners. 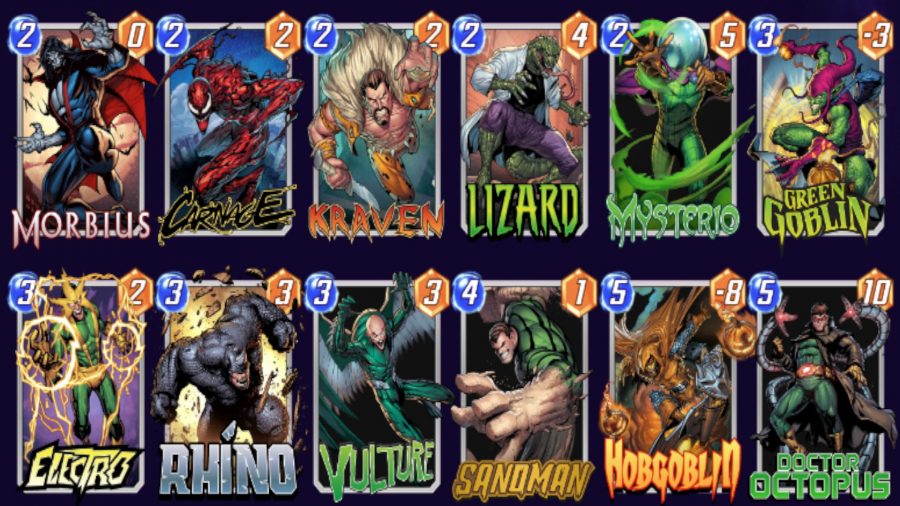 If there’s one thing Marvel Snap isn’t short on it’s Spiderman’s villains. You can find almost the entirety of the anti-Spidey rouge’s gallery throughout the catalogue, making it possible to create a full set united in their dislike for the web-slinger. Just like the most recent Spiderman film, in this deck Doctor Octopus is the star of the show, while you can also rely on Sandman, Electro, and the Green Goblin to upset your opponent’s locations. 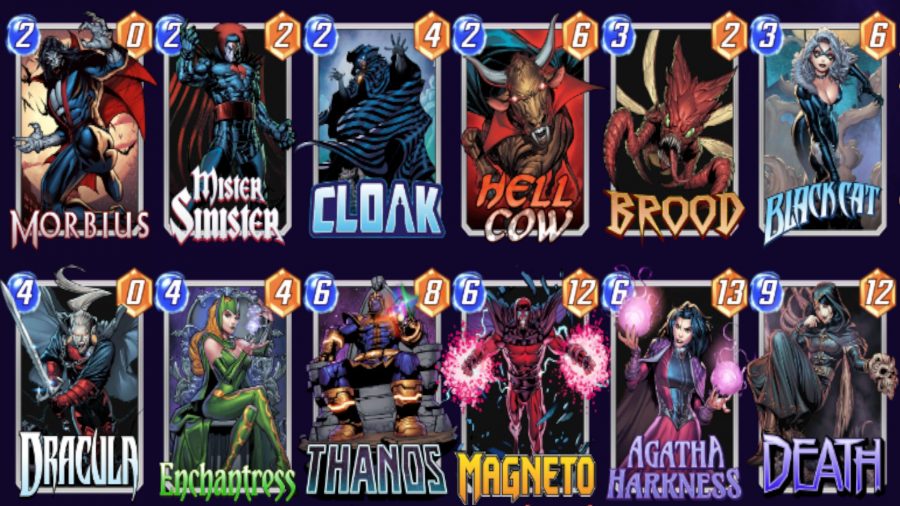 If you prefer to side with the villains, here’s an Agatha and Death-orientated deck that brings true evil, and incredible power, to the forefront. Agatha decks always start with Agatha in the hand, and she plays for you, which might sound strange, but her AI is potent enough to take down human players, and it’s a good way of learning better techniques for other sets. 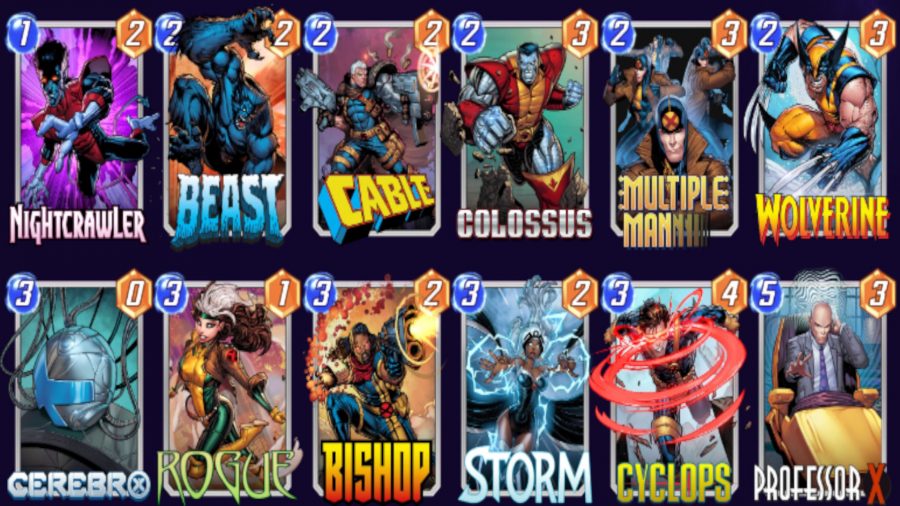 Bringing together the X-Men of all generations, this set has the lowest power ranking of all on this list, but does include some useful combos. Bishop’s powering up for each card played effect is complimented further by Cerebro, while Storm and Professor X can synergise to lock your opponents out of locations within two turns. It should be noted that this deck is slightly more complex than others on this list, so use it with caution. 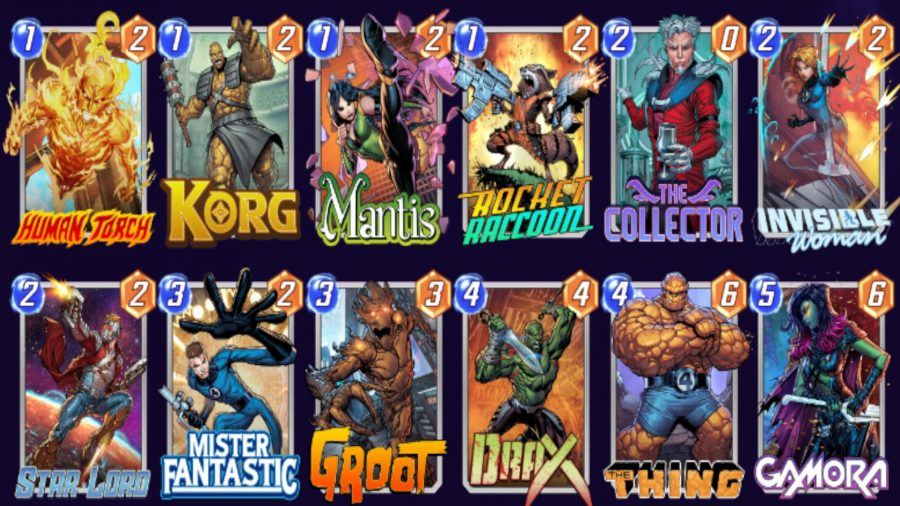 Fantastic Four and the Guardians of the Galaxy

Earth’s finest superhero family meet the self-selected saviours of the universe in this crossover set that includes all the big-hitters from each group. While the Guardians all have effects that benefit from your opponent’s moves, each of the Fantastic Four has a helpful disruption effect, especially the Invisible Woman’s ability to hide played cards from your opponent.

There you have it, our recommendations for the best Marvel Snap decks to play on launch. While you’re here, why not check out our picks for the best mobile card games, and see what other deck-builders are available.