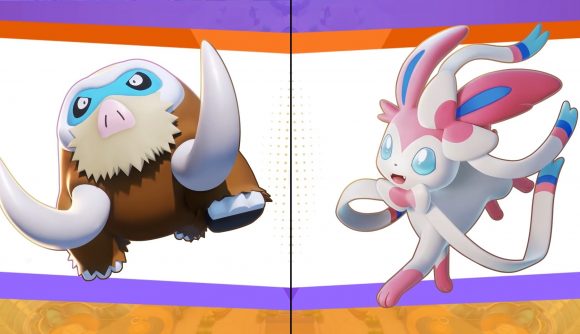 While some fan favourites like Charizard, Pikachu, and Gengar all made it in, there are some questionable picks like lesser-known Pokémon Crustle or Cramorant. Luckily they’re all viable in certain ways, so you’re not ever likely to pick a complete dud. Stick to our guides however to make sure you pick the right Pokémon for your playstyle.

The good news is, there are already more Pokémon in the pipeline, with a steady stream of new pocket monsters promised alongside each new season. As announced on the Pokémon Unite Twitter, and already seen in the beta, Blastoise is coming at some point to the roster. The huge water cannon tortoise will be a defender. Meanwhile, psychic/grass type Gardevoir has already been released in one of the game’s first major updates, serving as an attacker.

During the Pokémon Presents stream on August 18, we learned that Mamoswine and Sylveon will soon arrive in Pokémon Unite. Unfortunately, we don’t know the exact release dates just yet.

Sylveon and Mamoswine make their appearance! Stay tuned for more details on when they'll show up on the shores of Aeos Island! #PokemonUNITE pic.twitter.com/JmPqSvruRd

We’re not sure who’s next, but Blastoise should eventually make its way over. Considering the bottomless well of worthy candidates and the success of Pokémon Unite so far, it’s likely there will be a long list of additions as the game grows over the coming years.

Blastoise, Gardevoir, and other Pokémon also can’t wait to join you on Aeos Island!

They won’t be battle-ready at launch, so stay tuned for more details on when they’ll arrive following the release of #PokemonUNITE on Nintendo Switch! pic.twitter.com/05szCFP3pK