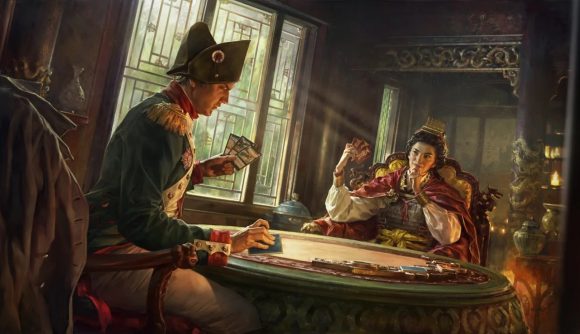 Creative Assembly has revealed gameplay footage for its card-battler, Total War: Elysium. The famed developer of the Total War series announced the game last year, at the same time as a partnership with NetEase, a prominent network and game services provider in China. The partnership is part of Creative Assembly’s plan to expand into the Chinese market.

Total War: Elysium is a historical deck builder, drawing famous generals and iconic figures into card-based battle. The game takes place in Elysium, a Civ-esque city drawing together the greatest military leaders from throughout history. We’ve seen some of these generals already, including Sun Ren and Cao Cao from the Three Kingdoms period, but others we haven’t seen before. One general wears what appears to be French regency dress, and another clad in furs and armour, could potentially be Boudica. All the heroes  have individual abilities to give them a unique battle advantage.

Creative Assembly also announced a closed beta test for Elysium to go alongside the new reveal, which you can sign up for on the Total War: Elysium website. We don’t currently know when the beta will take place.

However, the trailer gives us an initial look at how the card-battler might play.

Elysium is the first Total War game made for mobile since Total War Battles: Kingdom, a free-to-play town builder and RTS strategy game. What we’ve seen so far fits with the expectations of a deck builder, but what they do with the number and variety of generals is another matter. Could this be a Total War gacha? Who knows.

But sign up for the beta, and you’ll see for yourself. If you’re looking also for other deck builders on mobile, be sure to check out our list of the best mobile card games.