There are two questions on every Genshin Impact player’s lips right now: what is the Mimi Tomo event, and what are the Hillichurl trying to tell me? Well, we’re here to provide answers to your questions and even give you some handy Hillichurl translations to help you on your journey.

The Genshin Impact Mimi Tomo event began on May 27 and ends on June 8, right before Mihoyo rolls out Genshin Impact update 1.6. In order to participate, you must be at least adventure rank level 20, then after speaking to Katheryne at the adventurer’s guild in Mondstadt, you must go on a Hillichurl hunt.

If you’re new to the wondrous world of Teyvat, you may be curious as to who the best Genshin Impact character is, or you may need some Genshin Impact codes to pick up a few extra primogems. For the seasoned players out there, we recommend checking out our Genshin Impact Kazuha and Genshin Impact Tohma guides.

How do I start the Genshin Impact Mimi Tomo event?

To begin the Genshin Impact Mimi Tomo event, you must first speak to Katheryne at the adventurer’s guild in Mondstadt. Once she has given you the low down on the Hillichurl situation, she will send you off to a Statue of the Seven.

When you arrive, you will see some Hilichurls attacking a child called Ella Musk. Once you have defeated them, the Mimi Tomo event challenges will appear in the event menu. 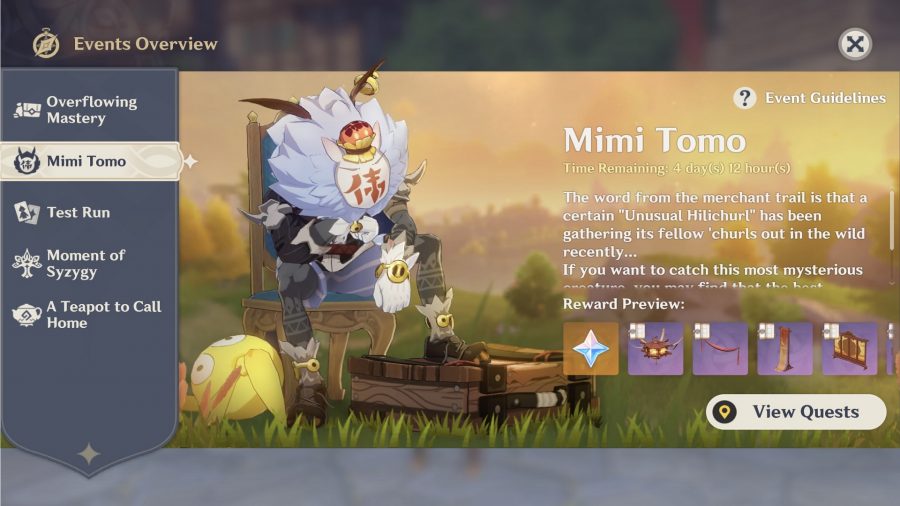 Where do I find the unusual Hillichurl location?

You can find and kill the unusual Hillichurl seven times during the event. He’s fairly easy to track down each day – simply open the event menu, click on the Hilichurl sighting, then investigate. You will then find an area highlighted on the map, so venture over there and speak to the friendly Hilichurls.

It’s worth noting that some of the Hillichurl will attempt to fight you, so be prepared for combat. The friendly Hillichurl will let you in on the location of the unusual Hillichurl once you have completed a request for them.

How do I translate the unusual Hillichurl?

If you have managed to track down a Hillichurl but have no idea what it’s saying, you will need to consult the Handy Handbook of Hilichurlian. For those of you who still can’t work it out, here are some translations that may help.

What are the Genshin Impact Mimi Tomo event rewards?

Along with primogems and mora, You can also pick up the following Liyue-themed furniture blueprints to decorate your Genshin Impact serenitea pot.

Once you have completed the event, you can find out exactly who will appear in the next Genshin Impact banner right here on Pocket Tactics.