What’s been exciting about the Pokémon Switch games is the variety. There are remakes that bring new mechanics to classic games, two very different fighting games, returns to iconic spin-offs of the past, and explorations into new genres and game styles.

It’s fair to say that these games make up some of the best Switch RPGs, but even the non-RPG games here have been very well made and deserve a spot in your library. If you’re new to the series, the games on the Switch actually span most of the series history, making it rather a good console to own if you’re a new fan who wants to catch up.

Anyway, these are all of the Pokémon games on Nintendo Switch, starting with the most recent: 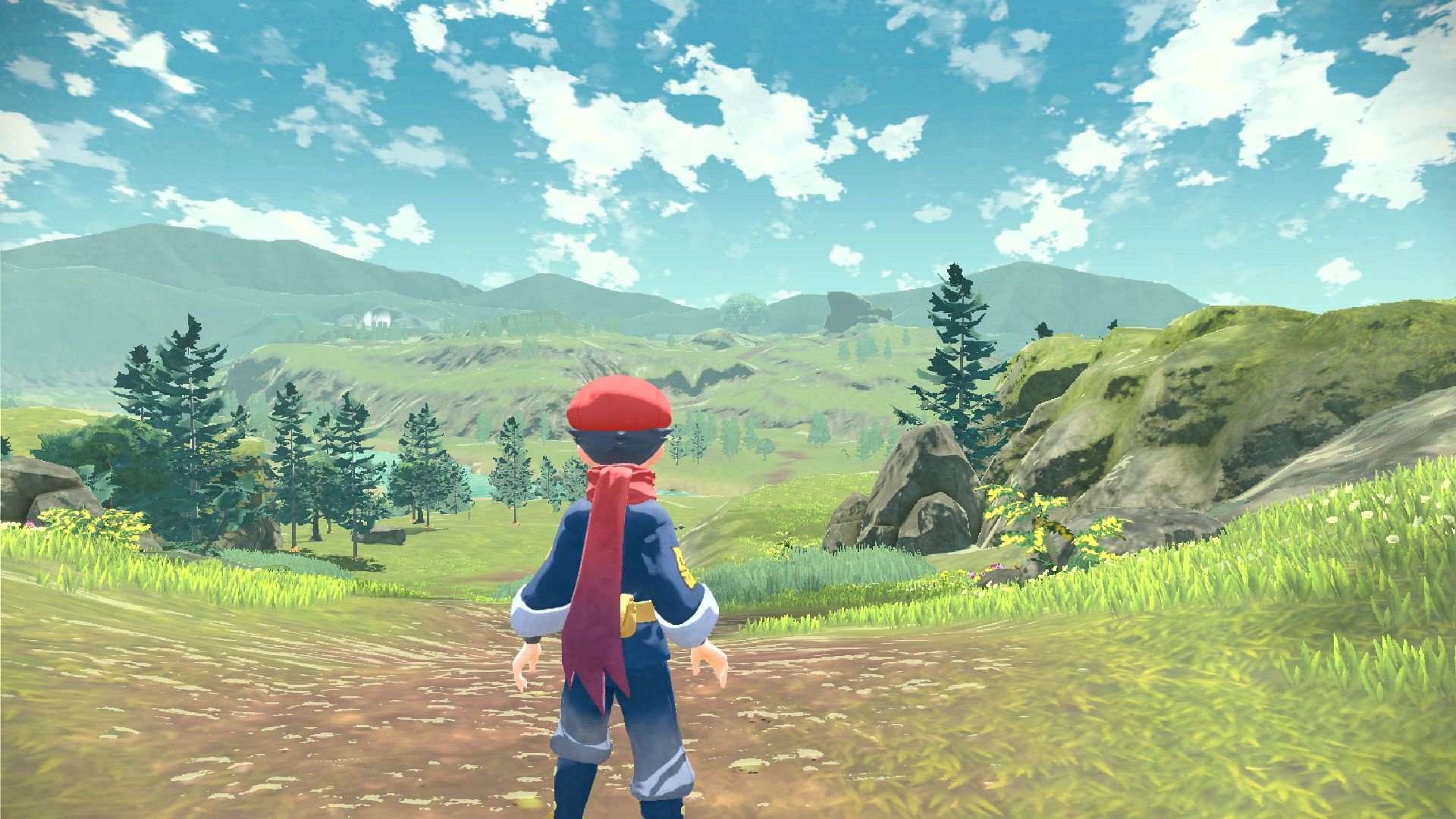 Returning to the Sinnoh region that many fans will have been introduced to via Brilliant Diamond and Shining Pearl, Pokémon Legends: Arceus reinvents the Pokémon wheel, as it were. For the first time, players are given a huge open world to explore, with Pokémon that can be caught without initiating a battle and battles that start seamlessly within the overworld.

While the latest game on the Switch is a real delight, there are still plenty of other fantastic Pokémon Switch games. 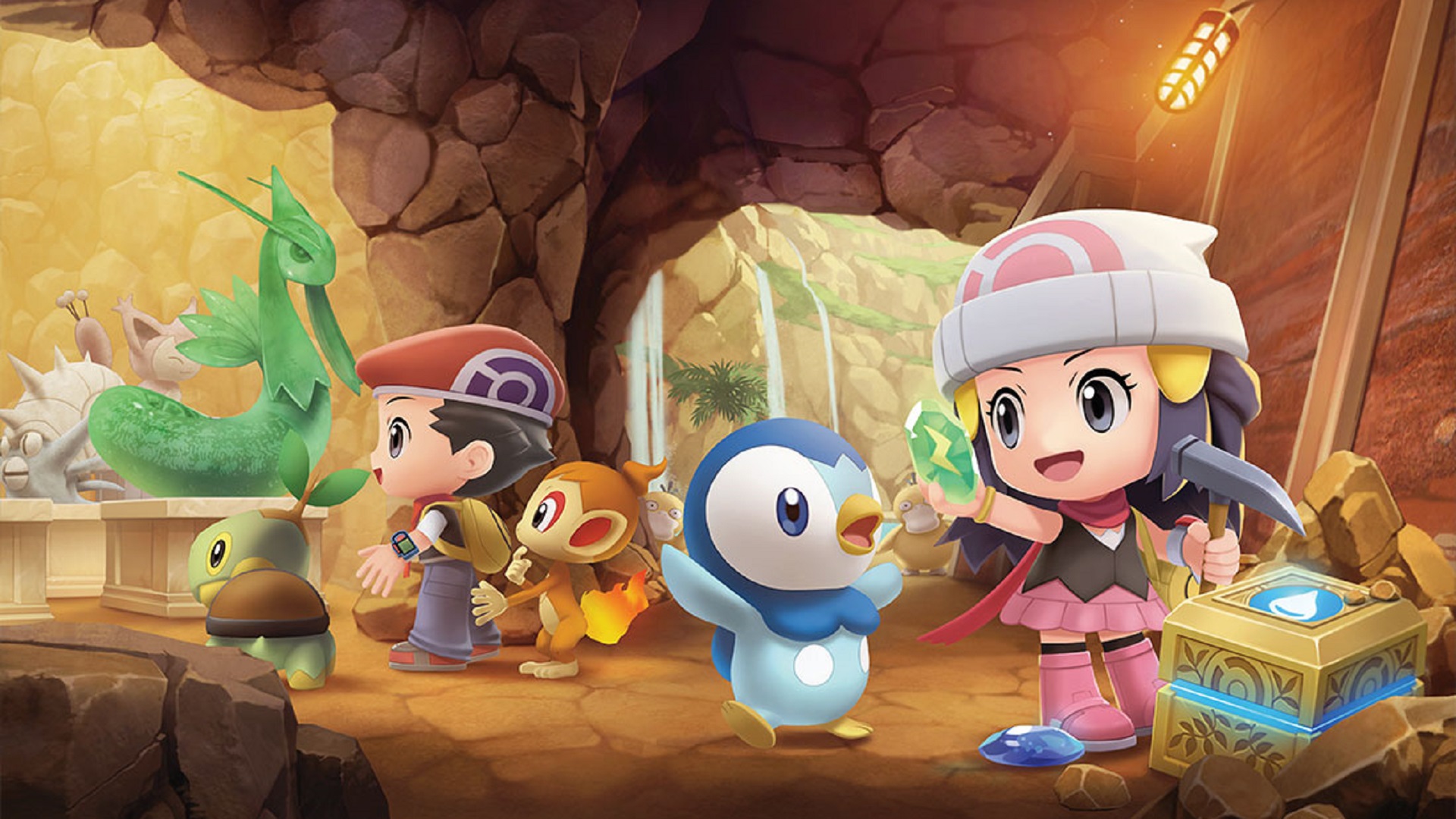 Ever since Omega Ruby and Alpha Sapphire were released on the 3DS in 2014, fans hoped that the original DS classics, Diamond and Pearl, would one day receive the same treatment as well. If you’re a Switch owner who’s looking for a more traditional Pokémon experience, then Brilliant Diamond and Shining Pearl may be right up your alley.

Set in the mysterious Sinnoh region, one of the biggest strengths of these games is that they feature a large amount of side quests and endgame content. Once you’ve defeated the Elite Four, there remains a long list of things for you to do. It’s easy to sink a lot of hours into this game, so even if you played the originals, the remakes are well worth a look. 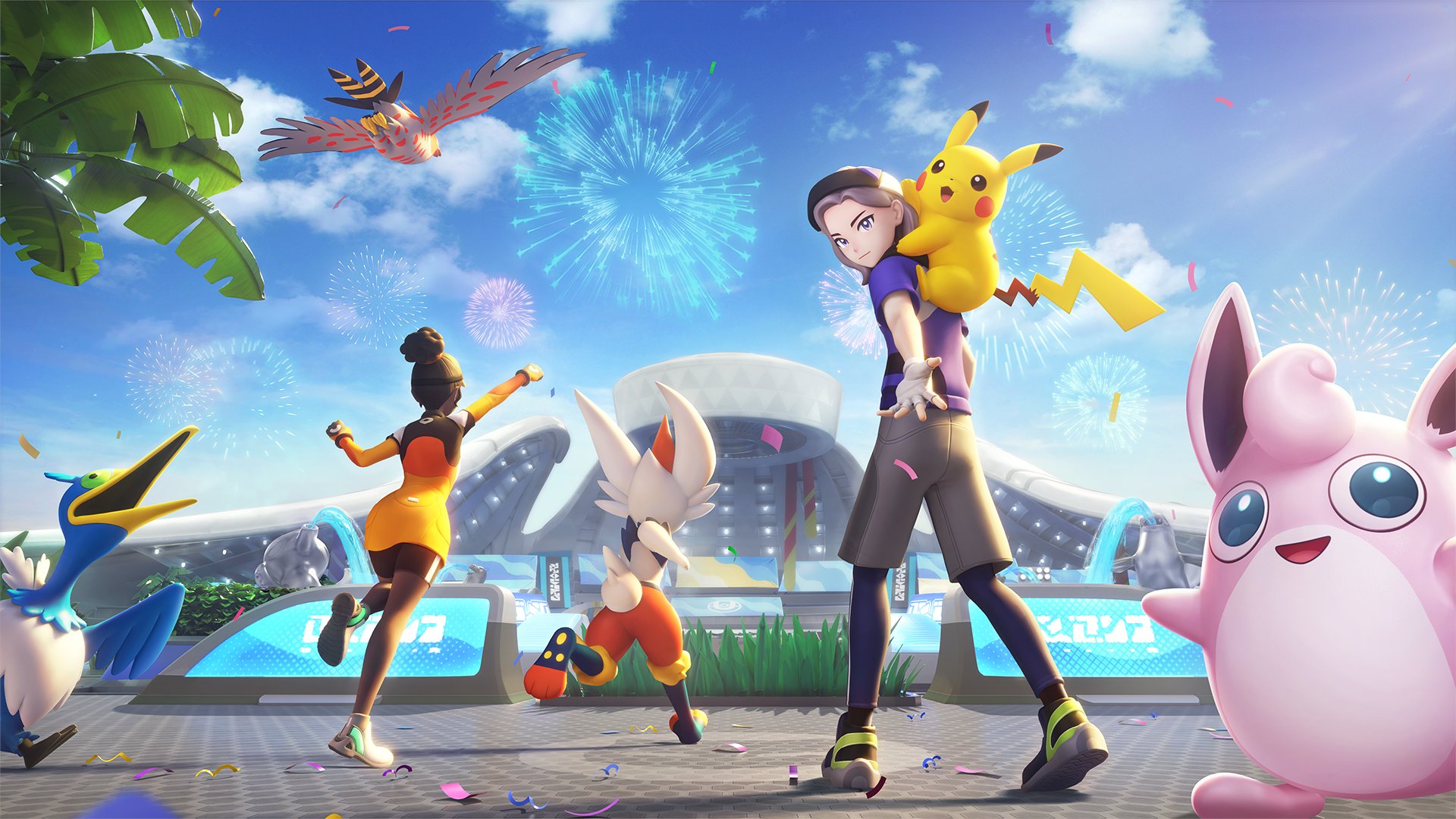 Ever wanted to play a Pokémon MOBA? Well, good news, because that’s exactly what Pokémon UNITE is. Don’t worry if you’ve never played a MOBA game before, because Pokémon UNITE has very much been designed to accommodate those who are unfamiliar with the genre.

This is another freemium game, so if you’re curious, there’s no reason not to give it a go. Here, you work in a team alongside four other players, and your goal is to defeat wild Pokémon that appear within a stadium, while a competing team works to do the same. There are 30 playable Pokémon to choose from and each can be equipped with three held items, which modify their strengths and abilities. Have a look at our Pokémon UNITE tier list to find out more about its roster. 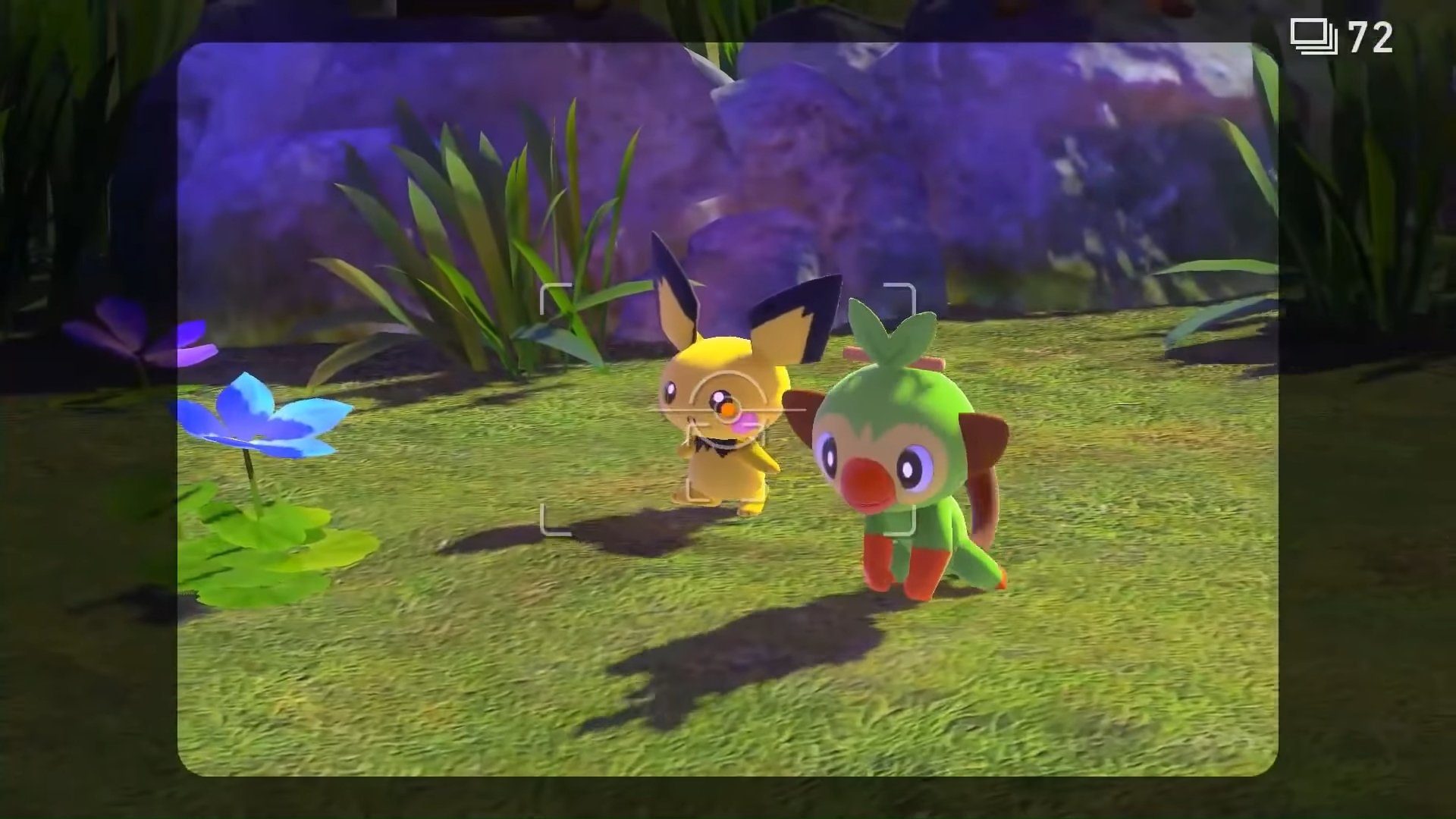 1999’s Pokémon Snap was a game for which many fans had a huge soft spot, but by 2020, it didn’t look likely that it was going to get any kind of sequel. Then to fans’ delight, out of nowhere, New Pokémon Snap was announced.

New Pokémon Snap has a slightly different focus from other Pokémon games. Instead of trying to “catch ‘em all”, or pit each of your roster against irritating NPCs who pop up and demand you thrash their low-level Caterpie, this time, you’re trying to take their photographs. You ride inside a vehicle called the NEO-ONE which takes you through various Pokémon habitats. NEO-ONE drives itself and it’s up to you to capture photographs and do what you can to entice the Pokémon out of the overgrowth and into the best possible shots. It’s an addictive formula, and one with a surprising amount of nuance. 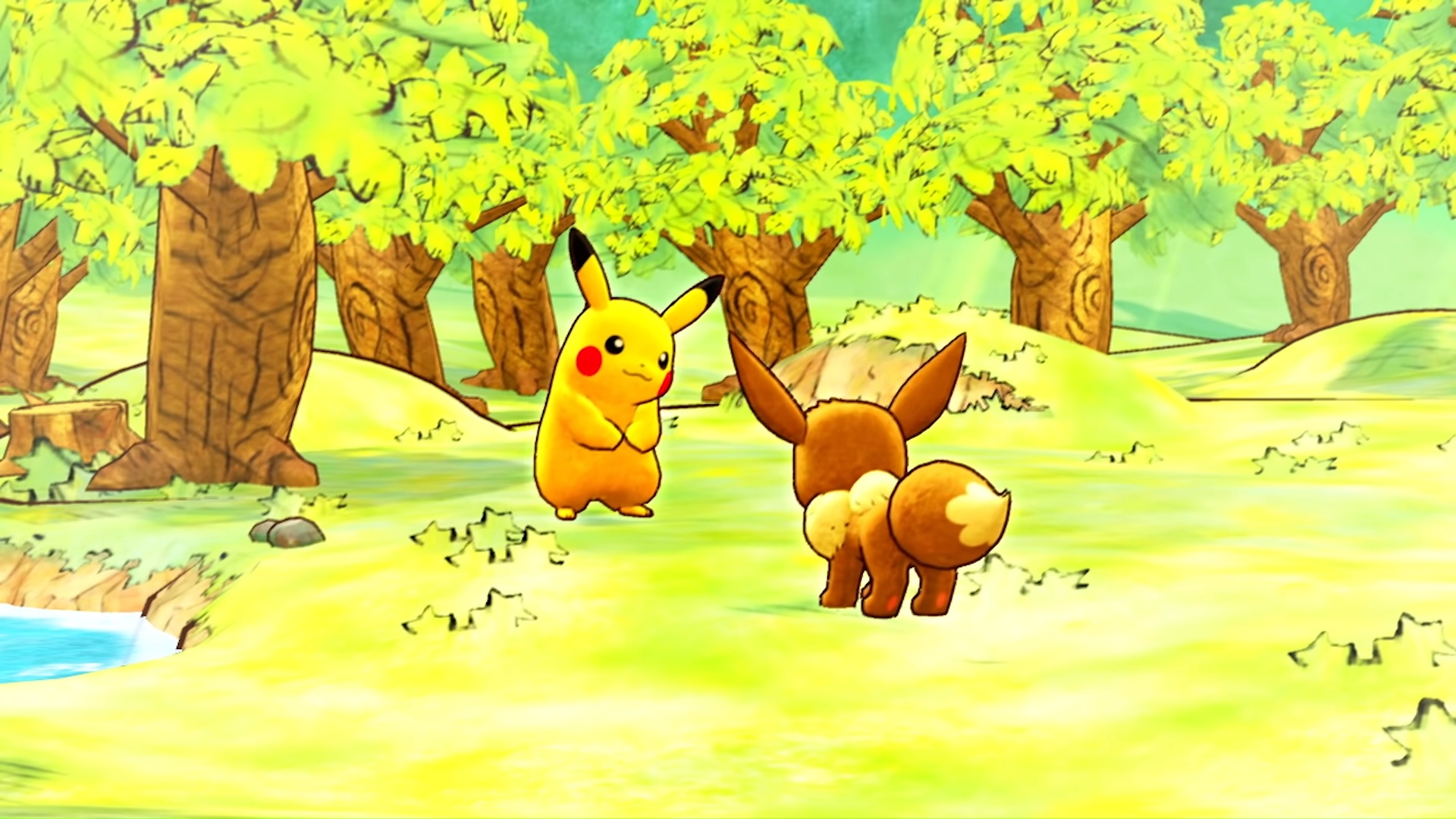 This remake gave new fans the chance to experience a Game Boy Advance game that they might not even have been around to play at the time of the original release. This isn’t a simple remaster either, but a full remake. Not only does it include gameplay mechanics that were introduced in later instalments in the series, but it also adds a whole bunch of new stuff as well. 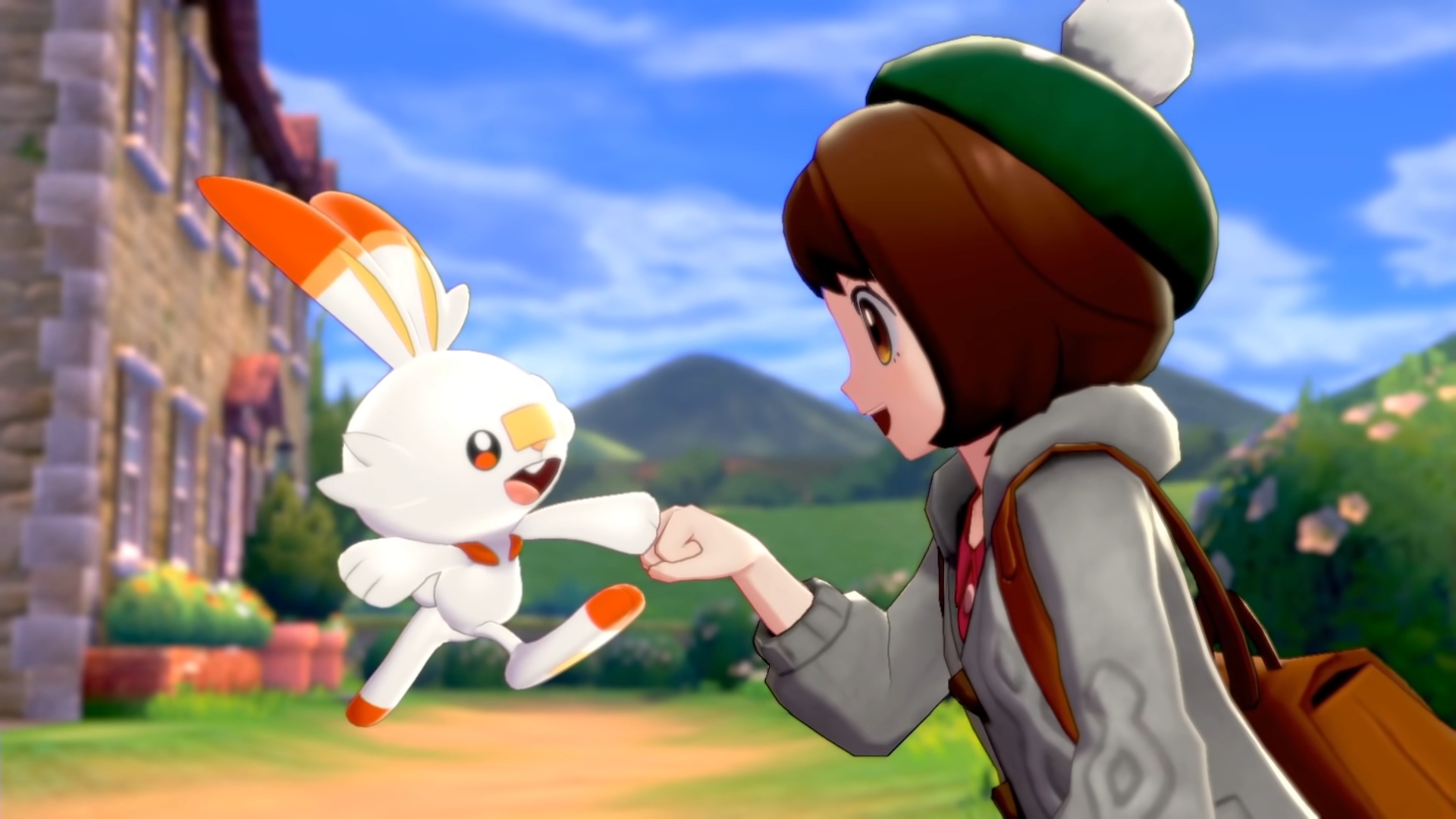 This was the first main entry in the Pokémon series to be released on a Nintendo home console, making it a significant milestone in the history of the series. It takes place in a new region called Galar, which is based on the UK, and introduces Dynamaxing to Pokémon battles, allowing them to grow to enormous sizes under certain conditions.

While it maintained the traditional turn-based battles that much of the series uses, it also added something called the Wild Area. This is a large portion of the map, where, for the first time, players are completely free to go wherever they want and adjust the camera as they explore this expansive wilderness. If you buy the game’s DLC packs, this concept is taken even further, with a whole island that can be explored in the same way as the Wild Area. A taste of what was to come in Pokémon Legends: Arceus, perhaps… 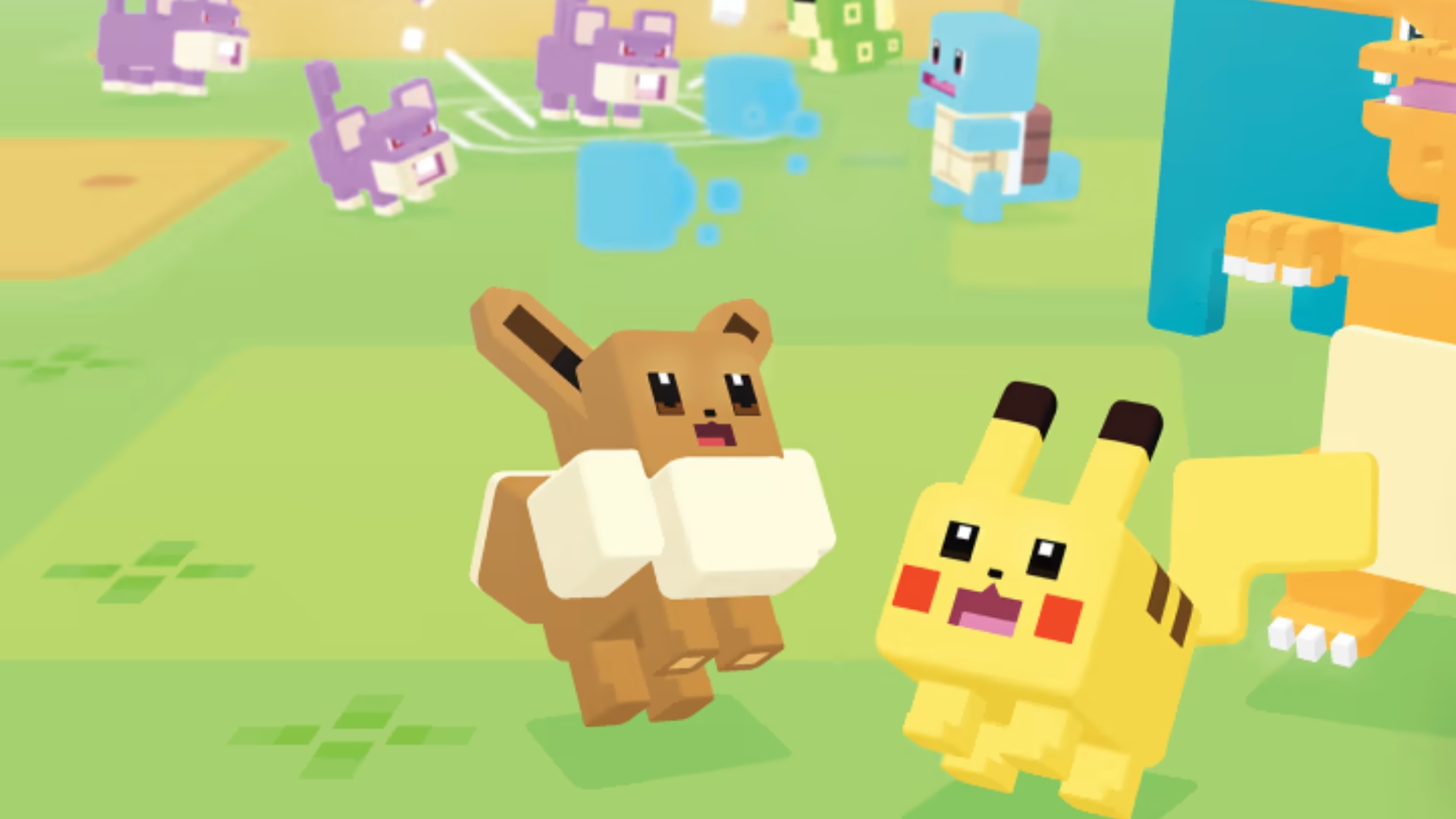 A freemium game that was released on Nintendo Switch, iOS and Android, Pokémon Quest stands out from other titles in the series due to its use of a drastically different artstyle. Here, every Pokémon looks like it would be more at home in Minecraft, with blocky avatars that still capture the cute Pokémon style we know and love.

Pokémon Quest is a game that’s all about arranging the right team of Pokémon to go on quests and defeat opponents. The combat itself is very simple, with a greater focus being placed on tweaking the Pokémon in order to have them meet the right specifications to win a battle. As with most free-to-play games, it involves a lot of grinding, but there’s no denying that Pokémon Quest can be fun and (and addictive). 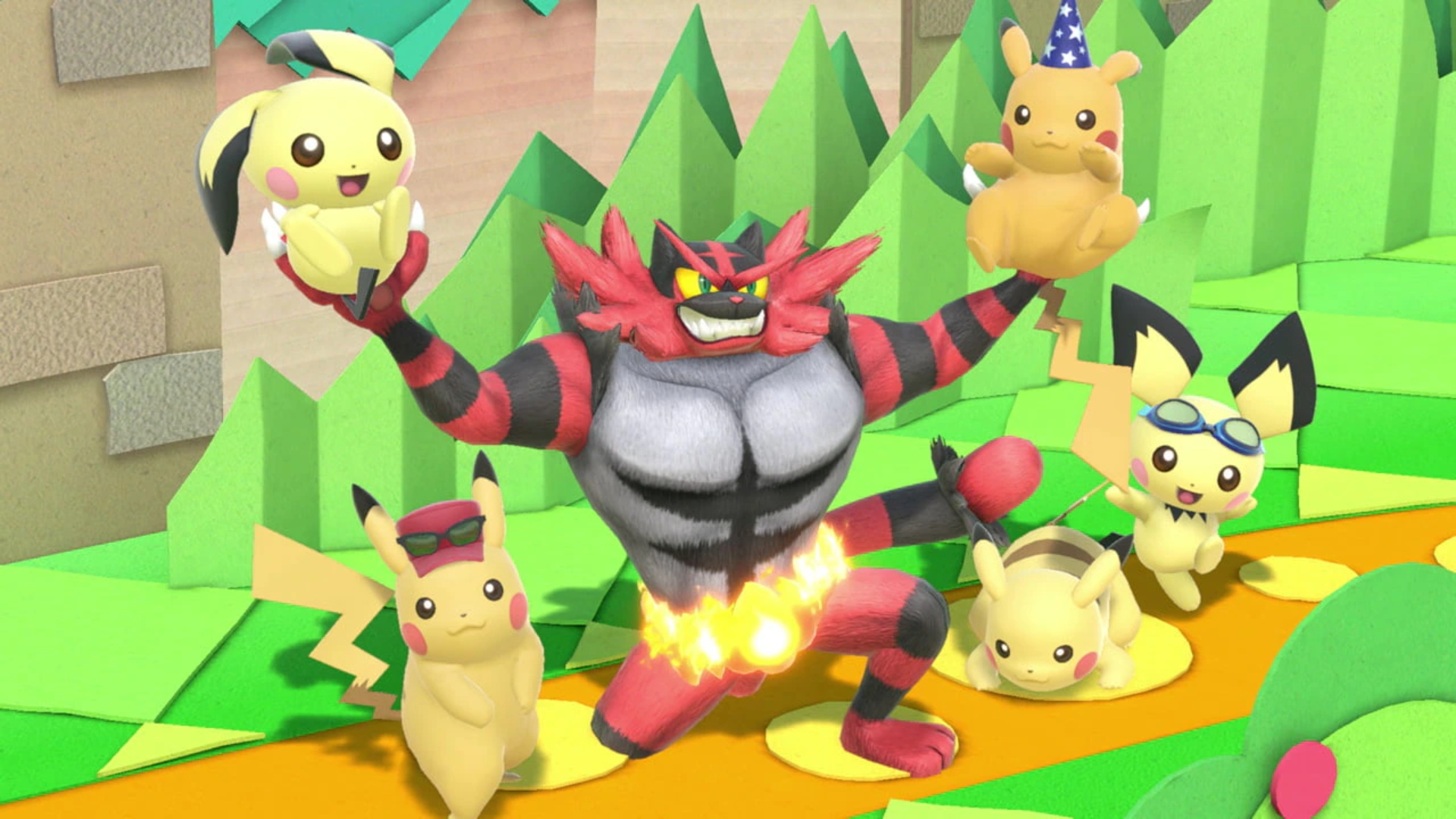 While not strictly a Pokémon game per se, fans of the series will definitely want to give this game a try. Super Smash Bros. Ultimate is a celebration of (nearly) all things Nintendo and Pokémon is a big chunk of that. Pikachu, Jigglypuff, Mewtwo, Pichu, Lucario, Greninja and Incineroar are all among the playable Smash fighters, as well as a Pokémon Trainer (Red or Leaf) who can switch between Squirtle, Ivysaur and Charizard.

There are also lots of popular Pokémon world locales that appear as playable stages, with a huge range of other Pokémon appearing as allies if you release them from a Poké Ball, and even more of them appearing as unlockable Spirits. On top of that, the soundtrack includes a long list of brand new and remixed Pokémon tunes. 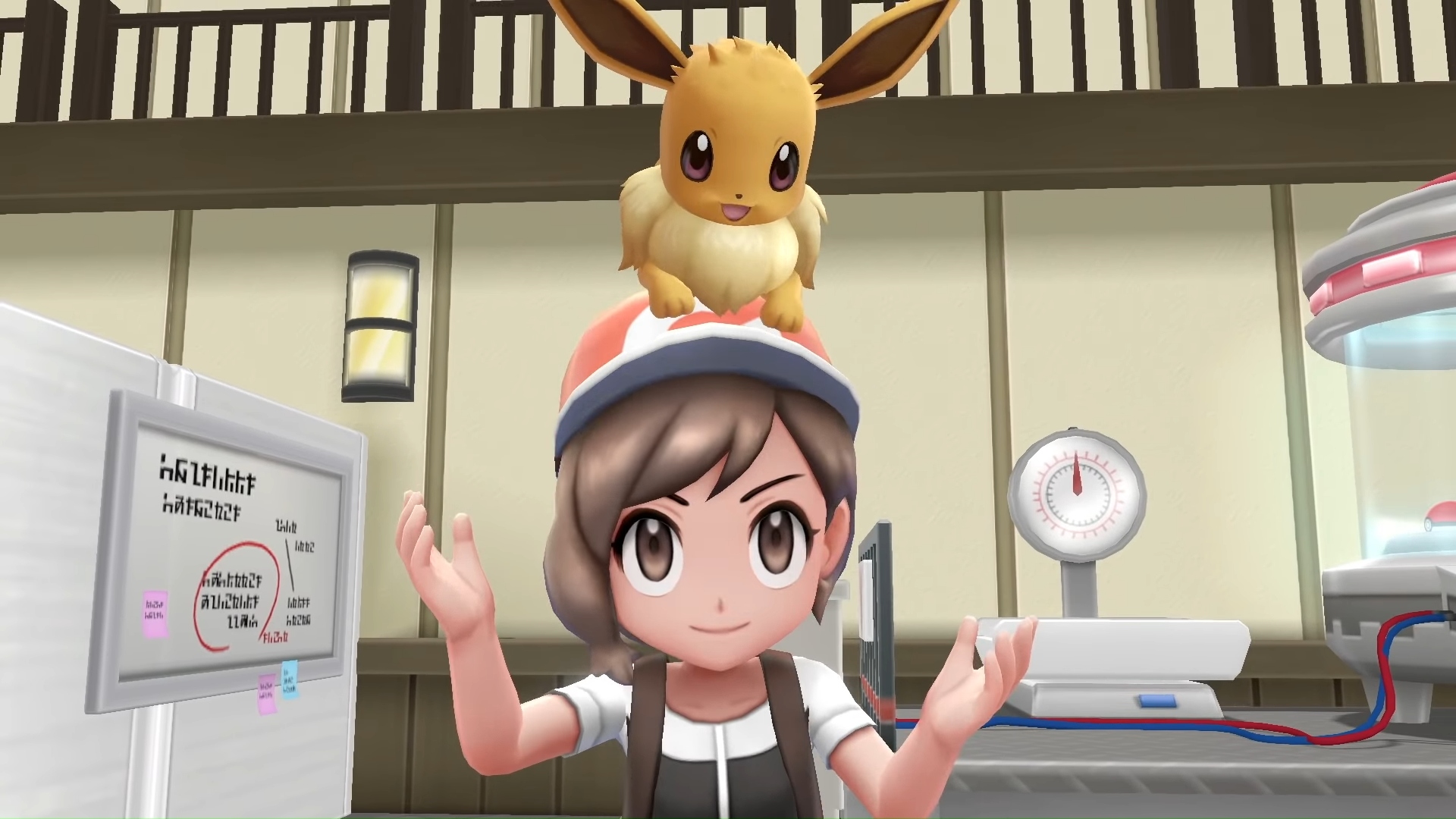 The first generation of Pokémon games will always be considered the most special to certain fans and it’s no surprise that Game Freak have chosen to revisit them so many times since. Let’s Go, Pikachu and Let’s Go, Eevee are essentially remakes of Pokémon Yellow, but they add a number of new spins to the old formula.

Around this time, many new fans had appeared after downloading Pokémon GO, so many of the Pokémon catching mechanics from that game were incorporated into this one. In fact, the two games even connected to each other, allowing you to unlock a rare legendary Pokémon: Meltan. These are just two of many new features that you’ll find in this return trip to Kanto. 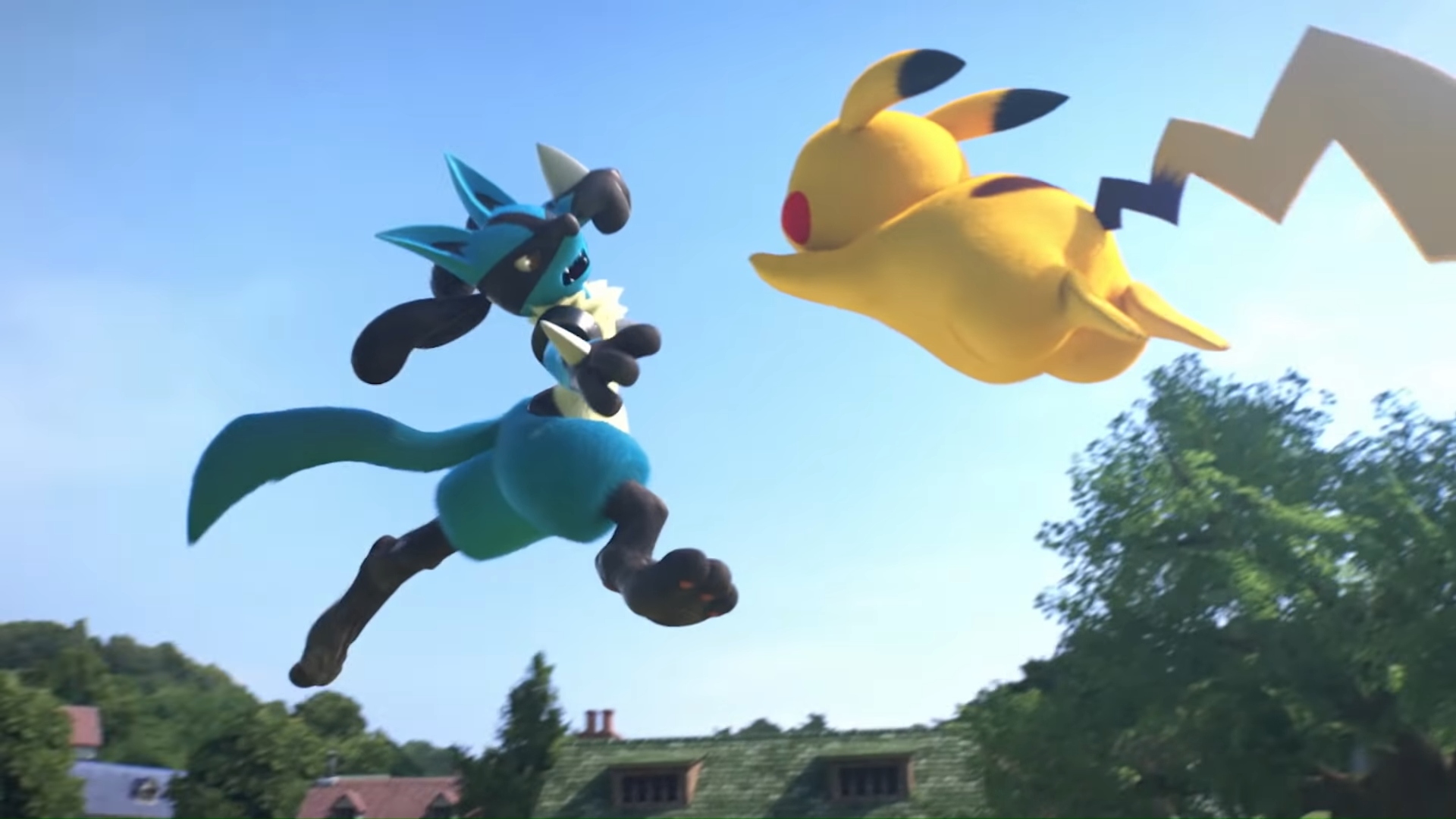 Originally, Pokkén was released for Wii U, but as with most of that console’s exclusive games, it later received a Switch port so it could reach a broader audience. Pokkén is the answer to the question “What if you could be Pokémon in Tekken?” and it was even developed by Bandai Namco, the masterminds behind Tekken.

This game provides a very different way for you to take control of your favourite Pokémon characters. Fans will be very used to Pokémon fighting in turn-based RPG battles, but the fighting game mechanics here are more involved than what we’ve seen before. Even the art style has a more realistic look than most of the series.

If you already had the game on Wii U, it’s worth getting again if you want to see some of the new characters it added (including Blastoise). For what it’s worth, we included it on our list of the best Switch fighting games.

We hope that this is a useful point of reference for any fans who might want to catch up on all the Pokémon games in the Switch library. Check out our guide on the best Switch games for recommendations on other games to try.