Dark Souls is one of the most popular videogames out there with a loyal fanbase. Heck, it’s such a hit that it’s the godfather of an entire genre. However, it’s not just its notorious difficulty that people love, but the characters found within too, one of which is Dark Souls’ Gwyndolin – a very interesting character that has more of an influence on the game’s events than you might realise.

Therefore, we feel it’s only right that we take a deeper look into who Dark Souls Gwyndolin is, his covenant, what influence he has on the game, how to find him, and how to beat him should you decide to tackle his optional boss fight. No matter what you want to know, you’re bound to find it below.

Of course, Gwyndolin is just one of many characters you can find in Lordran, and if you want to know more about all of the Dark Souls bosses, you should fight your way through our guide. We also have Dark Souls divine weapon and Dark Souls bonfire guides to help you out as you journey through this desolate world.

Anyway, without further ado, here’s everything you need to know about Dark Souls Gwyndolin. 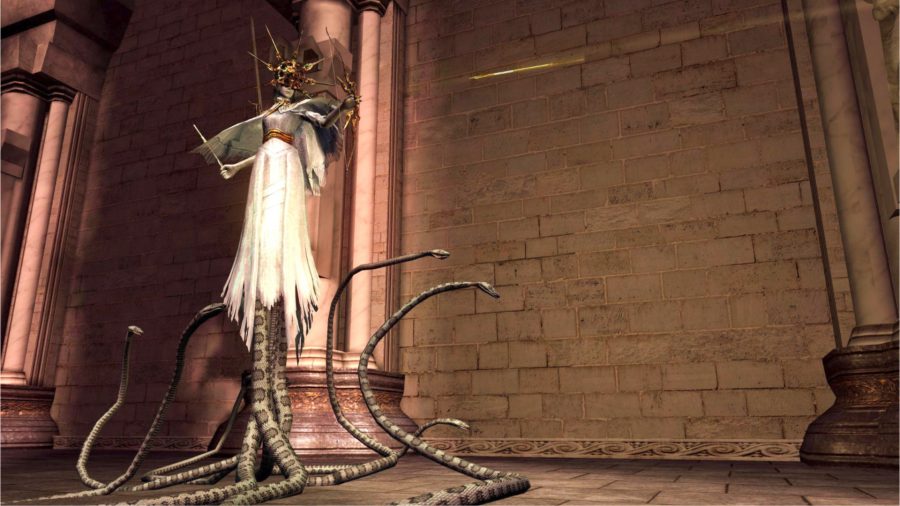 Who is Dark Souls’ Gwyndolin?

Dark Sun Gwyndolin is the youngest son of the first Lord of Cinder, Lord Gwyn. As such, this sorcerer is a god, alongside his two siblings – the nameless firstborn son and Princess Gwynevere. It’s fair to say that Gwyndolin didn’t have the best start in life, especially since he has an affinity with the moon (hence the name Dark Sun).

You might wonder why on earth an affinity with the moon is a bad thing? Well, when your father is the Lord of Sunlight, your brother is the founder of the Warrior of Sunlight covenant, and your sister is the Princess of Sunlight, you kind of stand out. Unfortunately for Gwyndolin, his father doesn’t hide his disappointment. In fact, due to the moon being considered feminine, Gwyn chose to raise his youngest child as a girl, despite him being a boy.

In the end, despite how his father treats him, Gwyndolin’s resolve to earn his father’s affection never falters, even after he leaves to reignite the first flame. Instead, the Dark Sun stands watch at his father’s tomb, and threatens the life of anyone that dares tread there. He also keeps a watchful eye over Anor Londo, the city of the gods. At this time, he’s the last remaining deity here.

Where do I find Dark Souls’ Gwyndolin?

As an optional boss, it’s not obvious to a newcomer where Dark Sun Gwyndolin is. In fact, to get access to him, you have two options – get the darkmoon seance ring or attack Princess Gwynevere.

The first option involves the catacombs, a hellish area that no one should inflict upon themselves any sooner than they have to. When you feel ready, you need to work your way through the area. Eventually, you come across the darkmoon seance ring. After you have it in your possession, return to Anor Londo and head to the giant statue of Gwyn, you know you’re in the right place if there’s an empty statue to his left and a statue of Gwynevere to his right.

If you wear the darkmoon seance ring, the statue of Gwyn is shown to be an illusion, a new path down some stairs is in front of you with a fog gate at the bottom. You’ve got the option to speak to Gwyndolin from outside the fog, doing so means you can join the Blade of the Dark Moon Covenant. Should you enter the fog gate, Gwyndolin becomes hostile towards you. Thus the boss fight begins.

As for the Gwynevere option, if you hit her (she’s in the room behind Ornstein and Smough), she’s revealed to be an illusion, Anor Londo falls to dark, and Gwyndolin announces you to be public enemy number one. It’s worth noting that if you do this, you can’t join his covenant. 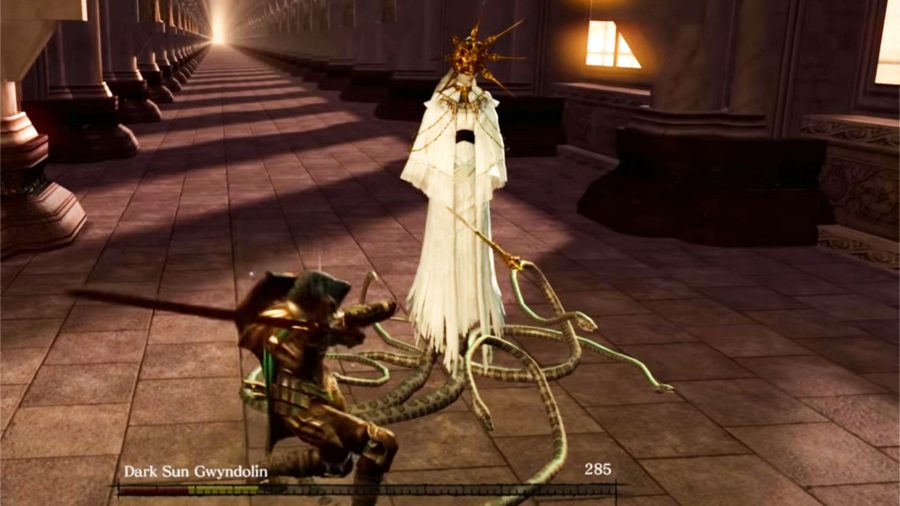 What is the Dark Souls Blade of the Dark Moon covenant?

The Blade of the Dark Moon covenant is led by Gwyndolin, and they have but one duty – to kill those who sin. In order to get an assassin from this group on your back, you must kill Gwyndolin, cause darkness to embrace Anor Londo, slay NPCs, or successfully defeat other players after an invasion.

To join this group, make sure you get the darkmoon seance ring from the catacombs and speak to Gwyndolin in a peaceful manner.

Gwyndolin is certainly one of the more interesting boss fights in Dark Souls, but he’s not too tricky to defeat. In fact, he’s one of the easiest bosses in the entire game. The battle takes place in what feels like a never-ending corridor (it does end, but it takes a while), and Gwyndolin fires a barrage of magic at you.

However, thanks to the numerous pillars around, you can hide and not take any damage – a 100% magic reduction shield is also a viable option if you don’t want to dive behind pillars. After each spell, there’s a small break in Gwyndolin’s offence, and this gives you the chance to move forward. Eventually, you reach the boss, and can get a few hits in. Just rinse and repeat until he’s down.

Phew, there you have it, everything you need to know about one of the most fascinating characters in the world of Dark Souls. Should be after something new to play, our list of the best games like Dark Souls is sure to please you.