Pokémon Unite’s Cinderace is a fiery little attacker with the ability to dish out some nasty damage from mid to late game. It’s categorised as a novice champion, but there’s definitely a level of skill to make full use of your kit and outrun your enemies, so you’ve come to the right place if you need a little help.

In our Pokémon Unite Cinderace guide, we will tell you all about this goal-scoring critter’s moves, the best held items and battle items to equip, and the best way to go about securing your wins. Cinderace is not the strongest early game pick, but it scales massively as it evolves. So, as long as you make good use of your range and buffs, you will be zipping around the map dishing out KO’s and scoring goals in no time.

What are Pokémon Unite Cinderace’s moves?

Cinderace has a really useful set of moves in Pokémon Unite, and can be played either as an aggressive champ right on the front line, or can stay at the back, kiting the enemies and hopping in to deal some nasty finishing blows.

Cinderace starts as Scorbunny, then evolves to Raboot, and finally Cinderace. Until you evolve, your health and damage are very low, so it’s important to ensure you farm early in the game. However, when you hit your final evolution, you will be a true force to be reckoned with, sporting some great mobility. Try to get to level five before you engage in any team fights. Play it safe, and hang back to take advantage of your attack range, only poking enemies if they step into your farming zones or goal. By the time you hit the higher levels, you will be a tough enemy for anyone to come up against – as long as you don’t get too close.

Of course, in MOBAs you always need to approach each match with flexibility. But here are some of the best choices for making the most of this versatile, high-damage attacker. 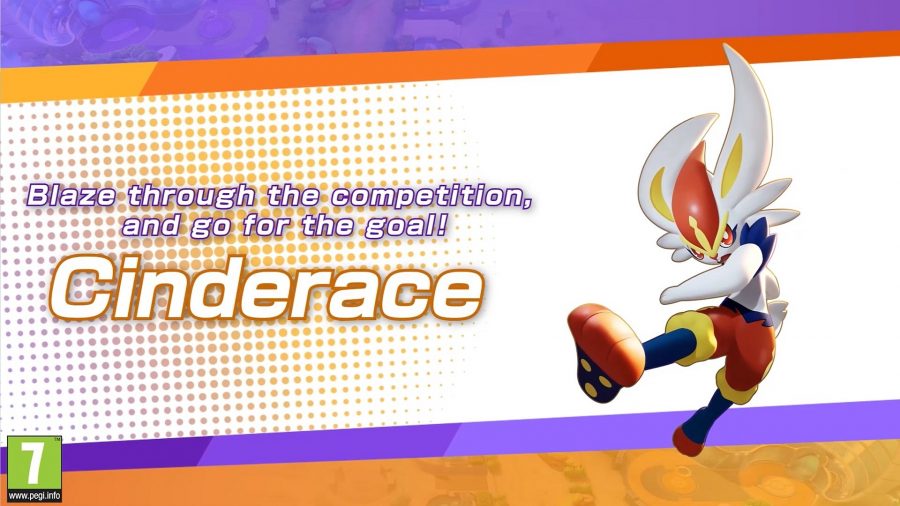 As mentioned above, it is integral for Cinderace to hang back and farm as much as possible early game. While your damage is good right out the gate, you’re weak to attack and don’t stand much of a chance against stronger enemies. It doesn’t take too long to get to level five, and when you do, you’ll be a lot more ready to hop into the fray. Though this early phase of the match sounds tough, it will be worth it as you get stronger and see your damage skyrocket!

Ember is a brilliant choice for your first move, as it has a decent range and a low cooldown. If possible, coordinate with your team to push and use this move to steal some of the enemy jungle, as the sooner you get to level seven, the better.

Low sweep is a very useful move, especially if you are used to the dash in other MOBAs like League of Legends. It deals a decent amount of damage when it hits in addition to its high mobility, allowing you to close the distance and deal a killing blow on a low-health enemy that’s trying to escape. However, it can be even handier as an escape route. Be mindful that the game will automatically lock onto an enemy, but if you move the right C-stick you can dash in any direction, which is extremely useful and allows you some really good mobility, which is much needed considering your low health.

We recommend you pick ember first, then low sweep. 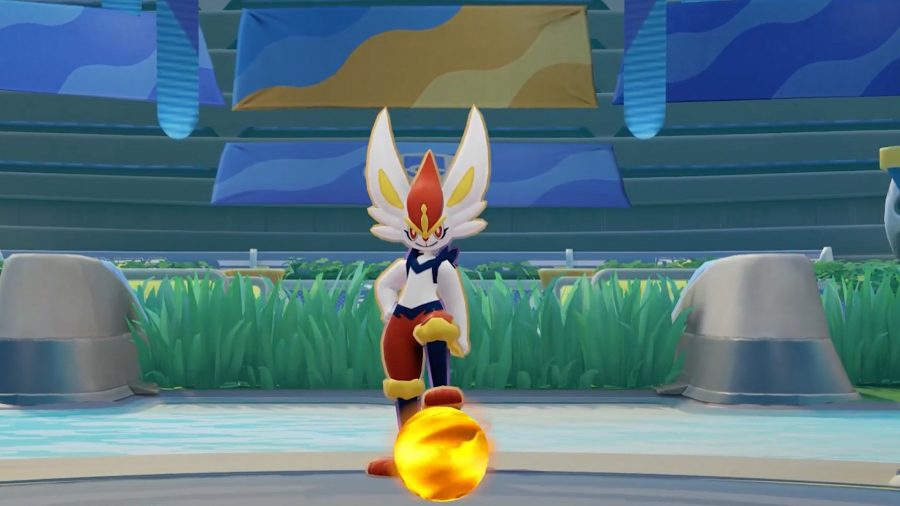 This is where things really start to pick up for Cinderace. These two options are direct upgrades to your ember ability, and both are useful in their own way. Blaze kick turns ember into another dash ability, but this one allows you to knock enemies back, and when upgraded has the extra perks of invulnerability and extra attack speed. Like low sweep, this dash can also be very useful when you’re trying to make a speedy retreat.

On the other hand, pyro ball has a very long-range, and can offer up some great opportunities to poke enemies, even through walls. It’s brilliant for kiting opponents, and, with some practice, can even allow you to steal kills on wild Pokémon such as Rotom and Zapdos, which can help you swing a bad game back in your favour.

At level eight, you get to upgrade low sweep, once again pushing you to choose between an aggressive approach, or something with a bit more defensive utility. Feint grants you a movement speed buff, as well as a brief spell of invulnerability. This move can be a little tricky to use to its full potential, but is brilliant both for evading attacks and for executing good ganks.

Flame charge is similar to low sweep, but will damage all enemies in your path, and even slow them in the process. It’s very handy for catching mobile Pokémon, and for escaping sticky situations, but can also have you charging into a dangerous place if it isn’t used well.

Again, we recommend you make this choice based on your personal playstyle. Feint is a strong choice, especially if you want to hang back and play it safe, but if you’re feeling a little more confident about running into battle, you should pick flame charge.

Cinderace’s unite move is a powerful punch to the gut for the enemy team, and can completely turn the tide of a team fight. It hones in on one chosen target, while also dealing a good chunk of damage to all surrounding enemies. It’s best to aim for a target like a healer or attacker to make a larger battle a little easier. Alternatively, you can use it to polish off an escaping enemy with low health if the rest of your kit is on cooldown. 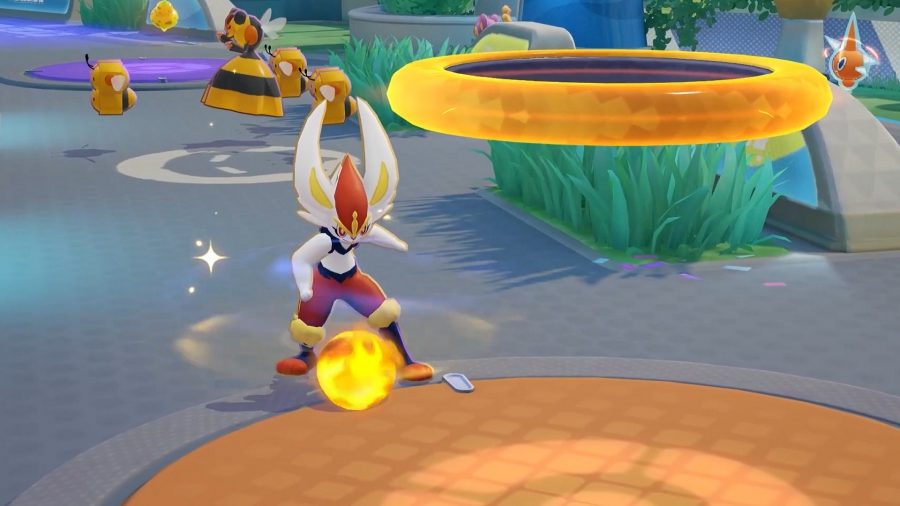 All the critters in Pokémon Unite either specialise in attack or special attack, which dictates what items are effective for them, and what enemies they are weak or strong against. Cinderace is an attack Pokémon, meaning the damage he deals is physical.

What are the best held items for Pokémon Unite’s Cinderace?

You can choose up to three held items. These are some of the best options, primarily focusing on further boosting your damage, to truly push Cinderace to its full potential. With enough attack damage and crit in conjunction with your passive, you will be zapping enemies down with just your standard attack.

What is the best battle item for Pokémon Unite’s Cinderace?

You can choose one battle item per match, for Cinderace we recommend picking one of the following. 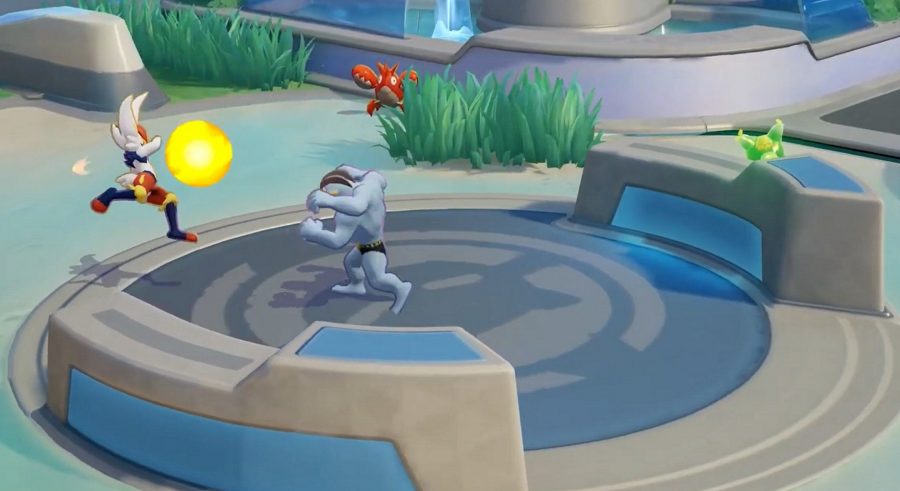 If you want to know more about Pokémon Unite, we have a super useful Pokémon Unite guide. Or you can check out our list of the best mobile MOBAs if you’re looking for something new to play.