We hope you’re enjoying Pokémon Unite, and if you’re yet to play it, well, you should give it a go, especially if you consider yourself to be a Pokémon master in the making. It’s a 5v5 MOBA that sees you pick from a roster of Pokémon, filling various roles on the team – you can take part in casual battles, or join the big leagues in ranked matches. As for what creatures are available, you can choose from fan-favourites such as Pikachu, Charizard, Gengar, and Alolan Ninetails.

In our Pokémon Unite Greninja build guide, we offer our recommendations on which held items you should take to war with you, which battle items suit Greninja best, and which moves are worth unlocking. Greninja is an attacker, meaning its job is to bring the pain and score some points on the battlefield – can Greninja throw shurikens? Sure-he-can.

What are Pokémon Unite Greninja’s moves?

Greninja is an attacker, meaning it has abilities that can cause some serious damage, but there are still decisions to be made in how you approach the battle. For us, it’s to be as aggressive as possible, taking down any opposing Pokémon that gets in our way. Of course, some of Greninja’s moveset takes heavy inspiration from the latter part of its name – ninja – making it quite a fun Pokémon to play as. 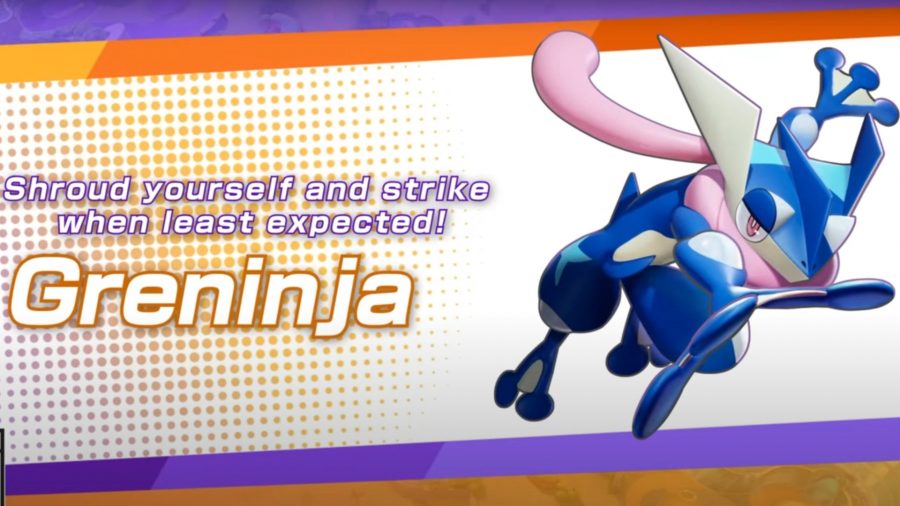 How does that old saying go, if they hit you, you hit them back twice as hard? Well, Greninja takes this to heart. After losing half of its health, the ninja frog gets a nice increase in damage. Oh, and don’t worry about the opposition running away. Movement speed also receives a boost – so, go out there and show your enemies why they should never mess with a ninja.

Bubbles, my bubbles! In the early going, we suggest choosing bubble as your first ability. Unlike substitute, you can damage the opposition by blowing bubbles at them – plus it slows them down, be this because they hurt or your foe enjoys popping them, we aren’t sure. Of course, being able to disappear like a ninja and leave a dummy to get hit instead of you is great, and it does come in handy, but being able to dish out some damage is a bit more important as an attacker.

It’s decision time. Do you throw stars at opposing Pokémon or ride the waves? Well, we recommend choosing water shuriken – it’s Greninja, not Grensurfer, after all. Besides, the throwing stars cause some severe harm to opponents and have a high hit rate. Moreover, your movement speed increases when using this move, and for each shuriken that lands, you get a bit of health back.

What’s more deadly than one Greninja? Three of them, of course. The double team ability sees the Pokémon create illusionary copies of itself that can harm the enemy. However, for our highly aggressive build, we suggest embracing your inner ninja with the smokescreen ability. This ability sees you roll out of a potentially dangerous situation, leave a smoke cloud behind, and receive a massive boost to your next attack. Your opponent won’t know what hit them – literally. They can’t see you if the smoke is blinding them.

You get a star, and you get a star. Everyone gets a star. Greninja’s Unite ability is waterburst shuriken, and yes, it’s as fun as it sounds. This ability is perfect for an attacker, having the potential to wipe out various members of the opposite team as Greninja creates one huge shuriken and brings it down on top of its enemies. 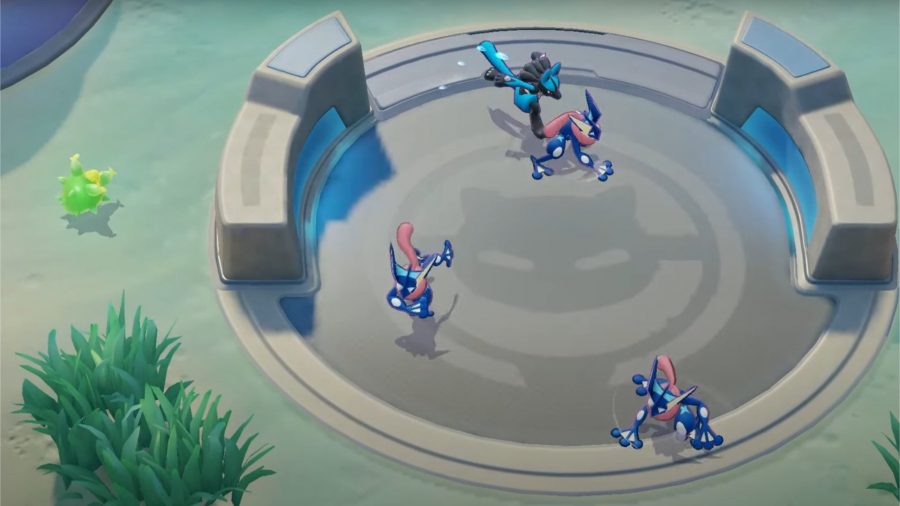 What are the best held items for Pokémon Unite’s Greninja?

In Pokémon Unite, all competitors can take three held items onto the battlefield, and there’s a fair few to choose from – all of which offer varying benefits. For example, one item may boost attack, while another raises defence, or shares experience points. Given Greninja is an attacker, we want to use items that boost its damage output. If you want to know more about Pokémon Unite’s held items, check out our guide.

A ninja must be quick, and swift, lest they fall. Greninja doesn’t need to worry about that with the float stone, as this item increases movement and attack speed, meaning it can attack as quickly as a flash.

This item is a must-have for any attacker due to its ability to increase your damage output and speed – two attributes that are crucial to any Pokémon in Greninja’s role.

Scope out the competition with this item. By using the scope lens, you get an increase to critical hit, upping your chances of landing a potentially fatal blow – and let’s be honest, ninjas aren’t exactly known for giving a little poke and letting their target walk away.

Deliver us your wisdom, oh wise Greninja. With the wise glasses, your trusty ninja frog boosts its special attack damage, and the amount of healing it receives for landing a special attack. Seriously, consider this item. It’s a wise decision. 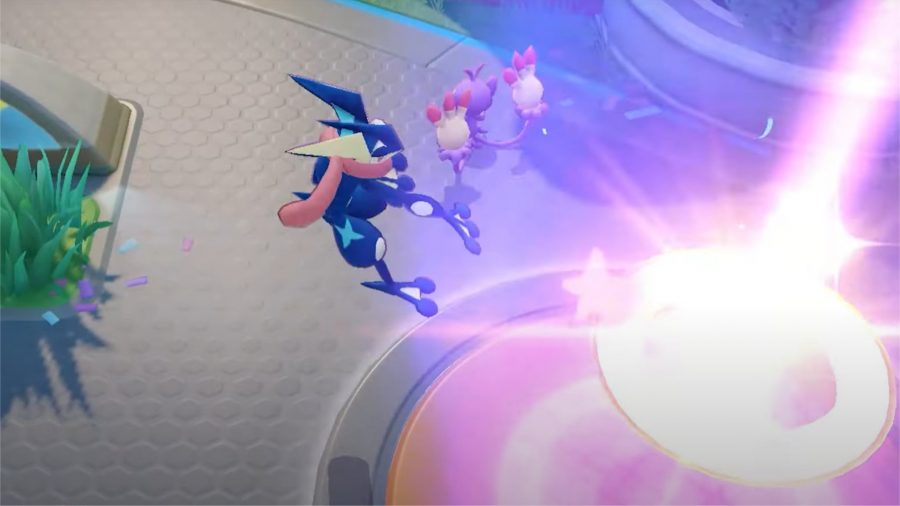 What is the best battle item for Pokémon Unite’s Greninja?

In each match, you can take one battle item with you. Much like held items, it’s worth thinking, and taking one that suits your role, playstyle, build, and, most importantly, the Pokémon you’re playing as.

Besides this item sounding adorable, it comes in handy in the early game for Greninja, you know, before he becomes a badass ninja and is still hopping around as Froakie. It prevents wild Pokémon from attacking you, while also increasing the amount of damage you cause – meaning you can level up quicker and evolve.

Everyone needs a quick escape route, and the eject button provides just that. If things become too much, and it looks as though Greninja may fall in battle, simply activate this item to teleport anywhere else on the map.

All the critters in Pokémon Unite either specialise in attack or special attack, which dictates what items are effective for them, and what enemies they are weak or strong against. Greninja is an attack Pokémon meaning it deals physical damage. 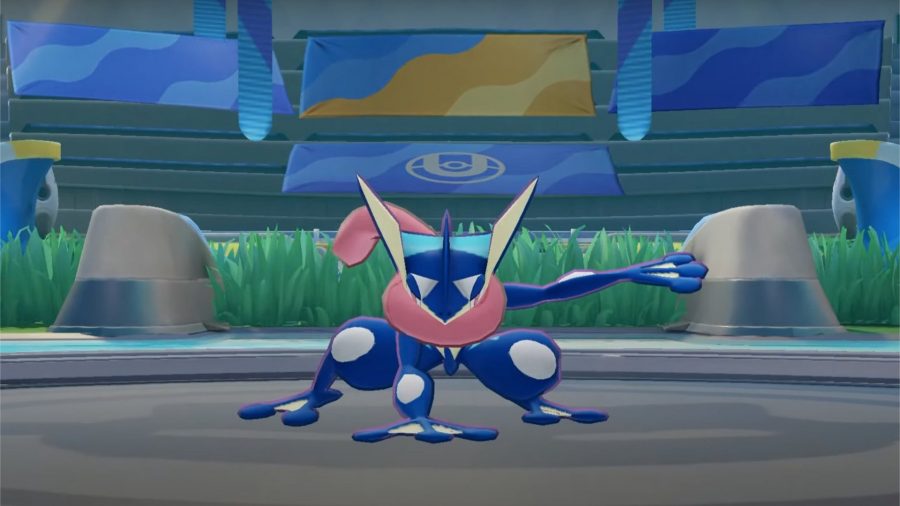 Who does Pokémon Unite’s Greninja work well with?

Water and lighting together is quite the terrifying combination, and that rings true with Zeraora and Greninja. One is a speedster, while the other is an attacker. As such, these two are a formidable duo on the front lines. Zeraora can paralyze the opposition, leaving them open to Greninja’s shurikens.

We have a love-hate relationship with Cramorant. We love it when this Pokémon is on our team, but want to run for hills when it stands on the opposite side of the battlefield. However, if you can partner with a Cramorant, the enemy defence won’t stand a chance.

There you have it, our recommendations for Pokémon Unite’s Greninja build. Since you’re here, go and check out our picks for the best Switch RPGs here.