Pokémon Unite is a free-to-play 5v5 team MOBA game that has players battling it out and levelling up their favourite Pokémon. There’s a variety to choose from with fan-favourite, Pikachu or all-rounder, Lucario. But if the speedy, agile nature of Talonflame, famed for its ability to attack and flee, is a bit of you then we’ve got you sorted. Talonflame is arguably not the most HP-bolstered Pokémon out there but its mobility skills and short-range prowess are not to be laughed at.

A huge decision in each Pokémon Unite battle is who you take in with you to fight the opposing team and you’ll want to pick a great starter Pokémon to help you out early on. If you’re thinking about harnessing the speedy skills of Pokémon Unite’s Talonflame, we’ve put together the ultimate build guide that takes a dive into the best moves and items you’ll want to equip to give you the best chance of success.

Each Pokémon possesses a variety of moves to choose from, depending on your level. Your choices are variable, but we’ve put together a guide to the ones we think stand you in good stead. Talonflame is an incredibly mobile Pokémon, so you’ll want to play into the fact that it can move really well and get out of trouble fast.

As we’ve already mentioned, Talonflame’s HP isn’t the best but what it lacks in HP, it makes up for in the ability to deal significant damage and get away quickly, if you build Talonflame right. It’s an aggressive gameplay choice and one that will require some patience. 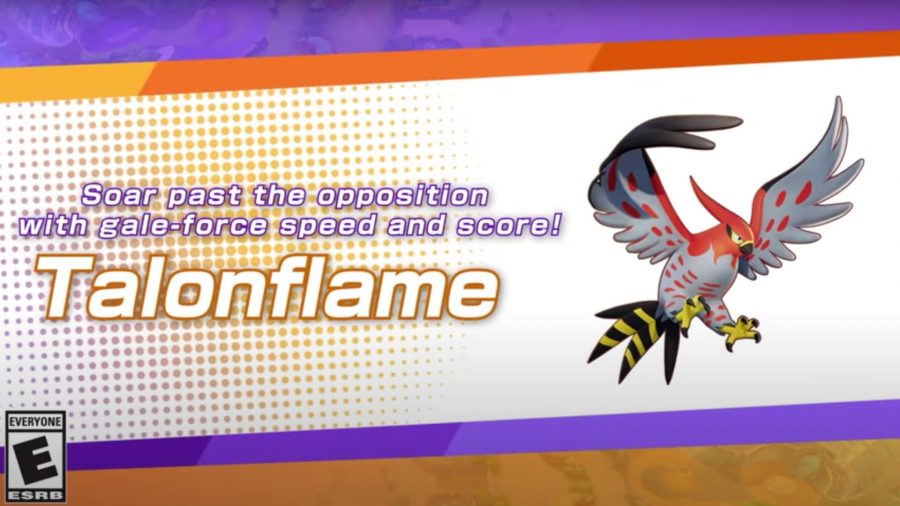 Between levels one to three, Talonflame has a choice to make between two abilities. You’ll get to pick both eventually, but which one you choose first certainly plays a part in how you advance up the ranks.

Peck is a great move for dealing damage fast with a quick cooldown but it does leave you vulnerable for counterattacks. Acrobatics is all about that damage and a move that you’ll be looking to harness as you advance with Talonflame. That’s why we recommend you pick acrobatics first, then peck.

When you reach level five, you’ll have to make another choice. This time, you have two to choose from but you can only select one. The one you choose will replace peck. Flame charge allows you to swoop in fast with increased movement speed and a flurry of damage unleashed on the opposing Pokémon. Aerial ace deals good damage which can be improved even further with an upgrade and the following basic attack will be boosted which really ups the overall impact of your move.

Of course, with each choice comes a list of reasons for and against, but we’d recommend choosing aerial ace to play into the late game.

You’re deep into battle at this point and you’ve got to make another decision. This time between fly and brave bird. As always, we’re looking to heighten Talonflame’s mobility skills whilst delivering damage at opportune moments. With fly, you can launch into battle from afar and unleash great damage on the opposing team. And, if you get into trouble, it’s great for a quick escape letting you fly out of range and back to safety. With brave bird, its AOE damage also resets the cooldown of aerial ace. Hence, why we mentioned the late game when choosing aerial ace at level five.

It’s best to work out what the battle is calling for. If the battle lends itself to the sneak attack, then fly is your option. But if you need power and offence, we’d recommend brave bird to build on that late-game damage-dealing attack mode.

Talonflame’s unite move is a wonderful combination of both power and pace. Releasing an aerial somersault of flame-soaked charge, it will both damage the opposing team and push them off objectives or teammates. It’s a great finisher move for dishing out those KOs or for stealing scores. It also buffs up your movement meaning you can get away from enemies or get yourself on the goal to get those points secured before the game ends. 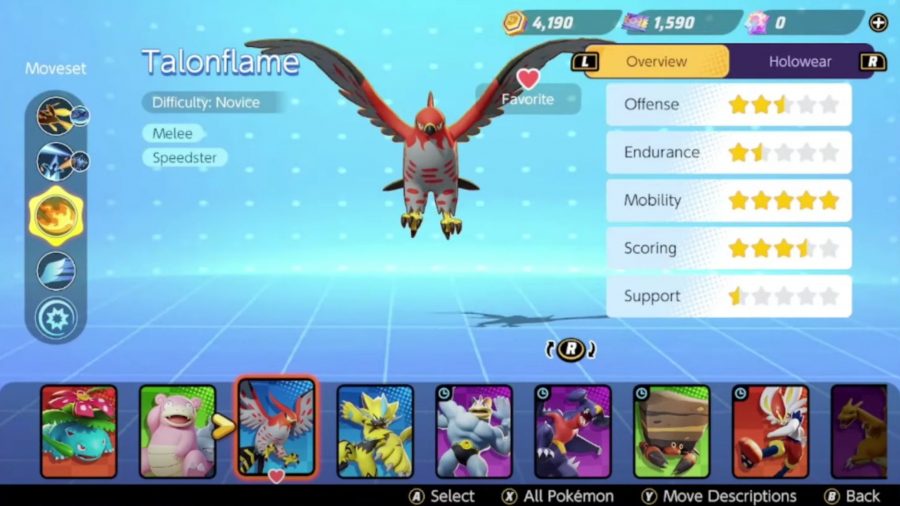 If you’re looking for a full-blown attacking Talonflame, we’ve put together a build that has damage and dash at the forefront. This build is all about dealing out hits and escaping with ease but of course, it’s just our suggestion.

What are the best held items for Pokémon Unite’s Talonflame?

You can choose up to three held items. The below options play really well into Talonflame’s mobility skills, while keeping the pressure on with damage-dealing hits:

Recovers 1% of your max HP per second whilst out of combat.

Increases basic attack damage and improves speed outside of combat.

What is the best battle item for Pokémon Unite’s Talonflame?

You can choose one battle item per match. For Talonflame, we recommend you choose one of the following.

Teleports your Pokémon quickly, great for a fast retreat back to safety.

Stuns nearby wild Pokémon and increases damage dealt to them.

Even fierce birdies like to look nice. Dress up your Talonflame with these cool skins.

And that is everything you need to know about Pokémon Unite’s Talonflame. If you’re after other competitve games, be sure to check out our picks for the best mobile MOBAs here.