There are plenty of big baddies in Genshin Impact, but who’s the biggest and baddiest of all? No, we’re not talking about Paimon (though we might be – head over to our Genshin Impact Paimon guide to find out more about that). We’re talking about the ever-ominous and mysteriously named Unknown God.

Okay, so we might not know if Genshin Impact’s Unknown God is actually a real ‘big bad’, or if she’s truly evil at all – we’ve seen plenty of characters appear morally questionable at first, but turn out to be absolute sweethearts with their own motivations and reasons for their actions. The complex individuals you meet along the way are honestly one of the biggest factors that make this game so wonderful. However, let’s face it, the main thing we know about the Unknown God so far, is that she’s a bit of a meany, and certainly not humanity’s biggest fan.

In this guide, we dive into everything we know about the Unknown God so far, the theories that surround her, and where we think her true intentions lie. Of course, if you want to work out the best team to use as backup when squaring off against this cube-wielding celestial, be sure to check out our Genshin Impact tier list.

Who is Genshin Impact’s Unknown God?

Cast your mind back to the opening moments of your Genshin Impact journey. Remember that scary lady who separated you from your twin (aka the entire motivation for the Genshin Impact Traveler’s storyline)? Yeah, it’s her. While it may be easy for you to forget about the larger plot overarching the game when you’ve spent so long exploring the vast nations of Teyvat, the Traveler certainly hasn’t – and hunting down the Unknown God and reuniting with their twin is their main goal. 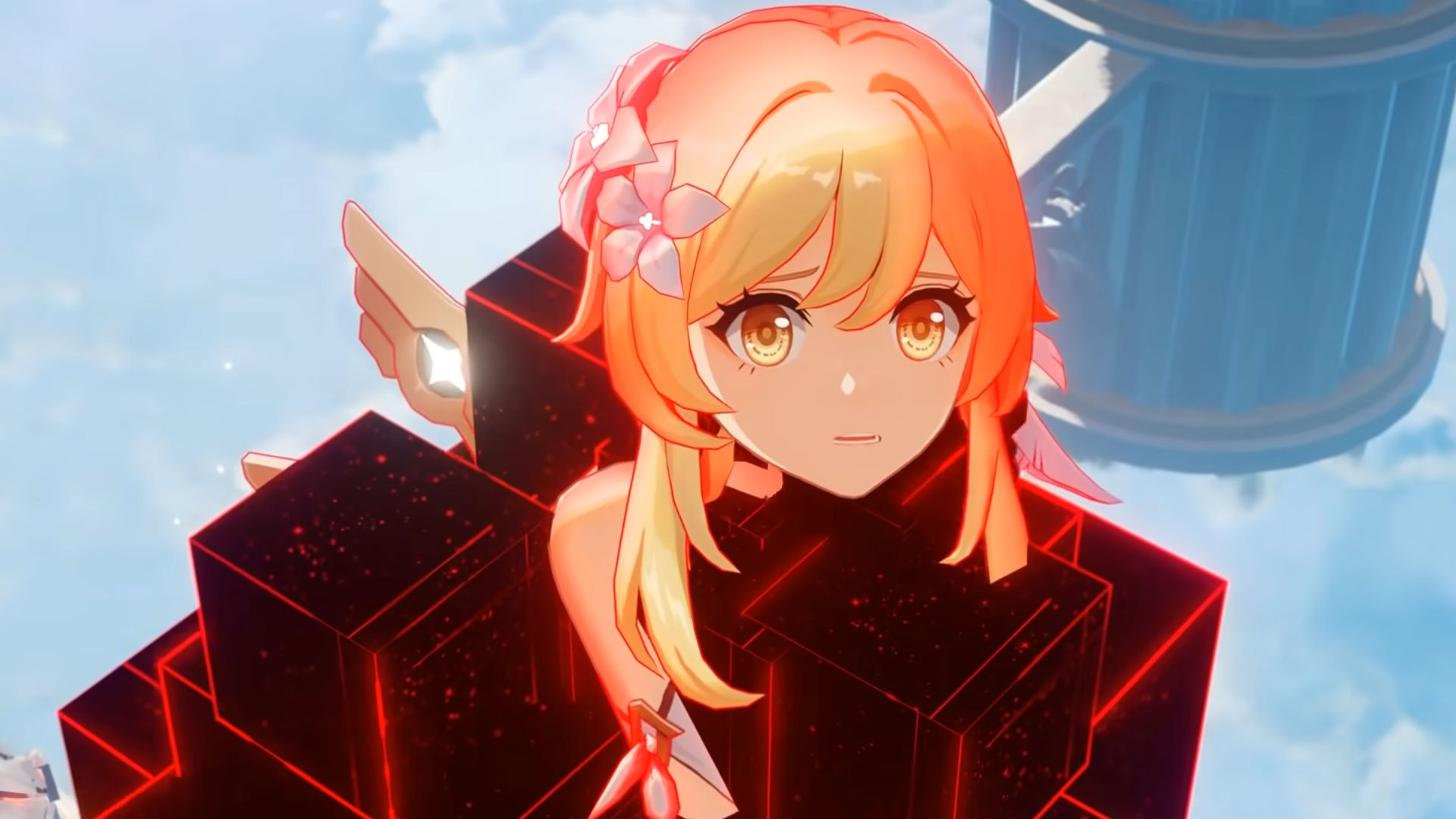 Outside of her being responsible for separating the Traveler from their twin, not much is known about the Unknown God. During their showdown, she announces herself as ‘the sustainer of heavenly principles’, and denounces ‘the arrogation of mankind’, before engaging in battle and sealing the Traveler in dark red cubes, causing them to fall into a 500-year-long deep sleep plagued by nightmares. Coincidentally, the Cataclysm also happened roughly 500 years before the events of the game, but we can’t confirm the relationship between this and the Traveler’s origin at the moment.

It’s pretty clear that the Unknown God has some kind of grudge against humanity, if the way she talks about mankind is any indicator. However, it’s unclear whether this is because she believes that humans disrespect the gods and go against the heavenly principles, or if she has some kind of personal vendetta against them. Either way, they (or we) have obviously gotten on her bad side.

The cubes she summons to engulf the Traveler and their twin fit the description of those that ravaged the Kingdom of Khaenri’ah during the Cataclysm. According to Genshin Impact’s Dainsleif, Khaenri’ah was ‘the pride of humanity’, entirely built by humans without involvement from any god.

Therefore, combining the Unknown God’s resentment of humankind’s pride and belief that they have an ‘unjust assumption of privileges’ (the meaning of arrogation), along with the appearance of her magic attacks, suggests that she was involved in Celestia’s assault on Khaenri’ah, and is, in some way, related to both how the Traveler ended up in Teyvat, and the Archons’ decision to distance themselves from Celestia. But, of course, this is just a theory, and is yet to be confirmed or denied by Mihoyo. 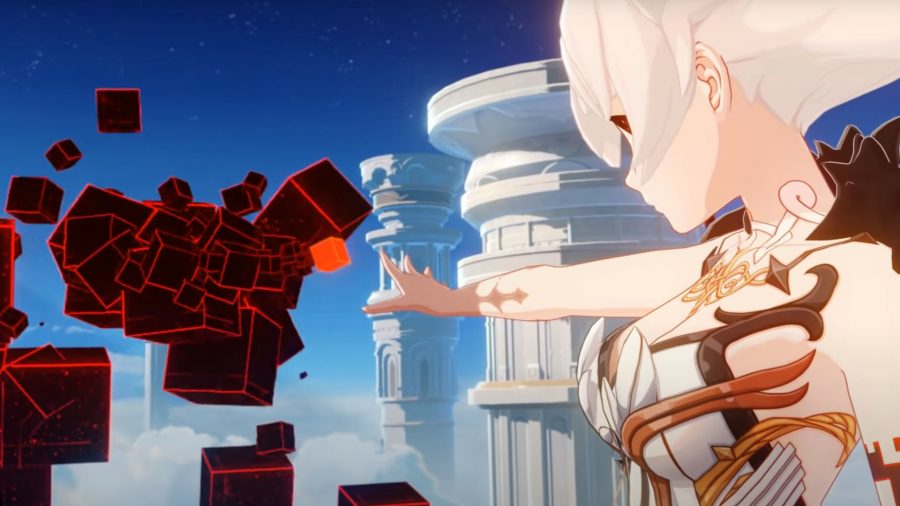 One other thing we might know about the Unknown God is her real name – aside from The Sustainer of Heavenly Principles, of course. Data miners have gone through the game files and discovered that, in the opening cutscene, she is labelled as ‘Asmoday’. Those of you who are up on your Genshin name lore, or familiar with demonology, may recognise this as a mutation of the name ‘Asmodius’, one of the kings of hell from Ars Goetia.

In Ars Goetia, Asmoday is the 32nd Demon Spirit, and the child of Asmodeus, who is the Demon Lord of lust. In many texts, Asmoday and Asmodeus are treated as the same being, though Asmodius is considered to have been born in heaven (and is, therefore, a fallen angel, like Lucifer), whereas Asmoday was born in hell. There are plenty of parallels between the Demon Lord Asmoday, and the Unknown God, including the significance of the number three, and their association with revenge and wrath.

Outside of all the dusty (but extremely interesting, if you ask me) demonology, there’s a more contemporary reference you can draw between the Unknown God and Kiana, a character from Mihoyo’s other hit game, Honkai Impact 3rd. As we’ve had quite a few Genshin Impact characters that closely resemble ones from Honkai, we may see even more parallels in her powers and personality as we get more familiar with the Unknown God. 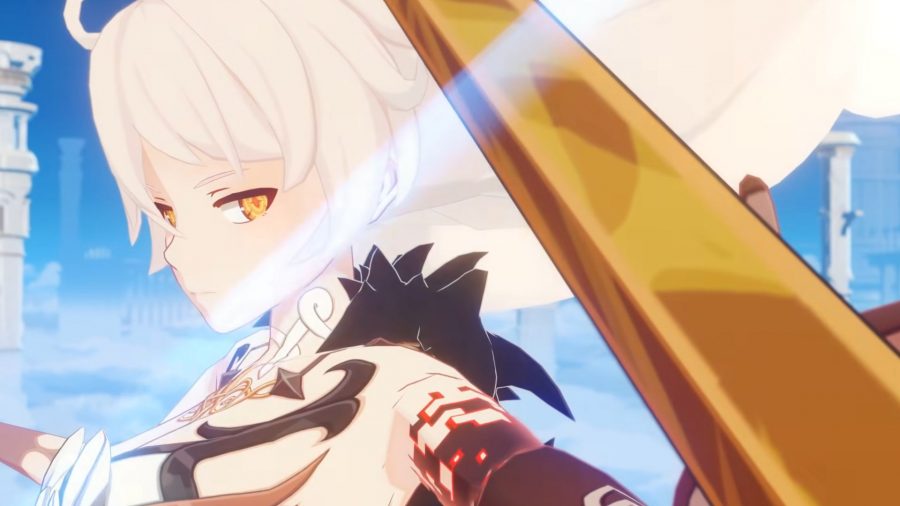 Will the Unknown God be a playable character?

Honestly – who knows? It’s not beyond Mihoyo to release powerful beings as playable characters, and, as mentioned above, they frequently subvert expectations, with many of those initially deemed as evil later showing good intentions and personal motivations that explain their actions.

However, we believe that Genshin Impact is slowly hiking up to a full-on war with Celestia – with the Archons severing their ties by giving up their gnosis after seeing how Celestia treated their people during the Cataclysm, and the ‘heavenly principles’ appearing to mean nothing but trouble for the citizens of Teyvat. Therefore, we think that characters like the Unknown Gods and the others who reside in Celestia are unlikely to become playable characters, and are instead going to be at the centre of the climax of this epic story – when we eventually get there. And believe us, we’re not in a rush for Genshin Impact to end any time soon!

That’s everything we know about the Unknown God so far. Of course, we’ll update this guide if Mihoyo releases any new information, or if we find any interesting Genshin Impact leaks. If you’ve just woken up from a 500-year-nap and need to give yourself a break from stumbling across Teyvat, check out our list of the best games like Genshin Impact to find something new to play.