Pokémon Sword and Shield have reintroduced countless fan-favourite legendaries to the game in the Crown Tundra, legendary birds being top of the list. After all, our favourite Kanto legendaries Articuno, Zapdos, and Moltres have entirely new forms in the Galar region – and it’s your job to catch ‘em all.

Roaming around the Crown Tundra, legendary birds are number one on your list of new Pokémon to capture. First things first, you’ll have to find them. This seems relatively simple, as you head to Dyna Tree Hill and see them feasting in its wondrous boughs. As you approach the huge tree, you’ll spot the legendary birds nibbling on some berries and generally having a good time.

However, your Rotom-phone will ring and startle them, giving them the chance to run off. Unfortunately, there’s nothing you can do to stop this. Now you’ll have to track them down to catch them. This guide will teach you how to find the Crown Tundra legendary birds, and how to catch Articuno, Zapdos, and Moltres once you do.

Everything in our Crown Tundra legendary birds guide:

However – before embarking on any of the quests in this guide, make sure you have seen the birds at Dyna Tree Hill and they have fled, otherwise none of this will work and you’ll find yourself on a wild goose chase. 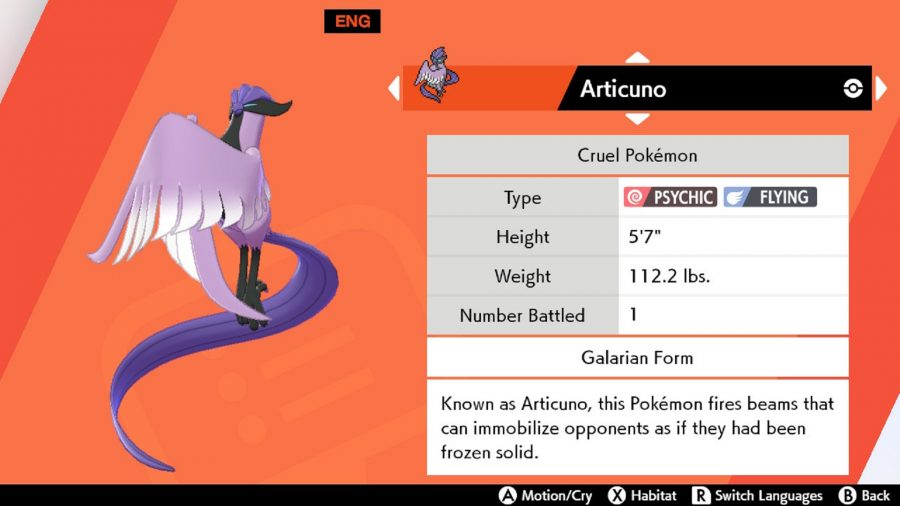 How to catch Articuno in the Crown Tundra

To catch Galarian Articuno, you’ll be sticking around in the Crown Tundra. If you fly to the bottom of Snowslide Slope, you’ll see Galarian Articuno in the air above you. Follow it to the top of the slope and it’ll stop, allowing you a chance to catch it.

At this point, however, it’ll split into three near-identical Pokémon. Try to spot the one whose tail is out of sync with the other two, and run into that one – that’s the real Articuno. If you guess wrong it’ll flee and you’ll have to start the process all over again from the bottom of the hill.

If you’re right, however, you’ll face the level 70 Psychic/Flying-type in battle. As with all the other legendaries, make sure you’re well prepared for the battle – preferably with a dark-type that is immune to Articuno’s psychic attacks. 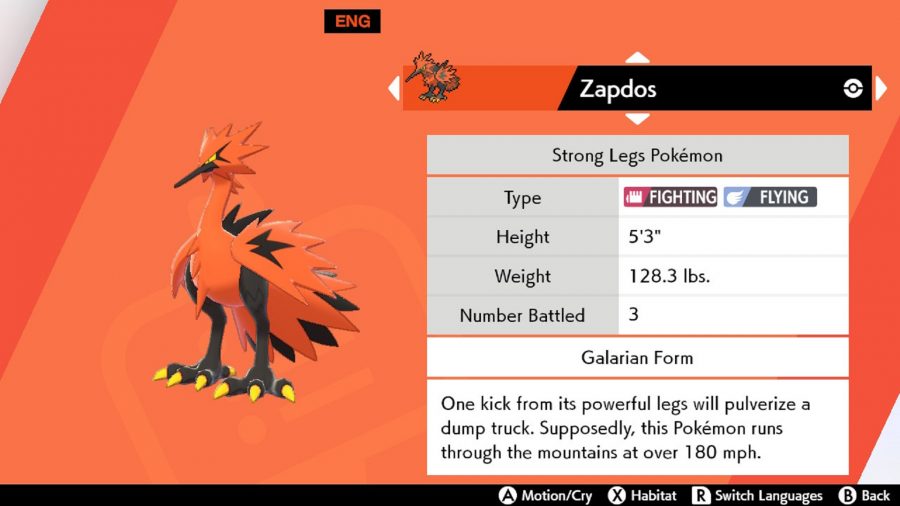 How to catch Zapdos in the Crown Tundra

Galarian Zapdos flees to the Wild Area, so you’ll have to head there to track it down. We recommend flying to East Lake Axewell to get a good view of the land – we spotted Zapdos immediately after flying here on a couple of occasions.

Then, the chase is on. Galarian Zapdos makes like Road Runner and speeds away from you, and you’ll have to give chase on your bike, cutting corners and avoiding other Pokémon. You can try ringing your bell to get its attention before it runs off, but this never worked for us.

When you finally catch up with the breakneck bird, you’re faced with a battle against another level 70 legendary Pokémon, although Zapdos is a Fighting/Flying-type. As ever, make sure you’re well-prepared, as fainting Zapdos or having all your Pokémon wiped out will mean starting the process all over again. 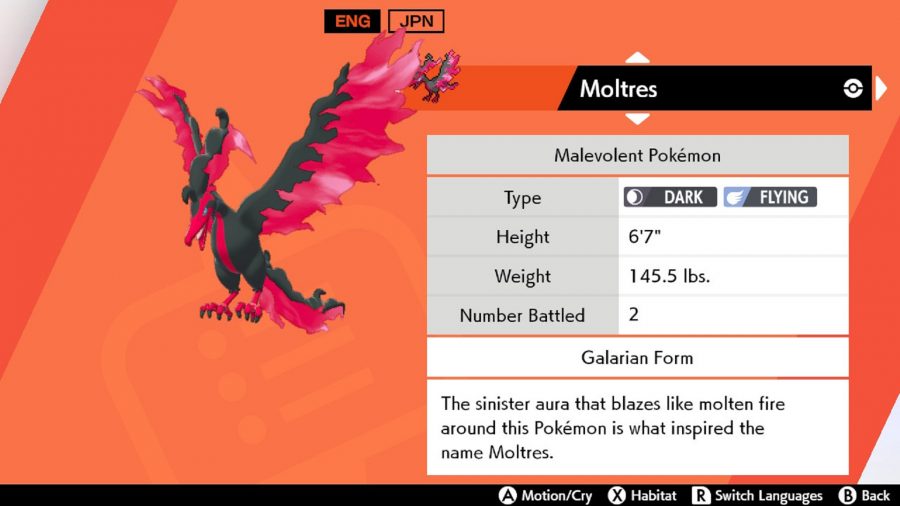 How to catch Moltres in the Crown Tundra

Galarian Moltres flees to the Isle of Armor, and roams there over land and sea. We recommend intercepting it on land, as it’s much easier and there are no Sharpedos on your tail.

If you fly to the Dojo, you’ll see Galarian Moltres gradually approach from the sea. Ring your bell or give a whistle while in its path, and it’ll swoop down to battle you. Prepare for a fight against a strong level 70 Dark/Flying-type, and you’ll be fine.

That’s all there is to catching the Crown Tundra legendary birds. Of course, if you want to catch the Kantonian versions (that’s the original designs from Red and Blue), you can find out in our Crown Tundra legendary Pokémon guide. Alternatively, if you’re stuck on the Regis locations, check that link for a full breakdown – including those dastardly puzzles – and we’ve also got you covered if you’re after Calyrex, its steeds, or the Swords of Justice (and yes, that includes Keldeo).