Everyone wants to know the Crown Tundra Regis locations, and especially how to solve the puzzles to open the ancient temples once you’ve found them. This is arguably one of the most exciting tasks in the Pokémon Sword and Shield DLC, and evokes fond memories in players from years gone by.

The quest to find the Regis – otherwise known as the Legendary Giants – is available through Peony. Everyone’s favourite dad sets you a quest called ‘The Terrible Titans… Lurking Locked Away!’ There are a few puzzles to solve along the way, but it’s nothing to worry about. Follow our guide and we’ll tell you the exact Crown Tundra Regis locations, the puzzle solutions, how to get Regice, Regirock, Registeel, as well as explain the Regidrago and Regieleki puzzle solution, and how to get Regigigas in no time at all.

We’ll start with the familiar three. Anyone who played Pokémon Ruby and Sapphire will remember an incredibly complicated system involving braille patterns, a Wailord and a Relicanth, and using certain HMs at weird intervals. Luckily, this time around things are much more simple.

Everything in our Crown Tundra Regis locations guide:

Without further ado, here’s how to get your hands on the monstrous creatures: 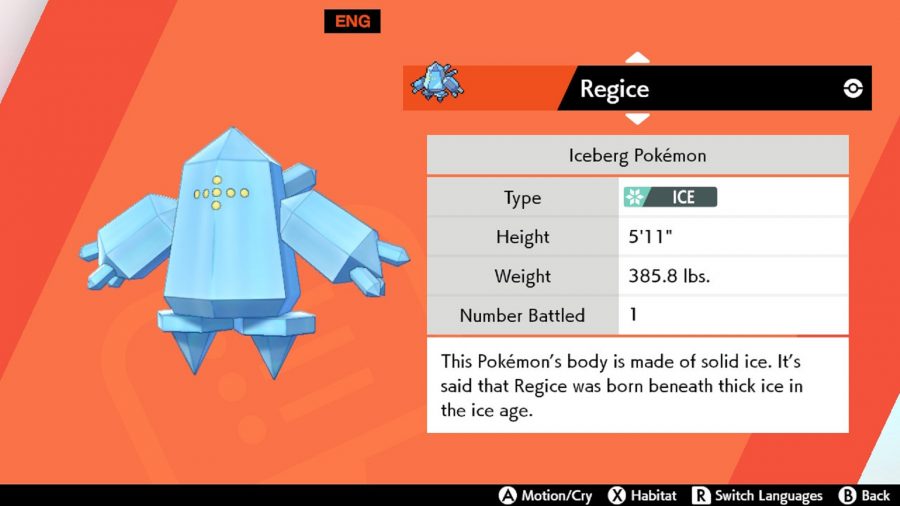 Regice is in the snowiest area of the Crown Tundra map – Snowslide Slope. Head up towards the Tunnel to the Top, but watch out for ruined buildings. You should see two shortly after starting the ascent. Take a hard left after the second building – the one on the left – and head down the hidden path. Follow this to the end, and you’ll find Regice’s temple.

For the puzzle, press ‘A’ on the door and it will tell you to “walk together with a living crystal of snow”. This simply means you have to catch a Cryogonal and have it following you as the first member of your party. There are plenty around, so this shouldn’t be a problem.

Once you’ve gained access to the temple, simply stand on all the dots on the floor so they are illuminated and interact with the stone statue to initiate the battle. All the Regis will be level 70, so take a team of strong Pokémon to the battle – and plenty of balls. We’d recommend using a Pokémon with Sleep Powder, Spore, or Thunder Wave to inflict a status condition on the Pokémon before catching it. 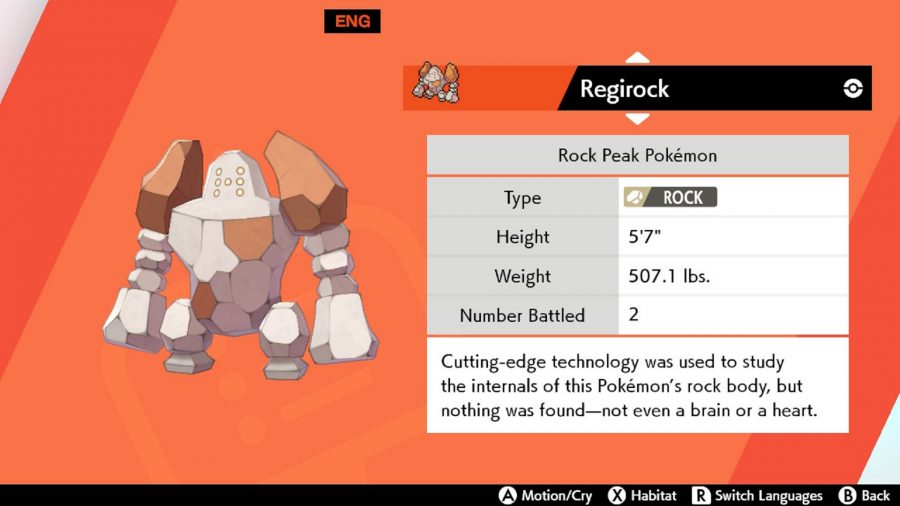 Regirock’s temple is at the far end of Giant’s Bed. We recommend travelling through the old graveyard to get there. After the graveyard, keep to the left and you should find it in no time.

Regirock’s puzzle tells you to give your Pokémon a “never-changing stone” to hold. Give the first Pokémon in your party an Everstone to hold and the doors will open for you.

Light up the floor panels again and interact with the statue to begin your encounter. We recommend following our Regice advice above for catching all legendary Pokémon – but remember to take into account type differences. Regirock is (predictably) a rock-type, so fighting-, ground-, and steel-types will take less damage from its attacks. 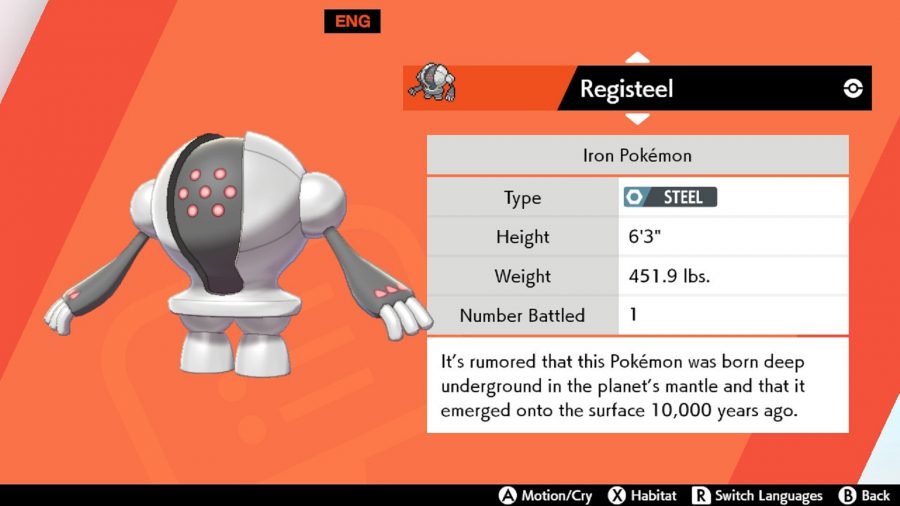 Registeel’s temple is the easiest to find – it’s pretty much unmissable if you travel south out of Freezington, especially if you’re coming out of the exit near the Inn. Simply stick to the right-hand side and you’ll find it within seconds of entering the Giant’s Bed.

However, despite having the easiest temple to find, Registeel has potentially the most confusing puzzle to gain entry. “Let ring the piercing note that will wake the giant of steel,” the prompt says. The answer is more simple than you might think – nothing to do with a Bronzong or Soothe Bell – you just have to whistle. You know, like you do to attract Pokémon. You can do this by clicking in the left joystick. It’s worth noting that this doesn’t work if you’re on your bike – your bell simply doesn’t wake the steely giant.

Hit the floor lights once more and speak to the statue to initiate your encounter. 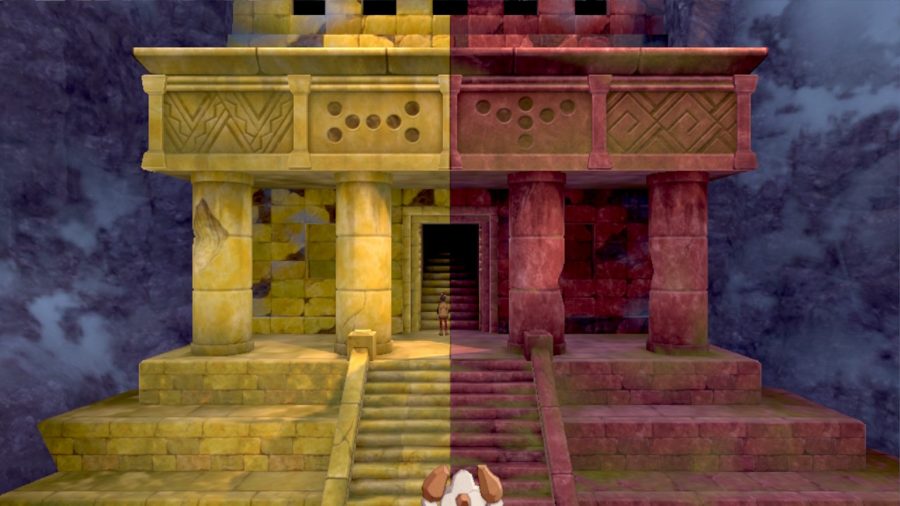 How to catch Regieleki and Regidrago, temple location, puzzle solution

Regieleki and Regidrago’s temple is probably the most difficult to find, located at Three Point’s Pass. Head back to the graveyard in Giant’s Bed and keep going until you come to a river. Hop on your bike and follow the river into a cave – Roaring Sea Caves, to be precise. Make your way through this maze of subterranean slopes and emerge at the Frigid Sea. If you head downhill at every opportunity, you should make it through without too much hassle.

Head straight out to sea and turn right, following the path between the blocks of ice. Head onto land again – not onto the island – and follow the path to the end. The huge temple is unmissable.

To enter, you must have all three Regis – Regice, Regirock, and Registeel – in your party. However, once you’re inside, the puzzle gets slightly more complicated. 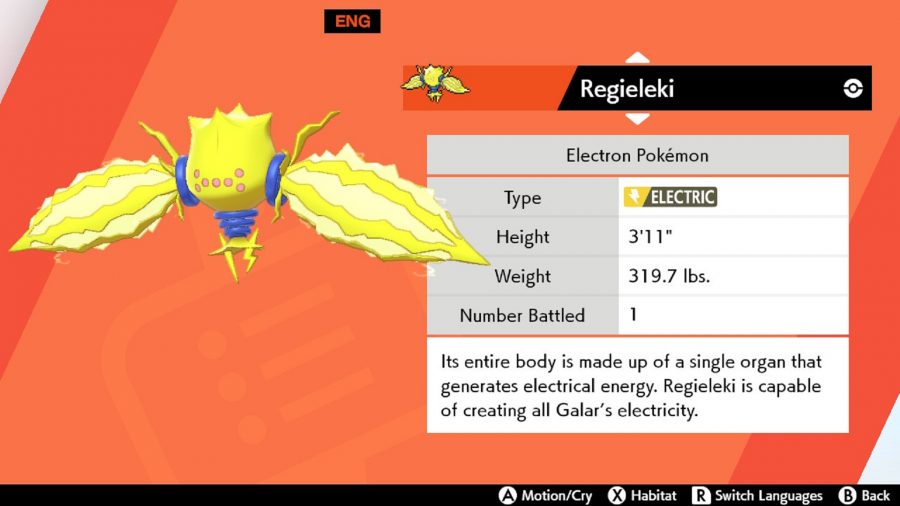 It’s at this point that we should mention you can only catch one of Regieleki or Regidrago. It’s a difficult choice, but whichever you choose affects how you answer the floor puzzle. In this temple, lighting up all the panels doesn’t do anything – you have to match the pattern of the Regi that you want to capture.

The patterns themselves are shown above the doors to the temple – the yellow is Regieleki and the red is Regidrago. We won’t tell you which you want to get because that is ultimately down to you, but enter the pattern and talk to the statue to begin your encounter.

These are two of the most powerful Regis, so make sure your team is really prepared for a fight before beginning. 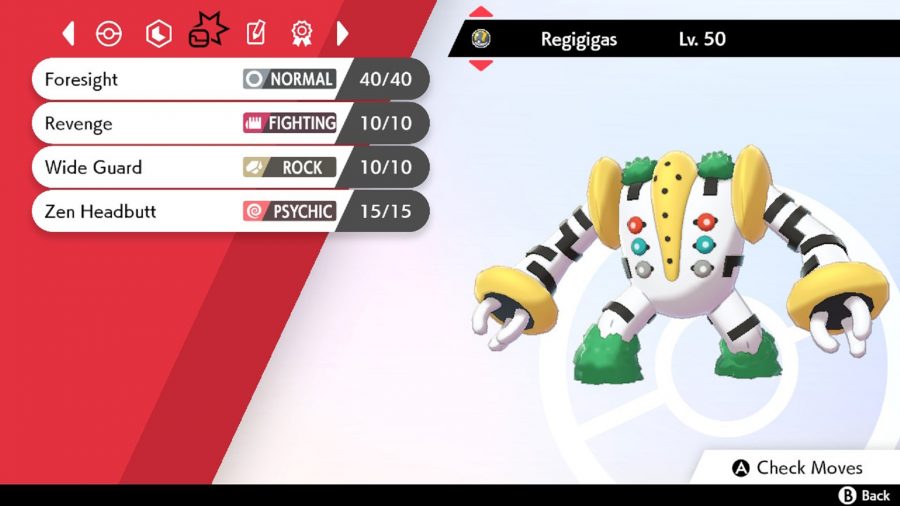 Regigigas doesn’t have a temple per se, but you can still capture it in the Crown Tundra. First of all, you must have all five Regis in your party. This means you’ll need to trade with a friend to grab the Regi that you didn’t choose.

Then, head to the deactivated raid den in Giant’s Bed. This is at the bottom of Snowslide Slope, between four boulders. You’ll know it’s the right one because it is grey, and can’t be activated with a Wishing Stone.

With all five Regis in your party, however, interacting will start an encounter with Regigigas (in a Dynamax Raid style rather than a regular battle). We’d recommend putting a strong fighting-type Pokémon at the fore of your party before starting the battle, to easily take the level 100 Regigigas on. Luckily, once you’ve beaten it, the colossal Pokémon has 100% catch rate, so you can throw any ball you want.

Now you’ve got all seven Regis, thanks to some Indiana Jones-esque problem solving and a little bit of trading, you’re well on your way to completing your Pokédex and catching every Crown Tundra legendary Pokémon. However, if you’re not sated, check out our guides on catching the Swords of Justice, the legendary birds, or The Crown Tundra’s very own King of Bountiful Harvests, Calyrex.