Genshin Impact is an expansive open-world RPG that has plenty of content, giving you hours upon hours of entertainment at your fingertips. Mihoyo continuously updates its title, bringing more content to the game every few weeks. As part of the 2.0 update, Inazuma became an explorable map, bringing with it a ton of new quests, including world, archon, and daily commissions.

In our Genshin Impact sakura cleansing guide, we provide you with details on the world quest series, including which quests are part of it, and what steps you need to take to complete them. All of these missions are in Inazuma, a vast region with multiple islands to explore. So, we recommend looking at our Genshin Impact Inazuma guide to learn more about the land, and the characters you find there.

Known fully as the sacred sakura cleansing ritual, it’s a series of world quests found in the Inazuma region.

The four quests are as follows:

You can begin the sacred sakura cleansing ritual quests after the archon quest ‘ritou escape plan.’ Following its completion, speak to Kazari in Konda Village to start a strange story in Konda. However, be aware that she appears as ‘???’ on your screen. Her name appears correctly after your initial interaction. 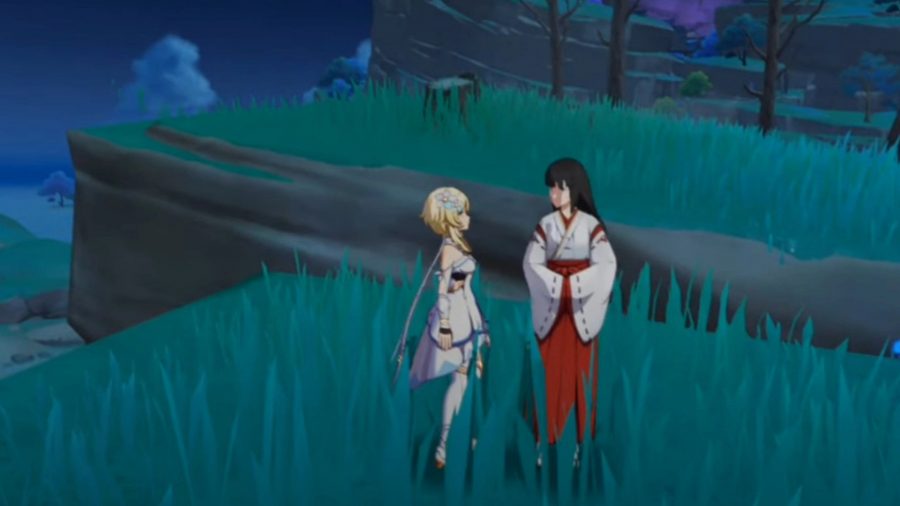 A strange story in Konda

This is the first quest in the sakura cleansing ritual series, and as previously stated, it begins by speaking to Kazari in Konda Village – she’s standing near the fox statue.

Your first step in this quest is to use the electro element on the sky kitsune statue, which in turn allows you to collect the ward, an item that will prove useful as the quest goes on.

Next, you return to Konda Village, where you speak to three locals, asking them for information.

The three villagers are:

Upon speaking to those three, you then seek out the chief, getting more information out of him. Now, it’s time to embrace your inner Scooby and look for some clues.

The three clues are:

After gathering all that information, and the clues, it’s time to strike a deal with the village chief. Next, you find his diary on the rooftop, which in turn leads you to the old key that then allows you to enter the well in Konda Village.

The final step of the quest is exploring the well. Lastly, you return to Kazari to complete a strange story in Konda. 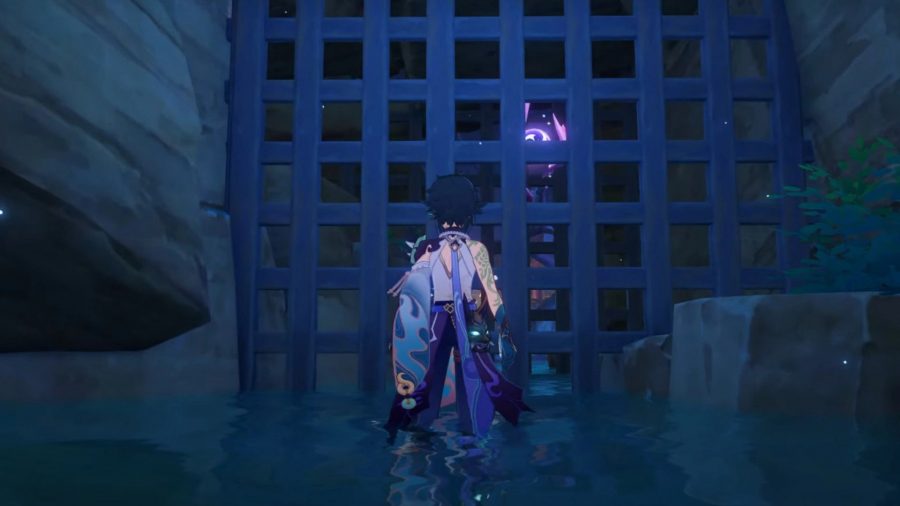 The second quest is sacrificial offering, which begins at an abandoned shrine to the Northeast of Konda Village.

To the East of the shrine, there’s a sky kitsune statue. Investigate this to trigger the appearance of three mystery shadows. Speak to all three of these figures to progress the quest. Once all three of them vanish, you receive the sacred sakura cleansing summary.

Next, it’s time to head to the Grand Narukami Shrine. Once here, you need to speak to Inagi Hotomi to get the memento lens – an item that allows you to see more than the naked eye.

Upon returning to the abandoned shrine, use the memento lens to view some different scenes, three of which feature words that you need to recite in front of the sky kitsune statue

The three sentences are:

After successfully reciting the words, you receive a ward.

Right, now that all the investigations are dealt with – for this quest at least – it’s time to go and find the barrier. It’s in a cave to the South of the Grand Narakumi Shrine, and to the North of a nearby lake.

Upon entering the cave – either through using the rust-work key or second entrance – there’s a puzzle that needs completing to destroy the barrier. Of course, as you’re nearing the end of the quest, a mini-boss shows up in the form of a samurai.

After defeating the samurai, go and speak to Kazari near Konda Village to close the quest.

If you need more guidance, check out our Genshin Impact sacrificial offering guide, where we go into more detail. 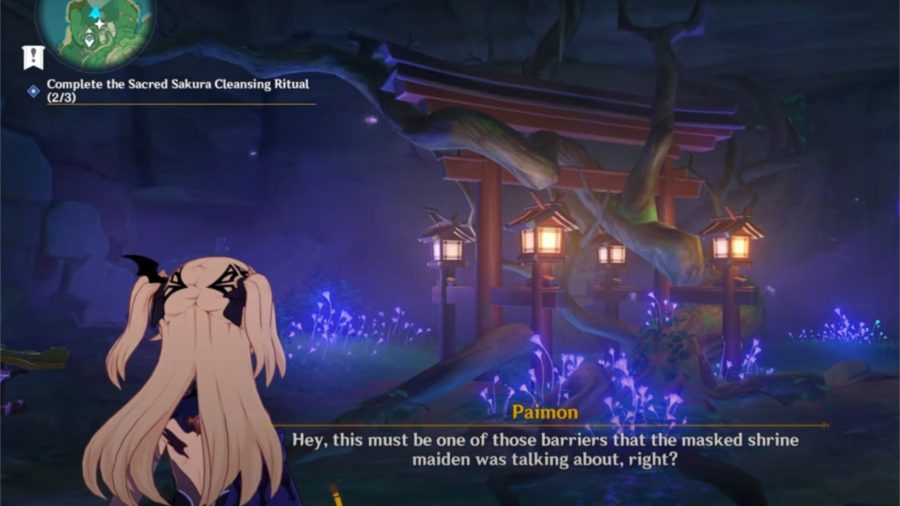 The third part of the sacred sakura cleansing ritual quest series is cleansing defilement, which is split into three different rituals. To complete the quest, simply complete all three rites – the order in which you do this doesn’t matter.

To complete the ritual in Chinju Forest, you must first teleport to the location. Once here, head towards the massive tanuki statue, and talk to it – though make sure you deal with the electro cicin mage and hilichurls first.

Next, Ioroi asks you to play with three tanukis. The first is the path near some gates. Light the torch there to reveal the first tanuki. The second appears as a barrel, with hilichurls surrounding it. Finally, the third leads you to three unlit torches. You find the third tanuki by lighting the middle one, thus completing this step in the quest.

After claiming the ward left from the previous step, you must follow directions until reaching a Torii gate. There are four lanterns here, all of which need setting to the correct number. Only then can you activate the first lantern.

The final step of this ritual is to defeat the Ochimusha – a ghostly samurai.

This ritual requires you to be at the Kamisato Estate, to begin with at least. From there, glide down the cliff, making sure you land by the big sakura tree. Next, look through the memento lens, as this reveals a weakness on the stone kitsune – use the electro element to receive the key-shaped ward.

Now it’s time to head towards the flat tide with the shipwreck. There’s an underground shaft hidden here, though it’s only shown after using the memento lens on the kitsune statue.

Again, there is a puzzle that needs solving, though this shouldn’t take too long. Then, unsurprisingly, it’s time for a mini-boss fight in the form of two Ochimusha – defeat them to end this portion of the quest.

To get this ritual going, you first need to head to the tower ruins and activate the four electro pillars. After that, you can use the mechanism, which gives you entry to the tower and presents you with three kitsune statues.

You know the drill by now. Use the memento lens on these statues to uncover secret mechanisms. Upon doing this, you gain entry to the caverns below. Not too far from the entrance, you need to use the memento lens, again, to make an electrogranum that grants you safe passage through the electro barrier. From here, use an electro skill of any kind on the kitsune statue to retrieve the ward.

Next, you head back to the Torii gate to complete the lantern puzzle – make sure you use the memento lens on the statues to reveal the missing lanterns. Finally, defeat the Ochimusha to end this ritual.

To fully close the cleansing defilement quest, you must speak to Kazari – she is standing near the well in Konda Village. 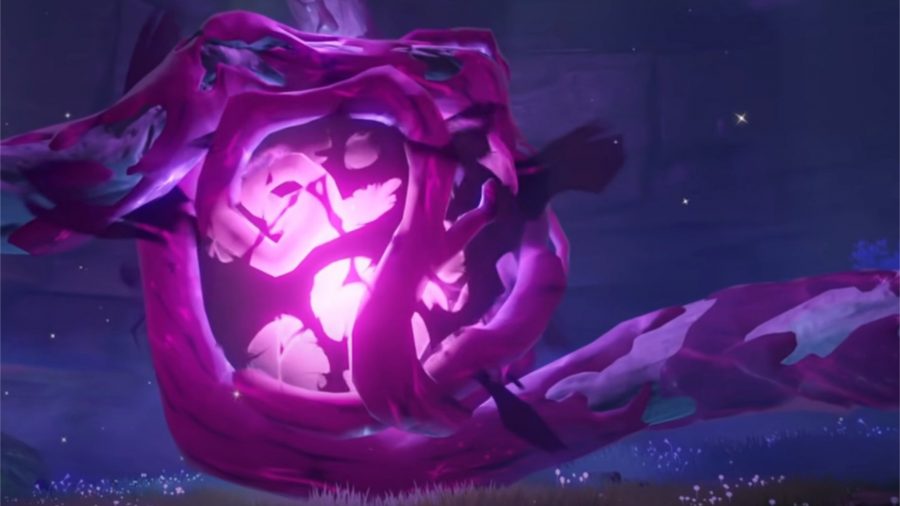 Phew, are you still with us? Good, because this is the final part of the sacred sakura cleansing ritual quest series.

To begin the yougou cleansing quest, you must speak to Kazari, then catch up with her again at The Depths of Mt. Yougou – once the barrier lifts, jump to the depths. Soon as you enter the area, it’s time to fight the Miasmic Tumor – a boss that is unique to this quest.

Of course, there are multiple steps to defeating it, given the Miasmic Tumour is the final boss of this entire questline.

The steps are as follows:

After defeating the Miasmic Tumor, return to Kazari, and pick up the mask of memories.

That’s it! You are now done with this world quest series. It’s been a long and arduous journey, but you’ve done it. You stand tall, and now have the ability to craft the hakushin ring.

And that’s everything you need to know about Genshin Impact’s sacred sakura cleansing ritual quest series. If you’re after something new to play, check out our picks for the best mobile RPGs. Alternatively, you could look at our choices for the best Android games and the best iOS games for a wider variety.