Pokémon Unite is a MOBA that puts you in 5v5 matches to determine who the best team is through scoring goals and defeating enemy Pokémon. You can take part in casual or ranked matches, depending on how competitive you are. But, of course, you can’t do battle without your trusty companions – the Pokémon themselves! Pokémon Unite comes with a diverse roster, comprised of fan-favourite creatures from across multiple generations, including Pikachu, Charizard, Zeraora, Greninja, and more.

Our Pokémon Unite Sylveon guide aims to provide details on the best build for Eevee’s Fairy-type evolution, this includes our recommendations of which abilities to choose, and which held items you should equip. We also touch upon which battle item is the best one to take into matches with you.

Sylveon is a strong, ranged attacker that does well in both top and bottom lanes. It has great balance between offence and defence, and scales well in early and late game, but can be tricky to use effectively and needs proper set up and support from team mates.

Sylveon’s first evolution, Evee, has a different passive to Sylveon. We’ve listed both below. Thanks to the passive, as long as you keep attacking you’ll stack up on special attack and special defence in no time. Spam your moves as much as possible to ensure you’re fulfilling your maximum potential as this champ.

Like Sylveon’s passive, Evee and Sylveon have different basic attacks.

Baby-Doll Eyes is a super important move for setting up moves, especially as you get your level four abilities. With the target’s reduced movement speed, Mystical Fire or Hyper Voice will be able to deal massive damage.

At level four, you can upgrade Swift into one of the following. Hyper Voice is a great general choice due to the safety of its range and low cooldown. Mystical Fire has great damage potential, but as it chooses random targets it can be a bit hard to use during team fights, but is very strong in solo duels.

At level six, Baby-Doll Eyes can be upgraded into one of the following. Calm mind is currently considered the better choice as it offers a strong damage boost and some great survivability. Additionally, Draining Kiss‘ link between Sylveon and the enemy can be severed by mobility skills or battle items like X Speed or the Eject Button, making it very situational.

Sylveon’s Unite Ability is super handy, as you can control the direction and where you want to land, meaning you can hop over walls. This is great for ganking, flanking, or a good old escape.

What are the best held items for Pokémon Unite’s Sylveon?

The following items should be useful when using Sylveon: 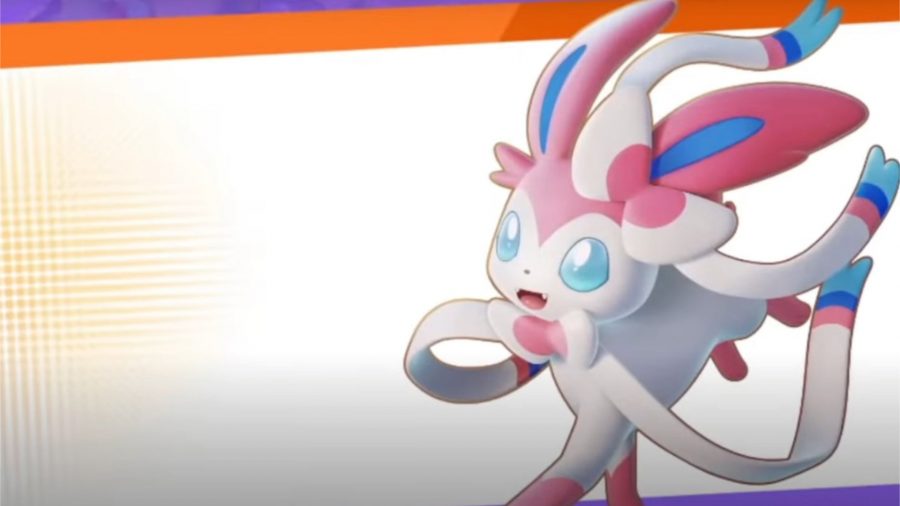 What is the best battle item for Pokémon Unite’s Sylveon?

These are some great items that will likely aid in battle when using the fairy Eeveelution:

Who does Pokémon Unite’s Sylveon work best with?

Of course, Sylveon plays nice with others – just look at that face – but there are some specific pals that will really give you a helping hand.

And that’s everything we have on Pokémon Unite’s Sylveon for now. Be sure to check out our picks for the best Switch RPGs if you fancy taking a break from all this Pokémon training.