Genshin Impact’s Itto is ‘the man’. Also known as Arataki ‘the one and oni’ Itto, or Arataki ‘he might lose but he’ll never admit defeatto’ (all his words, not ours), he’s a larger than life five-star geo claymore wielder, with a huge personality and a competitive spirit that never fails to get him in trouble. Hailing from Genshin Impact’s Inazuma, he’s half oni and the head honcho of the Arataki gang – at least when he’s not partaking in ramen eating or beetle fighting competitions.

Despite his rambunctious and somewhat oafish demeanour, this loveable goofball can sure pack a punch – and with the help of our Genshin Impact Itto build, you’ll never have to admit defeatto either. With a rundown of all of his abilities, ascension materials, best weapons and artifacts, and more, you’ll be able to master the Crimson Oni in no time, no diet of sweat and tears required.

If you’re having trouble picking your line-up, be sure to check out our Genshin Impact tier list. You should also take a look at our article on Genshin Impact’s Ms Hina to catch up on all the spicy details of how this awesome oni is tied to the puppy general, Genshin Impact’s Gorou.

What is Genshin Impact Itto’s banner?

Mihoyo released Genshin Impact’s Itto with the Oni’s Royale banner on December 14. We’re now getting an Itto rerun banner in the second half of version 2.7, starting on July 21, 2022. Itto’s rerun also features his fellow member of the Arataki gang, Genshin Impact’s Kuki Shinobu, along with his puppy general pal Genshin Impact’s Gorou, and the adorably frosty Genshin Impact’s Chongyun. check out our Genshin Impact next banner guide to learn more. 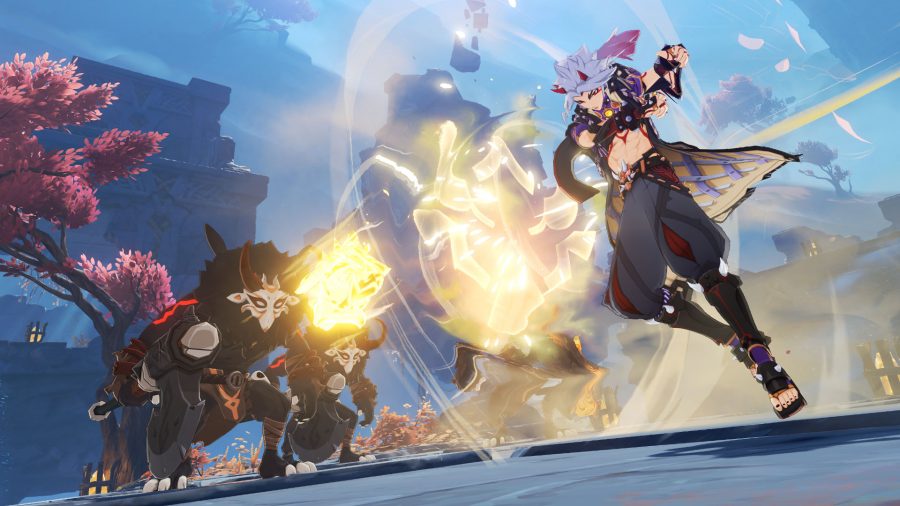 Arataki Itto is best suited as a main DPS, and is brilliant against bosses and mobs. He has a high base crit rate, the potential to taunt enemies, and his elemental burst increases his overall DPS to some tasty heights.

Though his charged attacks take some set-up to maximise their damage, when used well they are extremely powerful. His main drawback is the high cost for his elemental burst, but with some well-chosen artifacts, even that melts away in no time. Pairing him with Genshin Impact’s Gorou and Genshin Impact’s Albedo will buff his overall damage and make him a true force to be reckoned with. Find out more in the team comp section below.

The best weapon for Itto has to be the Redhorn Stonethresher, a five-star claymore that increases defence, and normal and charged attack damage based on defence. With his tankiness and the already high impact of his charged attack when imbued with superlative superstrength, this beauty will make Itto a damage-dealing machine.

However, the Redhorn Stonethresher can only be pulled on the gacha banner (with a couple of prayers to the RNG archons), so Whiteblind or Serpent Spine are both suitable replacements, which can be forged or earnt through the battle pass respectively.

As with any character in Genshin Impact, you can equip Itto with a maximum of five artifacts. Husk of Opulent Dreams is the top pick, as it is tailor-made for defence-scaling geo characters, buffing both Itto’s defence and geo damage.

However, as the Husk of Opulent Dreams is five-star, it might be a little hard to get your hands on a full set, so we’ve offered some alternatives below.

If you’re still struggling to get the sets listed above, you can use Defender’s Will as a stand-in. 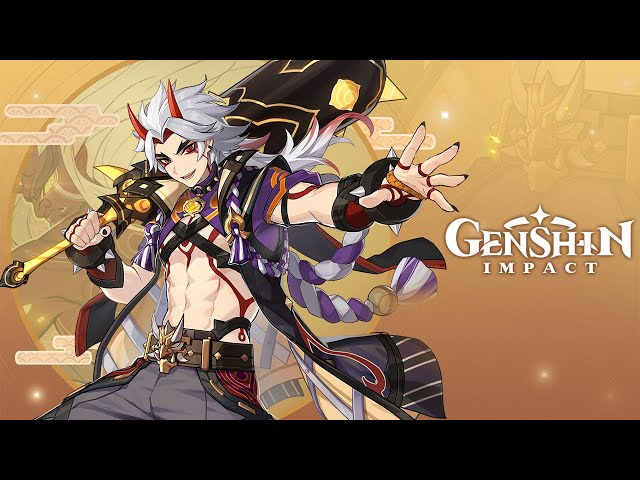 What are Genshin Impact Itto’s abilities?

To make the most of Itto’s abilities, your top priority is to collect stacks superlative superstrength. As mentioned in the skill descriptions below, you get these through hitting opponents with normal attacks or by using his elemental skill. You can gather a maximum of five stacks, and stacks are signified by a translucent golden oni mask that hovers around him. The bigger the mask, the higher the stacks.

Unleashing a charged attack when you’ve got multiple stacks of superlative superstrength deals heaps of damage – be sure to utilise it. It may take a little while to get used to, but it’ll become second nature in time, and makes Itto a truly formidable DPS. 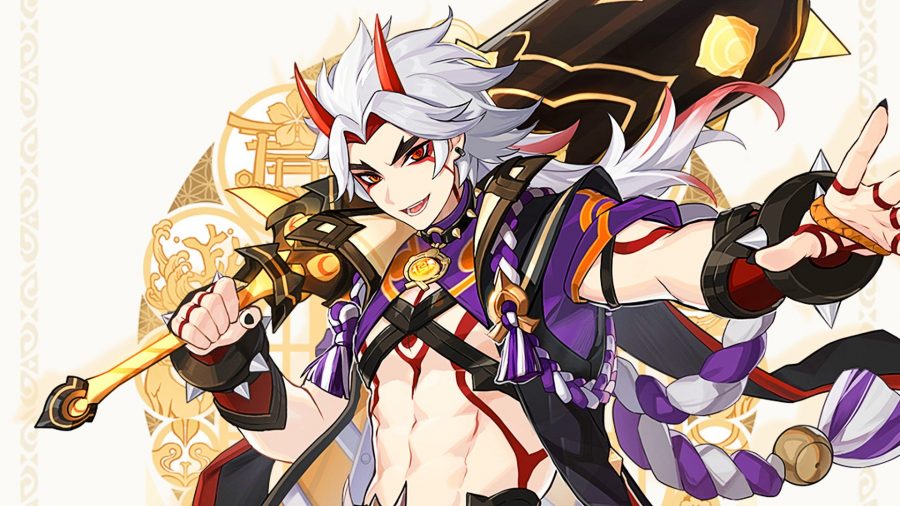 What are the Genshin Impact Itto constellations?

Here are all the bonuses you can get from levelling up Itto’s constellations. Of course, that would mean pulling him more than once – so good luck!

If you want to ascend Genshin Impact’s Itto, you’ll need to gather these materials. Onikabuto can be found around islands in Inazuma, and the Riftborn Regalia can be gathered from the fearsome boss, the Golden Wolflord on Tsurumi Island, Inazuma. 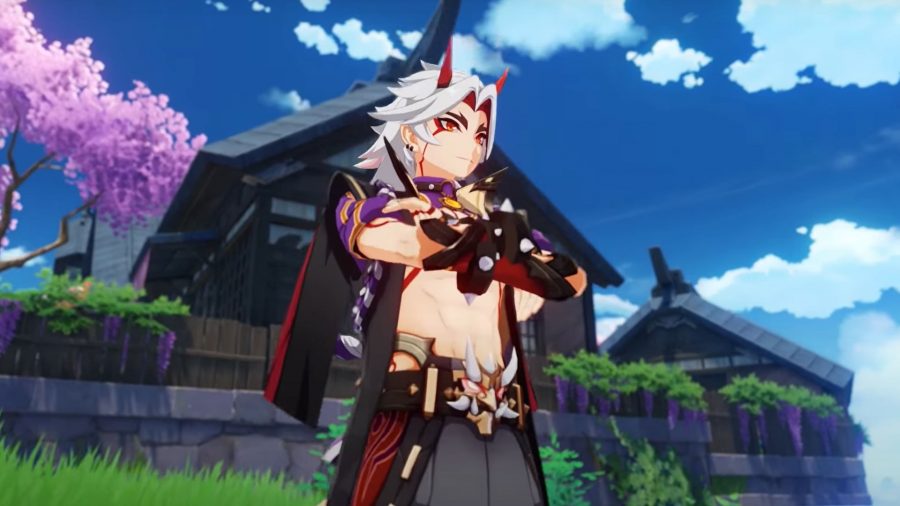 What are the best Genshin Impact Itto team comps?

Pretty much every Itto team deserves a good Gorou, as his buffs from his skill and burst do wonders for Itto’s overall DPS. When using Gorou and Itto’s bursts together, be sure to allow Itto at least one tick in Gorou’s Juuga field before procking Royal Descent, as it snapshots and you want it to hit the frame with the highest damage. This is easier to see if you have Gorou at C4, as you can hit Itto’s ult as soon as he receives one tick of healing.

Here’s an example of a strong Itto team comp:

If you have a C4 Gorou on your team, you may not need another healer, so you can fill the flex slot with Fischl for some extra off-field damage and crystalize reactions. Alternatively, you can fill the slot with Diona, who offers shields, heals, and buffs. Albedo or geo Traveler make for great geo batteries, allowing Itto to recharge his burst much quicker.

And that’s everything we have on Genshin Impact’s Itto. If you need a break from Mihoyo’s title, be sure to check out our picks for the best mobile RPGs to see what other adventures are out there.