Aboard the Herta Space station, it’s near impossible to do anything without first running it by the lead researcher, Honkai Star Rail’s Asta. This lovely young lady commands the entire space station, and is on a constant search for new knowledge to sate her curiosity.

So come along with us as we go stargazing with Honkai Star Rail’s Asta, and learn all about her personality, skills, eidolons, best light cones, and relics. Of course, keep in mind that this information is based on the second closed beta, and may change when we finally reach the Honkai Star Rail release date – but we’ll be sure to update this page as soon as we find out more about this starry-eyed scientist.

Who is Honkai Star Rail’s Asta?

Asta is the lead researcher of Herta Space Station, who possesses a wealth of knowledge about the galaxies around her. She’s a fiercely inquisitive and highly energetic young woman, who takes all of the trials of her job in her stride.

Whether it’s managing opinionated staff, dealing with gossip, handling the Intelligentsia Guild, or fighting back the fragmentum, Asta handles it effortlessly, with a polite, approachable demeanour belying a firmness that demands the respect she deserves.

Asta is a four-star fire staff wielder who treads the path of the Harmony. Her English voice actor is Felecia Angelle, and her Japanese voice actor is Akasaki Chinatsu.

Herta Space Station | Asta
"The 'tortoise' galaxies are those that slooowly give birth to new stars. The ones that use up their fuel reserves in an instant are the 'hare' galaxies."

Honkai Star Rail’s Asta is a damage-dealing support buffer with a varied kit that may seem underwhelming at first but can certainly shine under the right circumstances. She fits quite a niche role, increasing her allies’ speed with her ultimate, and buffing their attack by dealing damage through her passive.

She works best with other fire characters like Honkai Star Rail’s Hook and Honkai Star Rail’s Himeko, but is not the most sustainable without a shielder or a healer on her team, which as a support sub-DPS restricts your team lineup quite dramatically. However, the buffs she supplies are not to be sniffed at, as they can quickly sway a battle in your favour.

When building Asta, as of the beta we believe you should focus on increasing her fire damage, effect hit rate, and speed above other stats.

Which light cone should I use for Honkai Star Rail’s Asta?

The four-star light cone Planetary Rendezvous is tailored specifically to Asta’s kit. However, its skill is very specific, and is only worthwhile if you have a mono-fire team. Therefore, under other circumstances, it may be better to equip her with a different light cone, but we’ve not had the chance to test her with different light cones yet. We’ll be sure to update this section when we know more.

In the meantime, feel free to equip her with any light cone that increases her damage, buffs, or effect hit rate – just make sure that it aligns with the path of the Harmony in order to enable its skill.

Which relics should I use for Honkai Star Rail’s Asta?

As mentioned above, Asta’s kit (aside from her ult) relies on fire damage and hitting as many enemies as possible. So, as of the beta, we recommend equipping her with four pieces of Firesmith of Lava-Forging for the fire and skill damage increase, and two pieces of either Wastelander of Banditry Desert or Thief of Shooting Meteor for the increased effect hit rate (both offer a 15% increase to effect hit rate at two pieces, so go with whichever one has the best stats and sub-stats).

The benefits of increasing her fire and skill damage speak for themselves, and the increased effect hit rate is intended to help her hit more enemies with her bounce skill, so you can make the most of her passive and use it to buff the attack of your entire team.

When it comes to substats, higher effect hit rate and fire damage are always welcome. We also recommend that you should aim to increase her speed, as we believe this helps proc her passive more frequently. 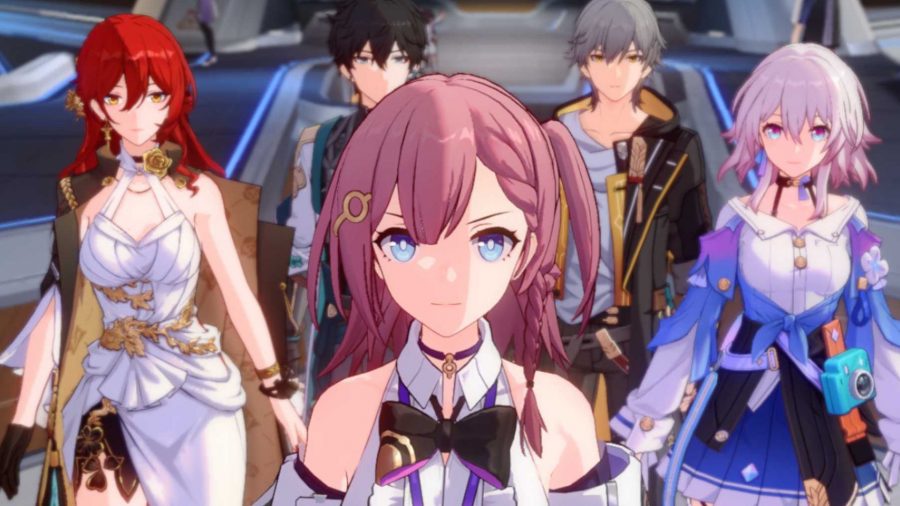 What are Asta’s eidolons?

Honkai Star Rail’s eidolons, like Genshin Impact’s constellations, are bonuses and upgrades you can unlock by pulling more than one copy of a character. Here are all of Asta’s eidolons.

And that’s everything we know about Honkai Star Rail’s Asta for now. We’ll be sure to update this guide when we find out more. In the meantime, head over to our list of the best space games on Switch and mobile for more stellar, interstellar fun.