Sampo Koski, at your service! The customers are always right… Until they aren’t. Honkai Star Rail’s Sampo is a vibrant, energetic salesman from Jarilo-VI, who always seems to be getting himself into sticky situations – whether he’s running from the Silvermane Guards, or launching into battle to save his pals.

Luckily, he’s pretty darn knowledgeable where it counts, and certainly knows how to put up a fight. And if you want this charming wild card to join your team, then you’re in the right place. Our Honkai Star Rail Sampo guide goes over his attacks, eidolons, and best build, including the top light cones and relics to kit him out with.

Who is Honkai Star Rail’s Sampo?

Imagine Futurama’s Zap Brannigan mixed with Genshin Impact’s Itto, and you’re pretty much there. Honkai Star Rail’s Sampo is a loveably goofy, silver-tongued salesman, always on the hunt to make a profit. While he may appear a little cowardly or flaky at times (the first time you meet him, he’s hiding in a pile of snow, after all), his knowledge makes him a valuable pal – though becoming his ‘customer’ isn’t always the best bet. Customers can easily become commodities for the right price, after all.

Sampo is a four-star character who has control over the power of wind, and treads the path of the Nihility. His English voice actor is Roger Rose, whereas his Japanese voice actor is Hirakawa Daisuke. 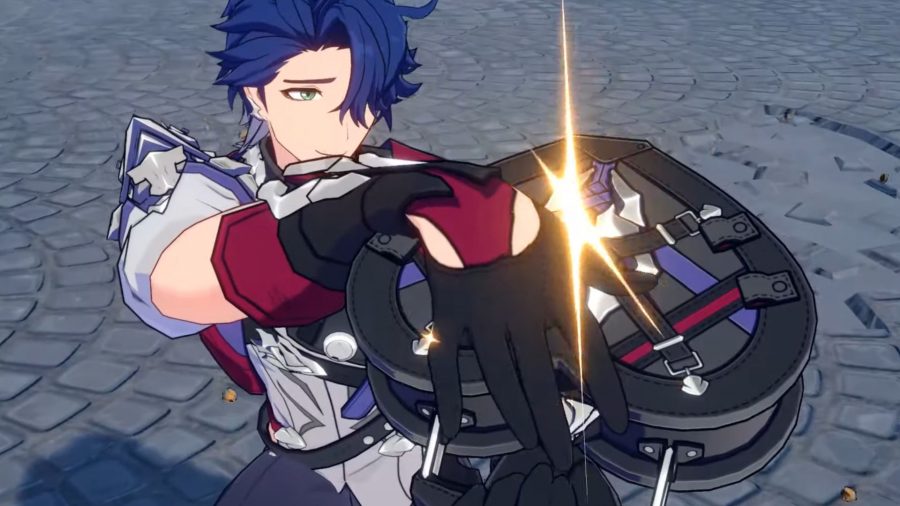 As we’re still in the beta at the moment, we’re currently learning about the fine details of Honkai Star Rail’s Sampo and his best build. However, we’ve found that, while he’s capable of putting out some good damage, his key role revolves around his utility, as he’s capable of applying DoT’s and debuffs to multiple enemies. His wind shear application and blinding technique pave the way for other high-impact damage dealers like Honkai Star Rail’s Jing Yuan to hop in and finish enemies off.

Which light cone should I use for Honkai Star Rail’s Sampo?

The four-star light cone Eyes of Prey is tailored to Sampo’s kit, and is pretty easy to get through the normal gacha. However, if you’re looking for an alternate, aim for something that also increases his effect hit rate and/or DoT damage, and ensure it aligns with the path of Nihility in order to activate its skill.

Which relics should I use for Honkai Star Rail’s Sampo?

When it comes to Honkai Star Rail’s Sampo’s relics, you’ve got two options. You can either go for a full wind damage build with Eagle of Twilight Line, or aim to increase his effect hit rate further through Wastelander of Banditry Desert.

As we’re still in the beta, we’ve not had the chance to thoroughly test them against each other, but we’ve found success combining four of the Wastelander of Bantiry set and two of the Eagle of Twilight Line set in order to reap the benefits of the two-piece wind damage boost on top of Wastelander’s handy four-piece skill.

Eidolons in Honkai Star Rail are similar to Genshin Impact’s constellations, offering you specific buffs to unlock when you pull multiple copies of the same character. Here are all of Sampo’s eidolons.

That’s everything we know about Honkai Star Rail’s Sampo at the moment. While you wait for the full Honkai Star Rail release date, be sure to check out our list of the best mobile RPGs and embark on a new adventure today.