When we first saw Honkai Star Rail’s Luocha, we said the same thing as many of you – ‘hold on, is that playable Otto?’ But, as much as Luocha may bear a striking resemblance to Honkai Impact’s Otto, he’s certainly a man of his own, setting out to heal everyone’s ailments… With a coffin by his side? Yeah, we’ve not worked out that one yet, either.

While we may have to wait until the Honkai Star Rail release date to roll around before we can learn more about that last bit, we’ve spent some time with Honkai Star Rail’s Luocha during the beta. So, in this guide, we’ll give you a little insight into who exactly Luocha is, what his attacks are, and the best relics, light cones, and more to equip him with.

Who is Honkai Star Rail’s Luocha?

Honkai Star Rail’s Luocha is a young, foreign trader who came from beyond the seas. Appearing at Xianzhou carrying a huge coffin, little is known about him other than his admirable medical skills, and his penchant for rescuing people in the face of danger.

Luocha is a five-star support unit, who walks the path of The Abundance, dealing imaginary damage and healing his allies in battle. The name of his English voice actor is currently unknown, but his Japanese voice actor is Ishida Akira, who is best known for his roles as Katsura Kotarou in Gin Tama and Gaara in Naruto.

Appearing in the Xianzhou, the blonde youth carrying a huge coffin is Luocha, a foreign trader who came from beyond the seas.

While his healing may not be as reliable as Honkai Star Rail’s Natasha due to her ultimate offering a perfect emergency button, Honkai Star Rail’s Luocha is a powerful support. He offers great heals that scale off his attack, while also having the potential to deal some impactful imaginary and true damage, and his ability to strip enemies of buffs with his ultimate can be extremely handy.

Luocha is a great addition to any team looking for a healer and all-around support unit, especially one in need of an imaginary damage dealer to take down enemies with that weakness. We found he works particularly well on a team with Honkai Star Rail’s Blade, as Luocha’s passive heals help make up for the HP Blade sacrifices during his skill. However, we’re still experimenting to ensure that Luocha’s healing doesn’t offset Blade’s passive stacks. We’ll update this guide as soon as we know more – likely when the game reaches its full release!

Which light cone should I use for Honkai Star Rail’s Luocha?

The five-star light cone, Echoes of the Coffin, was designed specifically for Luocha, boosting his attack to increase his healing, and offering buffs for his team. However, as it’s a five-star gacha pull, it may be tricky to get your paws on. If that’s the case, just be sure to pick one that aligns with his path, ‘The Abundance’, in order to activate its skill – and preferably choose one with a skill that focuses on increasing Luocha’s attack, too.

Which relics should I use for Honkai Star Rail’s Luocha?

As we’ve only had access to the closed beta, we’ve not been able to thoroughly test out the different relic sets for Luocha, but due to his primary role and utility being based around healing, we recommend going with the Passerby of Wandering Cloud set.

Alternatively, as Luocha’s healing scales of attack instead of HP, you could also mix and match sets to stack attack% bonuses. We’re currently rocking four pieces of the Passerby of Wandering Cloud set, and two pieces of Musketeer of Wild Wheat in order to get the handy outgoing healing boost skill, as well as that extra 15% attack damage on top. For sub-stats, we recommend you aim to boost Luocha’s attack first and foremost, then outgoing healing, and/or imaginary damage boost. 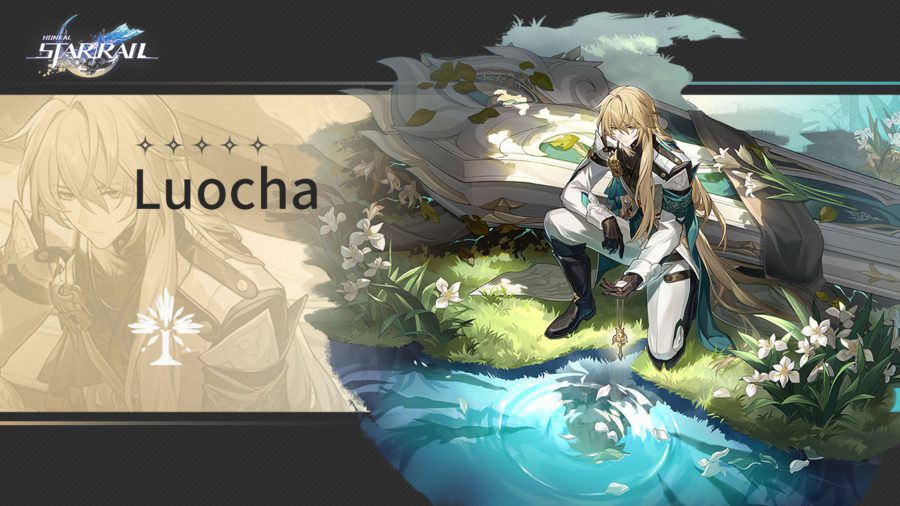 Eidolons in Honkai Star Rail are similar to Genshin Impact’s constellations, meaning you need to pull more than one copy of a character to unlock them. Here are Luocha’s.

That’s all we’ve got on Honkai Star Rail’s Luocha at the moment. We’ll be sure to add more info after the game’s full release. In the meantime, head over to our list of the best games like Genshin Impact for more fun adventures.