The Genshin Impact community is always buzzing with news of upcoming characters, whether confirmed by Mihoyo, glimpsed in trailers, or dug up through Genshin Impact leaks. With new updates coming out almost every six weeks bringing fresh events, storylines, characters, and more, there’s always a new titillating titbit to speculate over. And one of the characters on our radar is the mysterious, cold-natured but intelligent young man, Cyno.

Genshin Impact’s Cyno has appeared previously in the official manga, as well as a preview that came out way back in 2020, near the game’s release. Since then, you’ve been speculating when Genshin Impact Cyno’s release date will be, what weapon he’ll wield, what element he is, and more. Luckily, it looks like we shouldn’t have too much longer to wait – though nothing is confirmed yet. Here’s everything we know about this elusive, white-haired scholar at the moment.

If you want to keep up with the latest characters in Mihoyo’s hit RPG, check out our Genshin Impact tier list and Genshin Impact next banner guide. We’ve also got a list of Genshin Impact codes to keep the freemos flowing, so you’ll be able to pull on Cyno’s banner when he eventually arrives.

Who is Genshin Impact’s Cyno?

Cyno is a character that first appeared in chapter 12 of the official Genshin Impact manga, as well as the Teyvat chapter storyline preview. He’s a knowledgeable scholar from the upcoming region, Genshin Impact’s Sumeru, and appears to be quite aloof and stoic. His outfit seems to be based on Anubis, which fits in with speculations about Sumeru being a desert-themed, Egypt-inspired region. 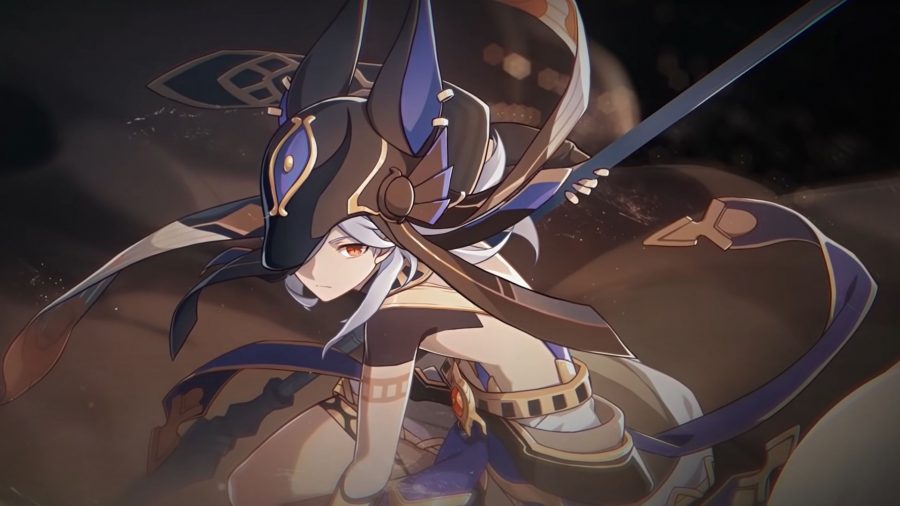 From splash art so far, we can see that Cyno wields a polearm, though this may be subject to change. He also has red eyes and a red gem hanging from his belt which may be a pyro vision, but we’re unsure if it’s actually just decoration.

When is the Genshin Impact Cyno release date?

While we’re unsure of Genshin Impact Cyno’s release date, the Teyvat chapter storyline preview suggests that Sumeru is coming in chapter three, after Inazuma. We predict that Cyno will release during chapter three alongside the new region, but nothing is set in stone yet.

What do we know about Genshin Impact’s Sumeru?

Sumeru is an upcoming region in Genshin Impact, and one of the Seven Nations of Teyvat. As stated above, the Teyvat chapter storyline video tells us that chapter three takes place in Sumeru, which is the home of Sumeru Academia and overseen by a dendro archon, meaning it might not be long until we get our paws on the new element. Check out our Genshin Impact Sumeru guide to find out more about the fresh area, and to keep on top of the latest, most plausible leaks, check out our Genshin Impact leaks article.

And that’s everything we know about Genshin Impact’s Cyno at the moment. Be sure to check back from time to time, as we’ll update this guide with any new information as we get it. In the meantime, check out our list of the best games like Genshin Impact for something new to play.